Remembering Hummam, Remembering Islam: Reflections on genocide, one year on.

Acts of injustice done
between the setting and the rising sun
In history lie like bones,
each one.
– W. H. Auden, from “The Ascent of F6″

Today marks one year since the murder of a young man outside the ISM apartment in Tel Rumeida, occupied al-Khalil (Hebron).

The shooting of the 23-year-old at 10:30 at night was followed less than 24 hours later by another blast of gun fire, when a young man was shot by Israeli army personnel beneath our lounge room windows, in full sight of my colleague. The two men, it was identified in the following hours, were Hummam Adnan al-Saeed and Islam Rafiq Hammad Ibeido.

At the time, I was among the nine or so internationals working with ISM in the face of increasingly targeted restrictions on our solidarity work in the H2 areas of al-Khalil (under full Israeli control). This was to be exacerbated just days after the murders by the declaration of the Closed Military Zone across Tel Rumeida and the surrounding district, which culminated in our eviction from the neighbourhood and a series of impossible, arbitrarily renewed military orders upon the Palestinian residents, which have continued to this day.

—A historical irony of numbered identities

The deaths of these two young men were among 70 extrajudicial executions of Palestinians across the occupied territories and 1948 historical Palestine which occurred during my short two months’ stay, the overwhelming majority of which were of men and women in their late teens or early twenties, and in circumstances where the evidence against their alleged attacks were so insurmountable, it would be laughable if it weren’t so tragic.

Since leaving the West Bank, I have watched the occurrences of these executions only sky-rocket. In the customary fashion of geopolitics with regard to Palestine, this has been met with: persistent outrage, suffering and at once steadfast and tired resistance by Palestinians; ongoing condemnation by rights organisations across the world; meagre intermittent mention by the UN; and velvet-gloved, rare, tokenistic slap-on-the-wrist rhetoric by the USA, followed by a fistful of $38bn in support. The situation hasn’t changed.

The current estimates of Palestinians to be killed in this way now number over 200, with more than 230 Palestinians being killed in total and at least 18, 000 injured in the past year. Meanwhile, the “Third Intifada” outpouring of frustration and rage through mass demonstrations and actual stabbing and car attacks, taking the lives of 34 Israelis – the supposed excuse for such blatant disregard for due process of law – are decreasing.

What remains are socialised, cultural and new legal precedents of emboldening Israeli military, civilian and illegal settler populations to act as judge, jury and executioner, with the horrifying consequence of both hysterical and calculated instances of murder with complete impunity. On the rare occasions when there has been a Palestinian witness able and willing to face the very real danger of publicly disputing the discourse of a “pre-emptive” “neutralisation” of a “terrorist,” [from an Israeli police spokesperson in regard to the murder of 17-year-old Dania Irsheid] their voices very rarely make it into the mass media.

When the terms ethnic cleansing and genocide are used by ISM to relay internationals’ interpretation of Israeli policy and the tenets of popular Zionism, it is often met with criticism, abuse, and scepticism, even amongst supporters of Palestine. I’ve found a distance between my interpretations and many would-be supporters, finding it near impossible to capture the ubiquitousness of the occupation and the dynamics of apartheid, shy of having actually being there or in a comparable situation. To use a word so historically associated with the holocaust, in which millions of Jewish people were murdered, is considered inappropriate, disproportionate and insensitive. Yet, the brazen murders of Hummam and Islam stand out to me as an iceberg tip symptom of contemporary Israeli state-sanctioned racism, and the extent to which the lived experience of ethnic cleansing has come to be normalised if not expected of the region.

They were part of a generation who have grown up entirely under the gunpoint of Zionism and their deaths are treated like history’s collateral.

On the ground, what one comes to both expect and desensitise to is a rigorous psychological warfare of oppression, humiliation and state-sanctioned terrorism. This predominantly presents itself in the physicality of checkpoints, the vast concrete wall and settlers with M-16’s. However, more insidiously and equally damaging is also the stop-and-spread body searches, the crippling bureaucracy of arbitrary permits to access food crops, night raids where children viscerally learn the meaning of insecurity, and superhero fathers are emasculated by teenage soldiers emboldened with righteousness and immunity. And then what of the psychology of the kindergartners who anticipate tear gas en route to school and are excluded from streets where metres away, settler children live illegally in stolen houses backed up by the full weight of an internationally supported state? These things which are happening in Palestine, when “nothing is happening” (From a speech by Steven Salaita at the Israeli Apartheid Week opening event, London, 2016): ethnic cleansing and genocide in slow motion.

This period of “increased tensions,” beginning around the stabbing attacks by Muhannad Halabi and the shooting of unarmed 18 year old Hadeel al-Hashlamon, only a few hundred meters from where Islam and Hummam would perish a month later, marks but moments where these policies become visible. Moments where the applicability of the 2nd Article of the United Nations Convention on Genocide: “(a) Killing…with intent to destroy, in whole or in part, a national, ethnical, racial or religious group” cannot be denied. Islam and Hummam’s deaths were among five days of executions in a row that we reached in the H2 suburbs of Hebron. For the other three, Dania Irsheid, 17, murdered at the Ibrahimi mosque checkpoint, Saad Youssef al-Atrash, 19, murdered many metres from a checkpoint, searching for his Identity Card, and Mahdi Ramadan al-Muhtasib, 23, shot from close range whilst incapacitated near Salaymeh Checkpoint, whilst Palestinian voices testified to their innocence, Israeli forces wrote a historical record of benign, thinly defended silences and double-speak. All medical treatment was denied.

These deaths make visible the current expansionist Zionist agenda – to follow with the UN definition: “(b) Causing serious bodily or mental harm to members of the group; (c) Deliberately inflicting on the group conditions of life calculated to bring about its physical destruction in whole or in part…” Where perhaps for a minute the international community pays attention to the fact that a modern colonial state feels emboldened enough to shoot at ambulances and beat medical staff in the full light of day.

When these realities were brought to a place we had slept in and worked from, the soldiers, the same men who checked our passports and performed countless body searches in front of us, we tasted the sharp edge of genocide up close: ugly. Terrifying. A science-fiction like erasure of lives followed by settlers playing festive music on the site. Maybe you won’t believe me. It happened. I haven’t found a place for it.

These are the bones of history. They have names and dates of birth, and classmates who keep an empty seat for them.

It is not lost on me that the death of a man named Islam did not make it onto the news in my home country. It is not lost on me that Islam and Hummam have been written into the dominant record as terrorists while the men who murdered them have returned to their families. It is not lost that the streets of al-Khalil have the words “Gas the Arabs” graffitied on its walls, or that the Convention on Genocide was written in 1948 in the dying spectre of WWII, and only became accessible for accession by Palestine in 2014, along with Palestinians’ first official, theoretical access to the protections of international law. 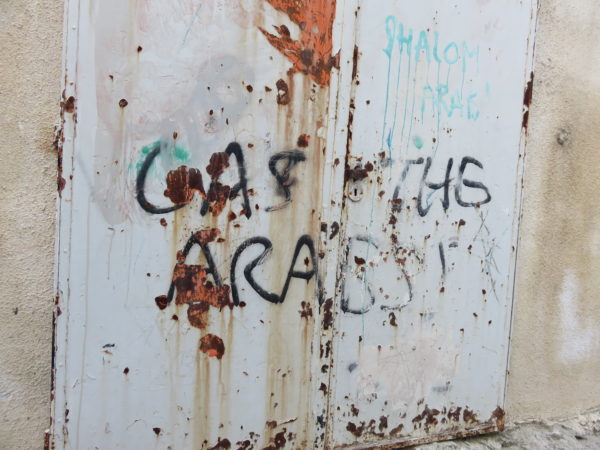 “Gas the Arabs” spray-painted by settlers from the illegal settlements

“I am 100% sure he was unarmed. I saw the two soldiers creeping slowly along the road outside our apartment window with their guns cocked, so I looked down the street to see why. I saw an unarmed man walking normally towards the soldiers and suddenly they shot.” – Orion, the ISM activist who witnessed Islam’s shooting.

And for the families of these victims, people I never got to meet, people who were not able to bury their children until 2 months later, when their bodies were “released” by Israeli authorities amid 21 others bodies, they are still there. And I cannot imagine the insurmountable suffering of their past year, or their compounded grief of life under occupation.

May their lives be remembered for who they really were, and their deaths be called for what they were.