At 10.30pm last night, Tuesday 27th October 2015, a Palestinian man who has been identified as 23 year old Hoummam Said was shot in al-Kahlil (Hebron) at the Gilbert checkpoint, directly outside the ISM apartment. The man was in the H2 neighborhood of Tel Rumeida which was otherwise quiet at the time.

No commotion, shouting or running was heard prior to the six gun shots echoing suddenly through the streets and no other security risk could otherwise be perceived. 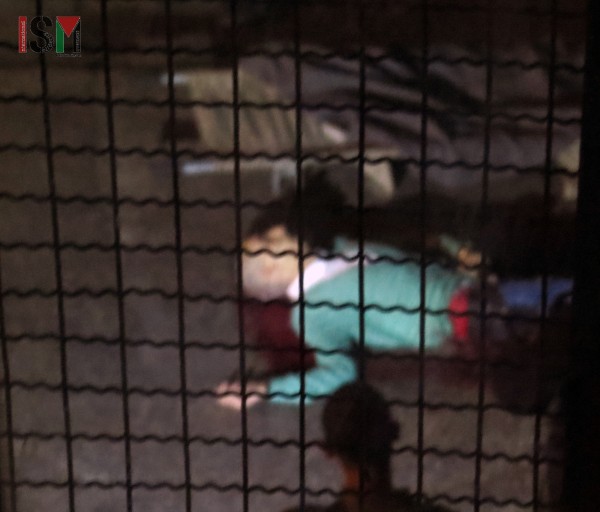 Immediately following the incident, Israeli forces, who are permanently posted at the checkpoint for 24 hours a day, surrounded the body of the fallen man. Within minutes settlers from the nearby illegal settlement arrived and were allowed to approach and photograph the scene. Further forces then arrived, including soldiers and several police vehicles. An Israeli ambulance arrived but no medical aid was delivered to Said, instead paramedics stood close to the bleeding man and watched passively as he died.

Said was then stripped of his clothes, revealing that the gunshot wounds were all on the back of his body. He was then placed in a bodybag and the street was cleaned. By midnight the scene was totally cleared of all evidence of the incident.

A short video shows Hammam after he was stripped of his clothes by Israeli forces:

Eyewitnesses reported that no knife was originally witnessed on the scene, though one appeared after the soldiers surrounded the body. “I cannot say for sure they put the knife there, but I know even 5 seconds after the shooting I looked, I really looked, and I could see nothing. I am 99% sure of it. But afterwards, it was there.” She added “if an attack was planned at this location it wouldn’t even make sense. He was still 20 meters from the soldiers or checkpoint, in the middle of the night. Why would he wave the knife around?”

Extrajudicial executions of this kind are illegal in international law and there is no evidence that warning or deescalating force was applied before the lethal shooting of Said. The checkpoint has a camera positioned above the street and the International Solidarity Movement is demanding that Israeli forces release the raw footage to prove an association between the man and the knife allegedly found at the scene.

An hour and a half after the incident, an eyewitness reported that “it is like nothing happened, there is no bloodstain, nothing but a dog sniffing the ground. The street is eerily quiet and there are just the normal number of soldiers at the checkpoint.” They added that “they cannot really feel like there is a security threat here right now.” An hour after that an illegal settler vehicle was parked by the location of the shooting, playing loud festive music.

Listen to audio of settlers playing party songs after Hammam Said’s blood was washed off the ground:

Said’s death marks four Palestinian deaths in Hebron within two days, and brings the total death toll within the Occupied Territories of Palestine to 64 since the start of October. Hebron has been a centre of the rising tension in the West Bank, and today witnessed extreme suppression of peaceful protests in Bab Al-Zawwiya, when innumerable rounds of teargas were shot directly at dense crowd of demonstrators who were demanding the release of Palestinian corpses killed by Israeli forces.

It is anticipated that with allegations that Said had a knife that no investigation will be launched, yet another Palestinian will be branded as a terrorist, and as a final injustice another family will be denied their rightful mourning rites.