On the 2nd of January 2016, thousands attended the funeral of 14 martyrs in occupied al-Khalil (Hebron). A demonstration following the funeral, against the continued killing of Palestinians with impunity by the Israeli military and Zionist settlers, was attacked by Israeli forces. 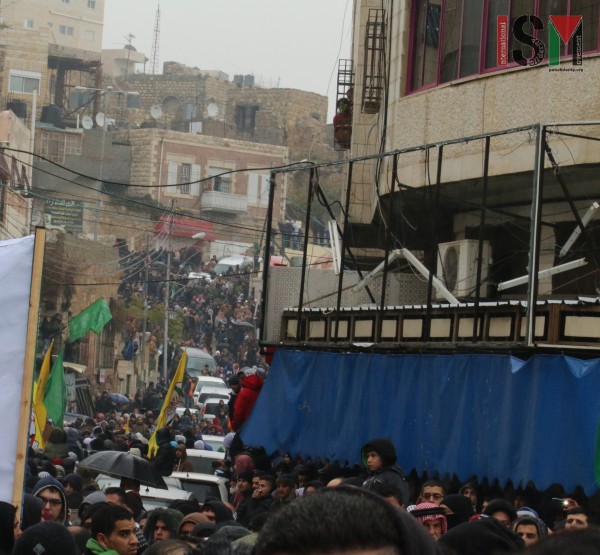 The new year in the occupied West Bank began with the handover of 23 bodies that the Israeli government had been withholding from their families, some for over two months. These 23 young Palestinians were killed by Israeli forces or settlers claiming that they had been carrying out attacks; in many cases, eyewitnesses reported that Israeli forces planted evidence on the bodies or killed the alleged attackers when they posed no imminent threat. Israeli forces then took the bodies of the Palestinians killed and the Israeli government refused to return them to their families, denying them funerals and proper burial.

17 of the 23 bodies that were finally returned to their families were from the al-Khalil district. Of these 14 were from al-Khalil city itself, and were thus buried on Saturday in the Martyrs’ cemetery of al-Khalil. Thousands of people marched in the funeral procession from the Hussein mosque to the cemetery, with the fourteen bodies carried on the shoulders of their families. The families of the young men killed finally had the chance to bury their loved ones in an appropriate manner and grieve their loss. 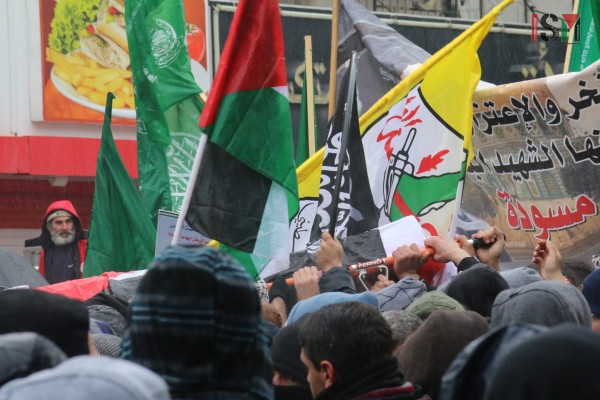 As the procession was passing by a road that leads down toward Shuhada checkpoint, Israeli forces threw stun grenades into the street even though no one was approaching or even near checkpoint.

The fourteen people buried this Saturday in occupied al-Khalil are:

After the funeral procession for Omar al-Zaaqiq, Israeli forces injured 12 protesters with rubber-coated steel bullets, including two that were shot in the head.

After the funeral in al-Khalil dozens of young Palestinian men braved wet, cold weather to gather in the streets of Bab al-Zawwiya neighborhood around Shuhada checkpoint to protest the murder of these martyrs. Israeli forces advanced from Shuhada checkpoint and threw stun grenades into the streets. They also pursued a Palestinian Red Crescent ambulance that was driving up the road with its lights and sirens on in the H1 area of al-Khalil, the part supposedly under full Palestinian control. Israeli forces stopped the ambulance and threw a stun grenade at it, forcing medics to drive back in the direction they had come.

Israeli forces occupied a building and roof in Bab al-Zawwiya, using their vantage to aim down at protesters, mock the demonstrators and throw stones at them. 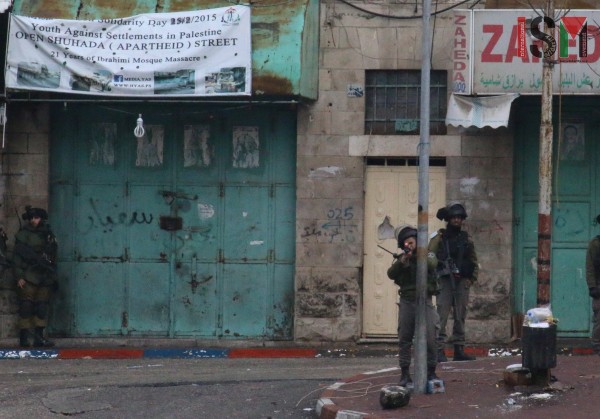 While the families of the 23 young Palestinians returned on New Year’s Day were finally able to bury their loved ones, other families are still waiting and demanding the return of the bodies of their family members killed by Israeli forces or settlers. This inhumane tactic of keeping the bodies from the families, thus denying them the possibility of holding a funeral according to their beliefs, clearly violates article 17 of the 1949 Geneva Convention: I “[Parties to the conflict] shall further ensure that the dead are honourably interred, if possible according to the rites of the religion to which they belonged, that their graves are respected, grouped if possible according to the nationality of the deceased, properly maintained and marked so that they may always be found.”