No stop to violence, settlers are taking over the streets
The Tel Rumeida neighbourhood of al-Khalil is on lockdown for Palestinians. Palestinian residents and internationals are not allowed to be on the streets, on their own roofs or at the windows of their houses. Israeli forces on the street are yelling and pointing guns at them if they see anyone. Settlers on the other hand are allowed to freely roam the streets.
Hundreds of settlers came to the spot of the killing of 18-year old Fadel al-Qawasmeh, executed by settlers this morning, to celebrate his death. The settlers, armed with machine guns are intimidating Palestinians living nearby, blocking the streets. Soldiers are not able to protect anyone anymore, a small group of Palestinians wanting to go home from a visit had to run back and lock the door behind them in order not get harmed by the settlers. Two internationals were first stopped by soldiers and ordered not to move and then yelled at to leave as fast as possible as settlers were approaching.
An Israeli ambulance with the dying Palestinian youth shot at Shuhada checkpoint by Israeli forces for allegedly attacking a soldier with a knife, was blocked by the group of settlers. An elderly Palestinian, suffering breathing difficulties had to wait for over an hour to be allowed to be carried away towards an ambulance, as the ambulance was not allowed to pass on segregated Shuhada street.

In the morning, Israeli settlers from the illegal settlements within al-Khalil, walked past the 18-year old Palestinian youth Fadel al-Qawasmeh in segregated Shuhada street, cursing him as an ‘Arab’ and then pulled a gun shooting him from point blank range. The settler fired four shots at the Palestinian youth from his pistol, one shot directly in the head. This execution was entirely unprovoked. Israeli soldiers rushed to the scene, but prevented a Palestinian ambulance from treating the critically injured Palestinian youth who was lying on the ground bleeding. Whereas the area around the execution was immediately closed for Palestinians and international observers by the Israeli forces, settlers at all times were allowed to freely stroll alongside the scene of the murder, with soldiers taking pictures with their private phones. 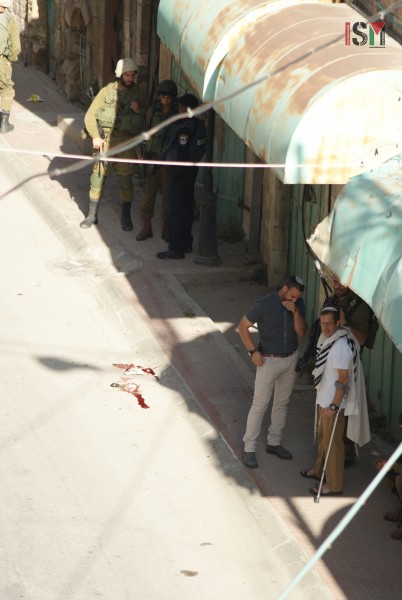 Israeli settlers standing right next to the scene of the execution

Later on, Israeli forces blocked all entrances to a Palestinian house nearby where activists where trying to document. In the meantime, settlers from the nearby illegal settlement of Beit Hadassah, watching from down on the street close by a checkpoint where enjoying tea and biscuits, brought from the settlement, with the soldiers and the police. After Israeli forces washed off the blood from the street, they broke into the house where Palestinians were filming before, with 11 children, the youngest only a year old, present. Heavily armed Israeli soldiers searched the house and confiscated all phones and cameras. Once they left the house, they were checking all the photos and videos taken after the execution of Fadel, and showed them to the settlers nearby. 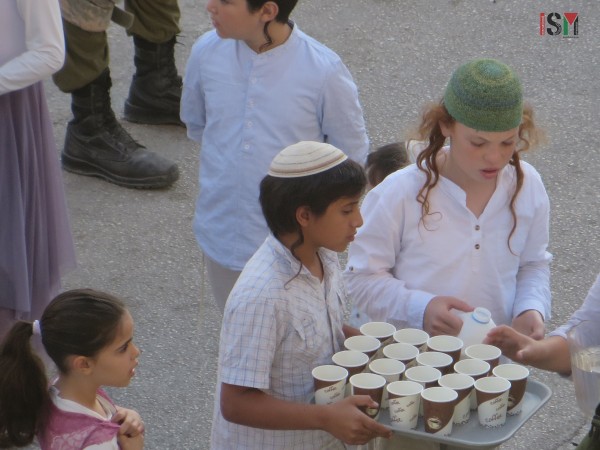 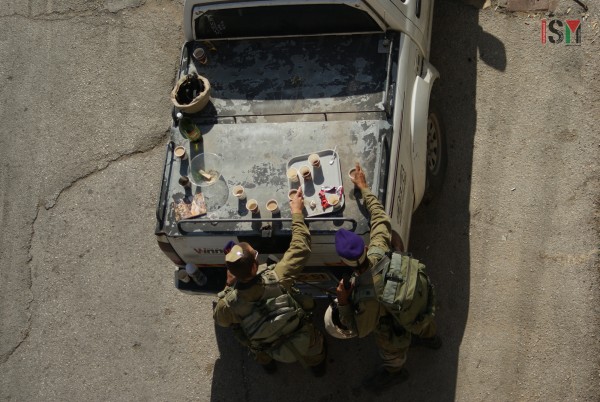 Palestinians and international human rights observers trying to document this violent attack on a family home were repeatedly forced by Israeli forces to move away from the incident, whereas the settlers were allowed to freely walk around and curse and hurl insults at them, even threatening them that they will be the next to be killed. One Palestinian man was forced by Israeli soldiers to pass through a checkpoint even though soldiers were throwing stun grenades right outside the checkpoint. 23-year old Abed al-Salaymeh was detained in Tel Rumeida for one and a half hours, after soldiers prevented him from going back to his home in segregated Shuhada Street. Different soldiers repeatedly ordered him and internationals to either move up the hill from the checkpoint, or when further up to move back down, all the time prohibiting him from going back to his house. Once up the hill, he was detained for one and a half hours, with soldiers freely admitting that this is because he ‘annoyed’ them before. Settlers passing by were threatening him and internationals that ‘tomorrow they would be the ones to be killed’. 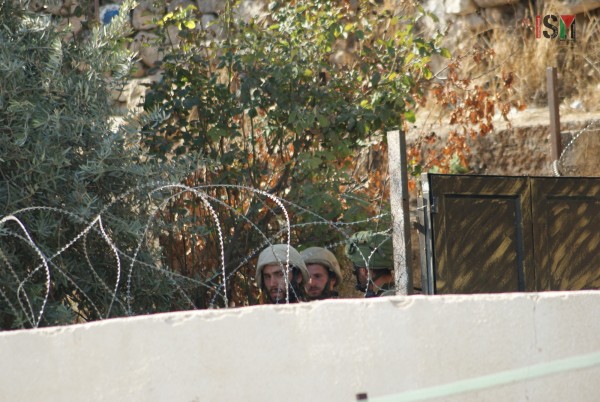 Israeli forces blocking the entrances to a Palestinian house

Only three hours later, Israeli forces shot and killed 16-year old Palestinian teenager Bayan Eiseleh at the Ibrahimi mosque. Her parents, rushing to the scene of her killing, were brutally attacked and beaten by Israeli forces. International human rights observers trying to document this senseless killing were detained by Israeli forces and then one of them was arrested for ‘taking pictures and posting them online’. She is still being held at the police station in the illegal settlement of Kiryat Arba.