At Sunday December 8 at noon, when fourteen female teachers of the Qurtuba high-school were leaving the school compound on their way home, the Israeli forces at checkpoint 55 on the Shuhada street blocked their way and kept them waiting on the stairs for more then 45 minutes.

Reason for this harassment was the personal decision of the commander to implement a new rule:

The female teachers did not accept this arbitrary new rule, and stayed where they were, waiting to get through. Finally after 45 minutes they were allowed to pass the military checkpoint as a group.

The brave women of the school have a good reason to protest this arbitrary procedure. There are many Apartheid regulations for the Shuhada street and the entrance to their school, and more of those inhuman rules are expected to come in the future. 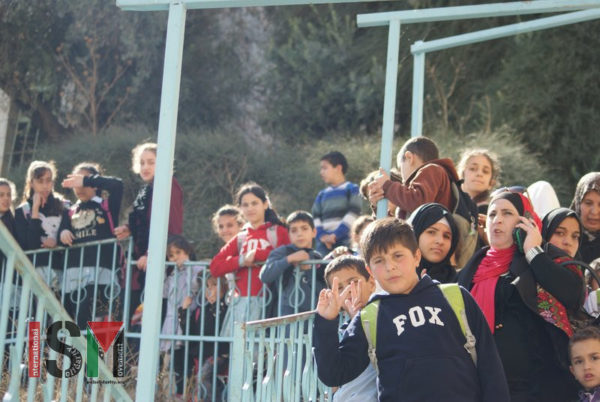 [Archive] Children of the Qurtuba school waiting on the stairs, to pass the checkpoint

If they wouldn’t protest it, the 6-10 y.o. schoolboys and 6-20 y.o. schoolgirls might be the next harassed with new implemented Apartheid rules.

For some children in occupied Hebron it can be a traumatic experience to pass these military checkpoints and heavily armed occupation forces all alone.

They go in groups, from their home to the school compound and back, passing at least two manned checkpoints.

Their teachers offered 45 minutes of their free time, after a busy school day, trying to prevent threatening new Apartheid rules, in which Palestinian children are not allowed to pass group-wise. 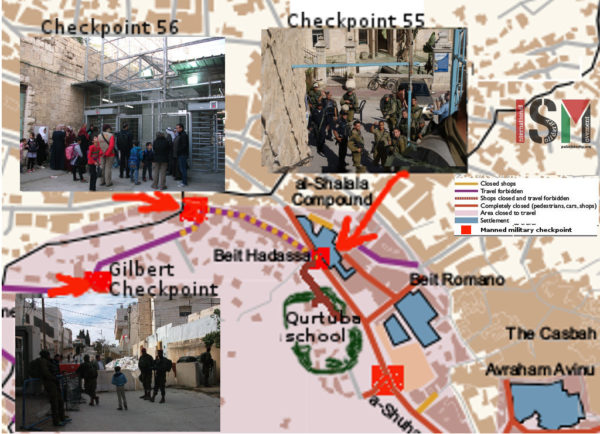 Shuhada Street and Qurtuba School. (the colors indicate Apartheid regulations) Children have to pass at least two checkpoints on their way to school

More restrictions in Hebron since september 2015, allegedly because of ‘terror attacks’

The occupier gave this violent period the name “Knife Intifada”.
Mainstream media copied this or labeled it the “Third Intifada”
The UN, Amnesty International, some countries Foreign Ministeries, and many other individuals and organizations asked for proper investigation, without success.

Gate door, installed by the occupation forces in November 2015, after an extra juridical execution.

The alleged knife attacks for which the occupation forces produced no evidence, no video footage of their security cameras, no statements by the executed suspects and no legal investigation, are clearly used as a reason for these additional Apartheid measures, i.e. less freedom of movement for Palestinians only, in their own statehood.

Most Palestinian families succeed in adapting to these inhuman situation and peacefully undergo all harassment. As long as their children have a chance to grow up undamaged, without fear or traumas, they can stay, peacefully resisting the ethnic cleansing of their statehood.

Israel is abusing International Law, and should be sanctioned by all other states

The international powers united in the NATO are liable supporters of this Israeli occupation. They are obviously abusing the international law which they agreed on and together signed, because it commits them to sanction those states who violate the regulations in it.

The Palestinian people, targeted by Zionist war crimes for more then 100 years, don’t give up their hope on justice in Palestine, knowing they have the UN and International Law on their side.