­New checkpoints, access control-buildings and street-signs in the historical center of Hebron

As for colonial Israel, nothing happens without a reason. Periods of extreme violence are followed by relative calm periods with more intense colonial construction activities and preparations for the next facts on the ground.

Palestinian  daily life is inhumanly restricted by the military occupation and by apartheid rules and regulations.  Added to that, the daily lives of the Palestinians can be traumatically dangerous because of the unpredictable military violence against Palestinian men, women, boys and girls.

Following the escalation of Israeli military violence with 230+ Palestinians killed and 1850+ severely wounded mostly from September 2015 to March 2016, the actual situation since then seems one of relative calm and seemingly less dangerous.

But, the violence is in the preparations for the next stage of the ethnic cleansing project.

The occupation forces are remarkably active in replacing three temporary checkpoints by more extended permanent ones, replacing the temporary entrance-control at the Ibrahimi mosque with a new permanent stone building, installing many military streetlights and its newest security cameras on all streets, raising more gates, concrete walls, barber-wire and other barriers, and putting new Hebrew-English street signs in the ethnically cleaned streets and in Palestinian neighborhoods, as if they are in fact Israeli neighborhoods with some remaining Palestinian residents.

In the old center of Hebron, during a period of relative silence, many new colonial structures have been put in place by the colonial occupation forces.

Three new permanent checkpoints, replacing the smaller ones, surrounding  the Shuhada Street area and a new permanent access control building in front of the Ibrahimi Mosque 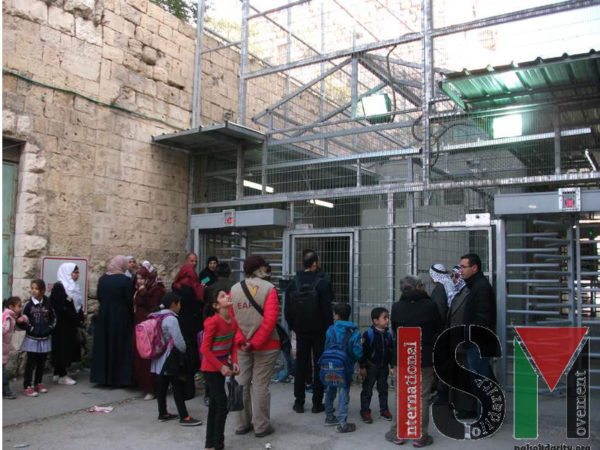 As an alleged logical result of the preceding period of violence, named ‘Knife Intifada’ in the Israel News, the Israeli occupation fortified all checkpoints surrounding the Suhada Street and Ibrahimi Mosque area.

All four new structures are in place and ready to be used for more restriction of the Palestinian residents on their way to and from their neighborhoods, their mosques, their shops and their schools.

At each checkpoint, the residents have to pass two metal turn-gates, of which one is closed by design, and  two remotely lockable doors . 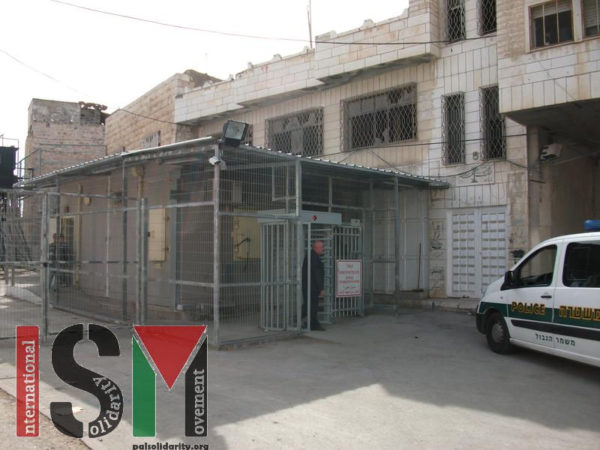 They also have to pass through a closed concrete surveillance box with soldiers behind bulletproof glass.

From outside the checkpoint,  it is  impossible to see what happens with the man, woman, boy or girl who enters this inhuman soldier- controlled room.

Imagine that you can be executed and left bleeding to die, totally unseen by other residents, journalists and human rights observers who are in the vicinity of this inhuman steel & concrete military surveillance structure.

Many new street signs, some of them replacing the traditional Arab-Hebrew-English street signs, but most of them are new signs and text boards. 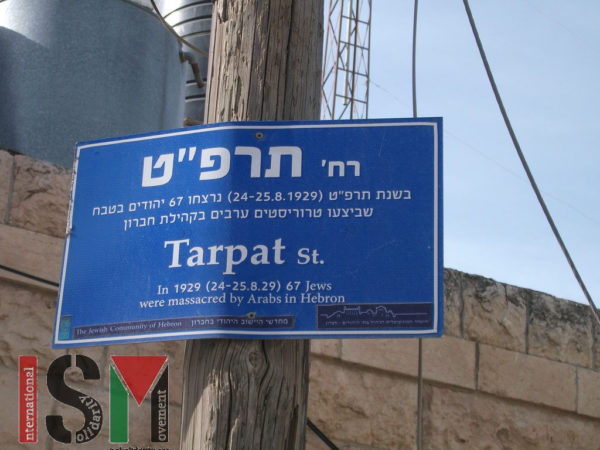 Some of these street signs, on which the Arabic language has been eliminated, point to illegal colonial settlements naming them “Jewish Neighborhoods”,   as if the colonial settlers are the only existing populations.

The other signs and text boards refer to alledged Jewish history and heritage,  as this is the true and only history in this Palestinian city-center. 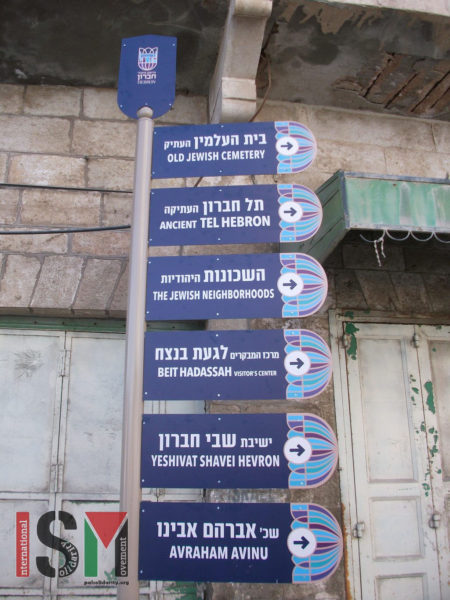 The occupation changed the name al Khalil (most of western people don’t even know this real name)  to ‘Hebron’, locking the front doors of nearly all family houses in this central part of the city.   This changes the reality in a way that it will fit into the Zionist colonial narrative, in which (Greater) Israel belongs to the Jews and the “Arabs” (Palestinians who could be either Muslim or Christian) are the intruders.

The Israeli state reserved multi-million dollars for these new signs and text boards.

The native Palestinian residents who rightfully resists to leave their homes, their neighborhoods and their lands, see their cultural identity and a prosperous future incrementally exterminated and will have a more harsh time being confronted with the next period of military occupation violence, due to the additional permanent restrictions in movement. 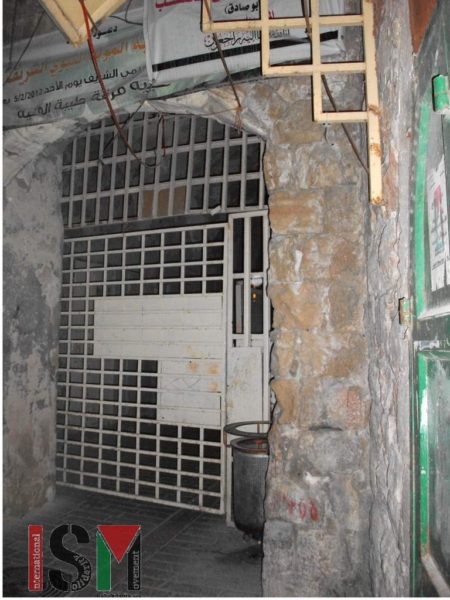 With the deterrence of their weapons, surveillance and prisons, with the threat of another military escalation, and due to the peaceful character of the indigenous Palestinian residents, the occupation forces can do what they want in occupied Palestine.

The collaborating western mainstream media and political institutions will allow them to proceed with their war-criminal agenda. International law seems to be a cynical joke.

The new Israeli legal draft that will forbid the Islamic call for the prayer is just another attack on the culture, religion and identity of the native Palestinian people, whose land and resources are stolen by the colonial Israeli State, supported by all NATO countries and Australia.

By kidnapping and imprisoning children, who traumatically have to undergo extreme psychological torture, the colonial state tries to effectively destroy the next generation of native Palestinians and any hope for a better future for the Palestinian people.

Since the execution of more then ten Palestinian residents at the Gilbert checkpoint in Tel Rumeida, this Palestinian Neighborhood is inaccessible for anyone who is not implicitly listed as an resident. Inside the neighborhood, on top of the old Jewish cemetery a new temporary army base was  built, and removed a year later. The new street signs now refer to it as the ‘old Jewish cemetery’ and a new ‘Chabad cemetery’, open for new funerals.

Next to this Jewish cemetery compound, lies the part of Tel Rumeida, that was destroyed for archaeological reasons. It is is now surrounded by a new military steel fence and made ready for  possible new settlement expansions. It already has the new name “ancient Tel Hebron” on all those new street signs.

On another compound in Hebron, between the Shuhada Street and the remaining part of the Palestinian souq, until this year in use as a temporary army base, a new colonial settlement is announced to be build. It will initially consist of 28 new colonial houses. It is, just like all settlement construction, illegal by international law.

Replacing an Israeli army base by an illegal colonial settlement isn’t a new unprecedented strategy. In the first years of the occupation of the West Bank, the colonial settlement Kyriat Arba arose illegally in a very temporary Israeli army base on the North East hill of Khalil (Hebron). Today it houses some 7000 colonial Israeli settlers, and is the reason for many restrictions, harassment and attacks on the Palestinian population in al-Khalil.

This is the sad reality of a 70 year Zionist colonization of Palestine,  the Israeli strategical approach to  non-violent Palestinian resistance since 2005, the silence of the mainstream media, the unconditional support of the US, and the refusal of politicians in all NATO countries to apply to international law and put sanctions on Israel.