More than four month ago, 24th September 2015, at the very start of the current escalation of violence, human rights group Amnesty International demanded a proper investigation in the execution of Hadeel al-Hashlamon at Shuhada checkpoint in occupied al-Khalil (Hebron) on 22nd September 2015. Amnesty consideres it proven, that the 18 year old female student posed no threat to the soldiers who executed her and then let her bleed to death without medical help for more than half an hour.

More executions followed and they all seem to have the same pattern: Soldiers at the checkpoints gun down Palestinian men and women who just wanted to pass the checkpoints and gave them no medical care until they were dead. They put a knife next to the body and made a photograph of the body and the knife, for the ‘stabbing attack story’ in the official Israeli news.

Other human rights organizations have serious concerns too, and demanded proper investigations, such as B’tselem:

and Breaking the Silence:

While the international press blindly copied the official Israeli version of the events saying “Israel has the right to defend themselves against terrorists.” The Israeli government furthermore tries to criminalize any human rights organisation that actually did proper report on the incidents.

From then on, the Israeli Army killed Palestinian civilians every day. The number counts 167 killed Palestinians suspected of knife attacks, car attacks or trowing stones. Most of them in Hebron in the southern part of the West Bank

In the last week of October 2015, there were almost daily executions by the Israeli army in the city of Hebron:

On 22 October, Israeli forces in the Tel Rumeida neighbourhood killed Islam Ebeido (23), from the same neighborhood, while passing by Gilbert checkpoint .

On 24 October, at approximately 14:50, Israeli forces killed Sa’d al-Atrash (20), from the south of Hebron, in the vicinity of the Ibrahimi Mosque. They shot him from a range of less than 2 meters. Israeli forces claimed that al-Atrash attempted to stab an Israeli soldier. It should be noted that the area were al-Atrash was killed can’t be entered without passing through a metal detector in a checkpoint.

On 25 October, Israeli Border Police stationed at the entrance of the Ibrahimi Mosque, south of Hebron’s Old City, killed Dania Jehad Ersheid (17), from al-Hawooz area. They opened fire at her when she stopped to have her school bag searched.

On 27 October, at approximately 22:30, Israeli special troops, temporarily replacing the soldiers at the Gilbert Checkpoint in Tel Rumeida neighbourhood of Hebron killed Homam Adnan Sa’id, 23, claiming ‘he had a knife’, but eyewitnesses report seeing soldiers throwing a knife next to his dead body.

On 28 October, Islam Rafiq Obeid, 23, was shot by Israeli troops in Tel Rumeida in Hebron. Witnesses say that soldiers arrived at around 14:30, cleared the spot, then waited for the first to come, which was Islam, and killed him with over 11 bullets. Soldiers also detained Palestinian medics and stopped them from providing Obeid medical help. According to witnesses, he was left to bleed to death by Israeli forces that surrounded the area and closed it.

On 29 October, soldiers at Qurtuba checkpoint, in Shuhada Street, killed Farouq Seder (19), from Izone neighbourhood east of Hebron, by opening fire at him from behind. Israeli forces claimed that he attempted to stab a soldier. However, photos posted by Israeli soldiers on social media clearly show that there was no knife in the crime scene.

On 29 October, Soldiers at the ibrahim Mosque Checkpoint killed Mahdi Muhammad al-Muhtaseb, 23. An eyewitness told Ma’an News that he saw an Israeli soldier shoot at the Palestinian, hitting him in the shoulder. “Then the Israeli soldier approached him and shot him in the head and dropped a knife near his body,” the eyewitness added. 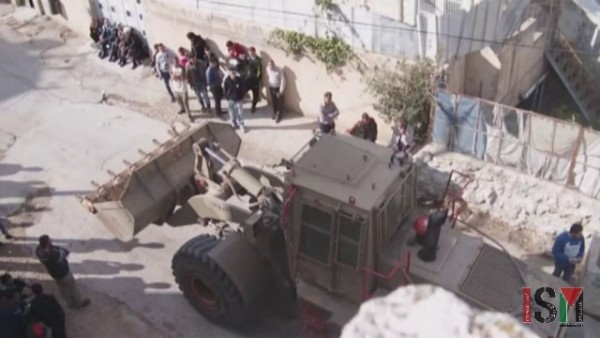 Since these assassinations, which in the Israeli press were dubbed ‘terror attacks’ perpetrated by Palestinians, families in Shuhada Street and the Tel Rumeida neighbourhood in Hebron were punished with severe restrictions. They had to register with the army, who build a new military camp in the old Jewish cemetery in Tel Rumeida, fortified the checkpoints and closed down all paths on the hill, forcing everyone to walk through the checkpoint, where other Palestinians had been killed.

Then the Israeli army declared the Tel Rumeida neighbourhood and Shuhada street a ‘closed military zone’, evicted all human right observers and closed the offices of ISM and YAS, two human rights defenders groups. Only registered residents have since then been able to enter the region but are subjected to daily harassment and threats. Illegal Israeli settlers can move freely in the area.

It’s collective punishment which is an abuse of international law. This closed military zone has now lasted for more than 3 months.

To the world, Israel is pretending to defend itself, but the assassinated men were not attacking the soldiers at all. There’s clear evidence that most of the killings were random executions.

Many residents and internationals saw the special troops arriving and checking the environment before waiting for the first Palestinian to come and kill him. They put knives next to the body to pretend they neutralized terrorists, made pictures of it, stole the dead bodies, cleaned the blood from the street and left the scene.

Families are afraid to complain or give testimony because they will surely be punished for it by the occupation forces. They know they can be killed for no reason, or have their children traumatized, injured or even killed, if they stay where they live in their neighborhood. Some families already temporarily left.

This is ethnic cleansing, a war crime, and brutal abuse of Human Rights and International Law. 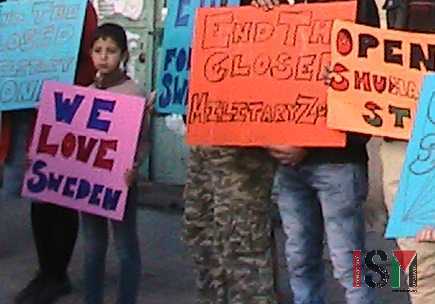 Sit-in tent against the closed military zone in Tel Rumeida and Shuhada Street.

That’s why the international politicians are slowly demanding a proper investigation into all those killings. Swedish foreign Minister Margot Wallstrom was brave enough to start demanding this, and is publicly supported by other foreign ministers.

The Israeli reaction is furious and devastating. As long as we’re waiting for more brave politicians to join this justified demand, it is necessary to support Margot Wallstrom, because she will be attacked inside and outside of Sweden.

A good start is to send a supportive message to the Swedish embassy in your country <http://www.swedenabroad.com/en-GB/Embassies/>, using the underneath text or writing your own. You may also consider writing a message to your own national and local politicians asking them to support Palestine and Walström and demand investigations of the assassinations.
To the attention of Mrs. Margot Wallström,
Minister for Foreign Affairs of the Kingdom of Sweden

I have taken notice of your stance on the necessity to investigate
Israel’s extrajudicial killings of Palestinians. I have also noted the
shameful reactions of Israeli leaders and others. It’s the ferocity and
disgrace of these reactions that urge me to speak out in support of your
remarks and integrity.

I support your position that Israel should be held accountable for what
are in fact proven extrajudicial killings. Amnesty International and other
organisations have provided plenty of evidence, as in the case of Hadeel
al-Hashlamoun, the young Palestinian woman who was executed point blank by
the Israeli army. Much of this evidence is available online, ranging
from reports to video’s and testimonies. They make clear that these
killings are no exception, but part and parcel of the structural Israeli
mistreatment of Palestinians.

Its not that we don’t know about the Israeli atrocities. The problem is
that we refuse to act on them. As a result the Palestinians pay the price
and Israel goes unpunished – giving the country carte blanche to proceed,
which is exactly what we are witnessing. This is why I applaud your
principled stance. If no one acts, the remains of the Palestinian society
will be destroyed before our eyes.

[If the FM of your country doesn’t support the demand:] I regret that the Foreign Minister of my own country has not acted, and has
not expressed his support for Sweden. Please be informed that I will
urge him to correct these failures.