Since the 1994 Ibrahimi Mosque Massacre, the majority of Shuhada Street – once the thriving Palestinian market and main thoroughfare connecting north and south al-Khalil (Hebron) – has been closed to Palestinians. They are completely barred from accessing it, except for a small stretch in the Tel Rumeida neighbourhood. 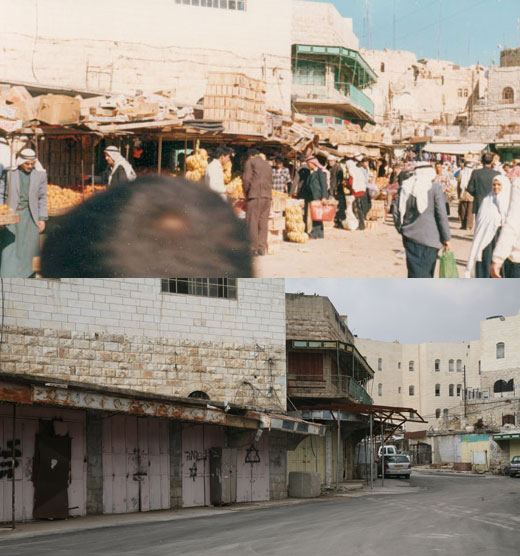 Photos of the same portion of Shuhada street – a thriving market before 1994, now an empty street where no Palestinians are allowed to enter (published by B’Tselem)

This tiny strip that is legally still accessible for Palestinians is restricted by the recently ‘renovated’ Shuhada checkpoint at the beginning of the street and ends where the street begins to border the illegal settlement of Beit Hadassah, beyond which Israeli forces assure that no Palestinians exist. Further down Shuhada street, clearly marked with yet another military post barring anyone who might attempt to enter the street, are even more Israeli settlements – all illegal under international law – located directly in the city center of al-Khalil.

The settlements on Shuhada Street are connected via a settler-only road to the much larger settlement of Kiryat Arba on the outskirts of al-Khalil; settlers can also reach the illegal Tel Rumeida settlement easily by traversing the tiny stretch of Shuhada Street still open to some Palestinians and the road leading up into Tel Rumeida from Shuhada checkpoint, now encompassed within the closed military zone. While Palestinians are allowed to walk on this part of Shuhada Street, Palestinian vehicles, including ambulances, are forbidden from driving there. Since Israeli authorities declared the area part of a closed military zone on 1st November 2015, the already barely existent access has been further restricted – Isreali forces only allow entry to Palestinians registered with them residents, while any Israeli settler, regardless of whether they are residents or not, can pass freely and without ever being harassed, stopped, detained, arrested, or threatened by the ever-present military forces. 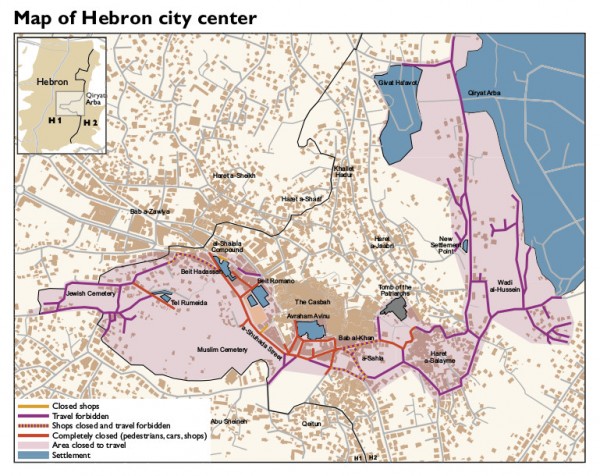 At the line demarcated by Daboya checkpoint (Checkpoint 55), where the illegal settlements on the street begin and Palestinians are no longer allowed, a steep flight of stairs leads up to Qurtuba school and into the Tel Rumeida neighbourhood. These stairs, the only way for Palestinians to continue traveling in the same direction above the street as they are not allowed to continue down Shuhada Street itself, have been closed by the Israeli forces with a metal gate since November 2015. 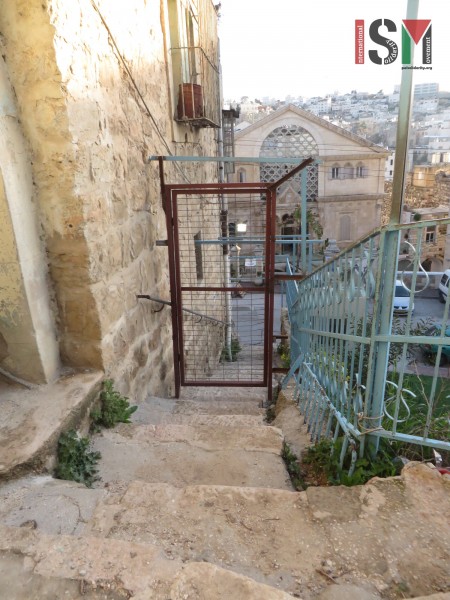 Stairs with the closed gate leading down to Shuhada Street

Even though this gate is currently not locked, Israeli forces deny any Palestinian, except for the students and teachers of Qurtuba school during school-time, to use these stairs. As a result Palestinian residents of this neighbourhood, once they have passed Shuhada checkpoint – an ordeal that can take several hours – have been denied to reach their homes by walking down Shuhada Street and the stairs leading up to Qurtuba school, forcing them instead to take a much longer detour around. With yet another way denied for Palestinans, navigating the maze of Israeli military-enforced checkpoints, complete bans on travel, roads where Palestinians cannot drive, settler-only roads, closed military zones and new arbitrary closures has become even more arduous.

Israeli forces are thereby also clearly working to minimise the number of Palestinians who will actually use this last portion of Shuhada Street – now a complete dead-end – as they bar Palestinians not only from going farther down the closed street but also declare the stairs, formerly an alternate route, yet another closed zone. This illustrates the Israeli attempts to rid Shuhada Street entirely of Palestinians. Ethnic cleansing in al-Khalil, and all across Israeli-occupied Palestinian lands is not a sudden, headline-grabbing event; it progresses gradually as Palestinians are restricted in certain areas, barred from driving there, prohibited from even being there, forced out to facilitate the expansion of the illegal settlements. Ethnic cleansing happens slowly, by erecting new and ‘fortifying’ existing checkpoints, advancing one more closure at a time.