A day after 21-year old Yasmin al-Zarou was gunned down by Israeli forces when passing the Salaymeh checkpoint, many of the children were forced to walk right past where she had layn on the ground bleeding – where her blood is still clearly visible on the ground. Yasmin had passed the checkpoint on 14th February 2016, when Israeli forces shot her several times with live ammunition, critically injuring her. Instead of administering first aid to Yasmin, lying on the ground, writhing in pain and losing massive amounts of blood, Israeli forces were busy violently attacking anyone attempting to help the injured young woman. 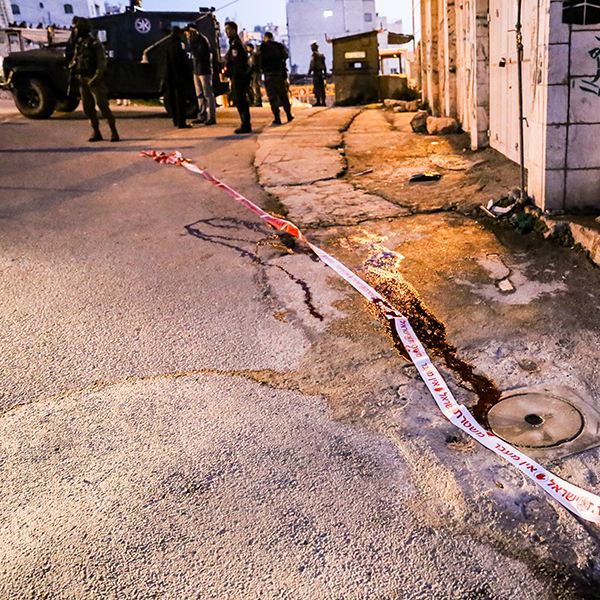 Scene of Yasmins shooting after she was taken away in an army jeep
Photo credit: Christian Peacemaker Teams Palestine

A shocking video shows Israeli medics and soldiers standing around her as she lies on a stretcher, interrogating her, not examining her or providing medical care and shoving away her outstretched hands.

A disabled man in a wheelchair was even pushed over by Israeli forces, who shortly after threw stun grenades at Palestinian residents of the area – all while Yasmin was on the ground losing blood.

The same video appeared a few days later, posted by an Israeli propaganda group – edited to make the disabled man’s crutches look like a rifle.

Even though an Israeli ‘ambulance’ arrived, no one gave Yasmin any first aid. The ambulance was driven by the infamous violent settler Ofer, who is neither medically trained nor operates a functioning ambulance, and who never provides any medical help when arriving on such a scene. He has been seen at several scenes where Palestinians had just been gunned down by Israeli forces on the claim of having knifes, always arriving in the fake ambulance, often taking photos of the dying Palestinians and instructing others not to treat them.

This video shows Ofer commenting as Yasmin lies bleeding on the ground without anyone offering first aid.

Eyewitnesses reported that Yasmin was just passing the checkpoint with her sister when she was shot by Israeli forces. While bystanders were prevented from administering first aid, Israeli forces never attempted to do so. In the end, she was taken on a stretcher in an army vehicle while the fake Israeli ambulance was still at the scene. The refusal of medical help, just a day before, on 13th February 2016, directly resulted in the death of 18-year old Kilzar al-Uweiwi close to another checkpoint in the vicinity of the Ibrahimi mosque. Even though she was shot in the neck, her autopsy indicated that her life would have been saved if she had received immediate life-saving medical treatment. Thus her death directly resulted from the Israeli forces’ policy, demonstrated repeatedly in recent months,  of denying any kind of medical help to Palestinians and instead leaving them to bleed to death on the ground.

Yasmin was taken to Shaare Zedek hospital in illegally annexed al-Quds (Jerusalem), and since then information on her condition has not been released. Her parents and family are all al-Khalil residents and must carry the green Isreali-issued West Bank IDs which bar Palestinians without a permit from visiting al-Quds (where Palestinians require blue IDs); they are not allowed to visit their daughter in the hospital and are thus left completely in the dark about her condition.

The morning after Yasmin was shot, schoolchildren were forced to pass the pool of blood that was still clearly visible on the ground, and many children living in the neighbourhood were talking about the incident the day before. Several parents whose children attend a kindergarten directly next to Ibrahimi mosque were too afraid to send their children to the kindergarten after a sleepless night following the shooting.

Israeli forces have announced that the Salaymeh checkpoint, a major passage-way for children on their way to and from school, will be closed from the 21st of February 2016 for three weeks for ‘renovations’. Such checkpoint renovations have already been carried out many times in al-Khalil, with the most recent expansion of Shuhada checkpoint making passage even more harrowing for local Palestinians.

In the past week, children on their way to and from school in the area around the Ibrahimi mosque in occupied al-Khalil (Hebron) have endured constant harassment and intimidation by Israeli forces. They face checkpoints guarded by heavily armed Israeli forces and the ensuing bag-searches, ID-checks and harassments on a daily basis. Six schools are situated behind Salaymeh and Qeitun checkpoints; the majority of their students can only reach their schools by passing one of these two checkpoints, as Israeli forces blocked off an alternative route with concrete blocks and barbed wire. Al-Faihaa girls school, located on the main road between the two checkpoints, has repeatedly been threatened by Israeli forces that their main gate will be permanently closed if any boys are seen crossing through the schoolyard and thus avoiding being forced to pass the two checkpoints. The main road which runs past the two checkpoint and the girls’ school directly connects the illegal settlements in the center of al-Khalil with the far larger illegal Kiryat Arba settlement on the outskirts of the city. Thus, on their way to school, Palestinian girls are often confronted with violent settlers trying to hit them with their cars – often driven on roads where only settlers and Israeli forces are permitted to drive while Palestinians are barred from operating vehicles – or physically and verbally attacking them.