Since the beginning of October Israeli soldier- and settler violence has increased sharply and resulted in even further restrictions on Palestinians’ everyday lives in occupied al-Khalil (Hebron). Imad Abu Shamsiyyeh, a volunteer with the Palestinian organization Human Rights Defenders, has been documenting the growing harassment, intimidation and violence by soldiers and illegal settlers alike. Since the extrajudicial execution of Hadil Al-Hashlamoun on 22nd September, Israeli forces have redoubled their aggressive targeting of anyone trying to monitor and report on Israeli crimes.

In the days since two young Palestinians were ruthlessly gunned down in the Tel Rumeida neighbourhood of the H2 area of al-Khalil (Hebron), the already intolerable situation has worsened significantly. As of the 30th October all residents of Tel Rumeida have been forced to register with the Israeli army as they declared this Palestinian neighbourhood – in contrast to the adjacent illegal Israeli settlement – a ‘closed military zone’. Imad Abu Shamsiyyeh and Human Rights Defenders called on residents to refuse to comply with these inhumane and arbitrary new military rules. But with the recent wave of extrajudicial executions and growing violence in Tel Rumeida, fear in the community has been so high that “for our survival there was no option, only to register” articulates Imad. For Palestinians the developments in Tel Rumeida exemplify “a new technique to transfer [Palestinian] families and expand [illegal Israeli] settlements”. Every time Palestinians leave their house, they are subjected to ID-checks, bag- and body searches. For relatives and would-be visitors of Tel Rumeida residents, passage through the checkpoints is denied. Often relatives find a way to sneak into the area where they then are at high risk of being arrested. Imad vividly illustrates that the Israeli forces “gave me the number 36, its just like in prison. They try to make you a number, you’re not a person”. Residents are forced to endure all this, and in addition, despite the legal requirement for law enforcement who would restrict anyones passage to produce a currently valid military order with a map showing clearly what areas are restricted, none of the residents has ever been shown such an order. abeen shown an actual military order.

In addition to these intolerable inhumane conditions that beset the daily lives of Palestinian residents of Tel Rumeida, Palestinians and internationals alike are confronted with extreme hardships and violence when documenting the ongoing atrocities by the Israeli army and illegal settlers. Imad explains that before the implementation of these new draconian measures both Palestinians and internationals were filming and documenting the everyday violence around Tel Rumeida, but now soldiers, “when they see the camera they come to you like beasts”. Soldiers have repeatedly damaged cameras and confiscated electronic devices during nightly house raids. Both Palestinian activist groups – like Human Rights Defenders and Youth Against Settlements, as well as international human rights observers have been targeted by the Israeli soldiers and police explicitly for documenting and exposing Israeli crimes. Being an activist, Imad and thus also his entire family are at even greater risk of becoming the direct target of violence.

On Saturday, the 7th of November large groups of Israeli settlers wandered the streets of this “closed military zone” escorted by Israeli soldiers. Soldiers commonly ‘temporarily’ confiscate Palestinian homes for “military purposes”, during which time they routinely lock up all of the family members in one room. On Saturday, when 70-100 settlers took over the roof of the Shamsiyyeh family home, threw rocks at the property, and deliberately destroyed the familys water pump and pipes, the family was luckily not home at that time. “The most scary is that settlers are more free to walk the area with their guns. It makes us scared for our children”. The danger brought by these illegal settlers roaming unchecked with M16s slung casually about their shoulders and with the endorsement of the military now prevents Palestinian children in this neighbourhood from being able to play outside any longer, and confines them to stay inside the house all day. The same evening, while the Shamsiyyeh family was peacefully sitting in their living room together they were suddenly startled by the sound of three bullets fired at their house. They were forced to hide in their kitchen for an hour, after Imad saw masked soldiers surrounding their house. 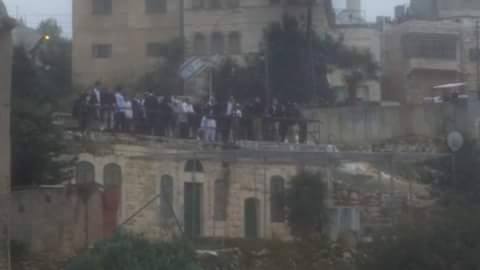 Some families have already left the neighbourhood as they see no other option to keep their families safe from the constantly increasing aggression of soldiers and settlers. Settlers face no consequences whatsoever when targeting and abusing Palestinian families and internationals, and in fact if anyone should even think to defend her/himself even verbally against this violence, generally s/he is arrested or shot . Imad clarifies that “sometimes there is no difference between internationals and Palestinians when they come to report”.

Still, Imad insists that it is essential to resist the illegal Israeli occupation and inhumane practices and continue the efforts to report on them. Although the Israeli forces do whatever they can to silence the truth, it becomes increasingly urgent that the world stops turning a blind eye on this ongoing massacre. 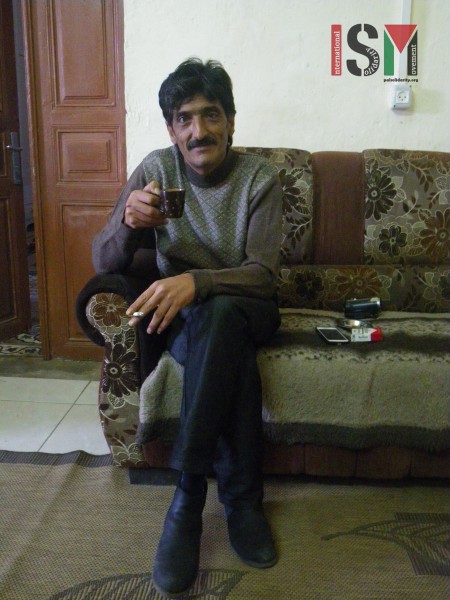 Imad Abu Shamsiyyeh in his house