New
Home / Features / Israeli Forces Murder Female Student at Shuhada Street Checkpoint: “They could have arrested her so easily but they didn´t.”

Israeli Forces Murder Female Student at Shuhada Street Checkpoint: “They could have arrested her so easily but they didn´t.”

This morning in the Tel Rumeida section of al-Khalil (Hebron) the sound of multiple rounds of live ammunition screamed out from the Shuhada Street checkpoint 56.

Standing at the checkpoint around 7:40 this morning, 34 year old Fawaz abu Aisheh ushered a few children from the scene where Israeli forces screamed in Hebrew at the terrified Hadil who was on her way to school. “They were screaming at her, ´Move back! Move Back!´ I knew she couldn´t understand so I intervened in Arabic and she listened to me immediately and I took her from the entrance to the exit of the checkpoint.”

In the photo, Hadil, in burqa, stands with Fawaz just off the foreground. “I tried to talk with her, she was terrified. She knew nothing.” Fawaz pleaded with the soldiers, who were multiplying quickly, to allow him to take her away from the checkpoint, to explain to her what was happening, to de-escalate the situation. “She listened to me immediately when first I spoke with her, but they moved me away and continued to scream at her in Hebrew which she obviously didn´t understand.” 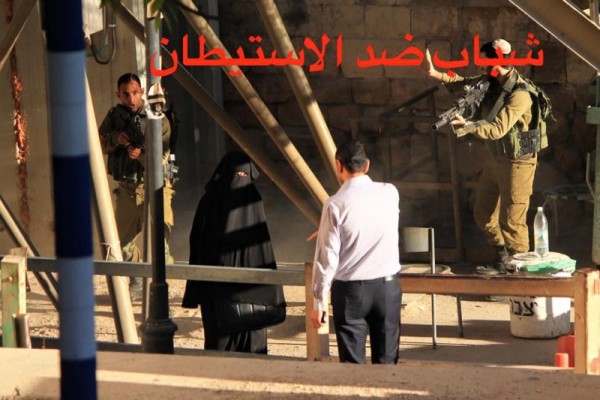 The scene, plainly described by Fawaz, seemingly had any number of alternatives to close-range, rapid fire, kill shots into a Palestinian female teenager´s body. After the fact, Israeli forces claimed the woman had a knife on her person. Fawaz challenges this contention. “She was covered completely, there was no knife showing at any time. Even if she did have a knife he could have arrested her so easily. I was there… I could have talked to her, she cooperated with me in that very first moment. I asked her to move and she moved but after that I begged him to let me talk to her but they took me away from her and started pointing their weapons at me. After they shot her more and more soldiers arrived. There were still 3 or 4 kids a few meters from the checkpoint so I moved the kids away. ”

As if the incident weren´t wholly disturbing in itself, beyond the shooting, Israeli soldiers were seen laughing, smiling and talking casually with one another as Hadil clung to life while rapidly losing blood to the concrete. Israeli settlers similarly stood in circles photographing Hadil. Fawaz noted that the Palestinian ambulance had arrived within five minutes to rush the dying girl to the hospital, yet Israeli forces blocked them from getting to her, choosing rather to let her bleed openly for forty minutes in the street until an Israeli ambulance arrived. In that agonizing period of time, an Israeli soldier was seen dragging the dying young woman by her feet.

18-year-old Hadil Salah Hashlamoun died of her wounds only after arriving at a hospital in Jerusalem. The question of whether she would have lived had she been permitted the right to be treated immediately by the quickly arriving Palestinian ambulance rather than left to bleed out for an eternity of forty minutes may never be answered.

If humanity, in any measure, exists within the occupying entity, it was shockingly absent today at the Shuhada Street checkpoint.