Saturday 4th a group of villagers from Al Towani, South Hebron Hills, held a non-violent demonstration against settler violence and illegal settlement expansion, which affects their village. This non-violent demonstration was met with harassment from residents of the illegal out-post settlement of Havat Ma’on, and a large presence of Israeli army and Israeli police. Towards the end of the demonstration a large group of settlers, the Israeli police and army invaded the Palestinian village. They were met with non-violent resistance from residents of the village and eventually spread. 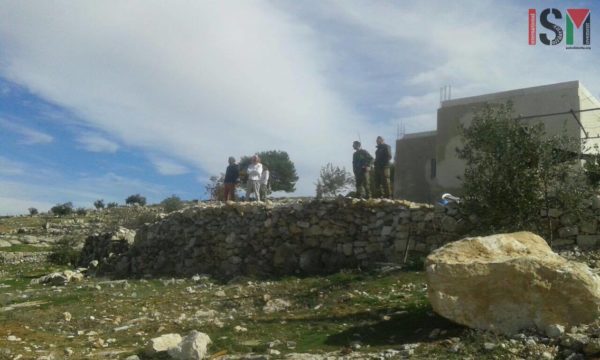 Colonial Israeli Settlers from nearby settlement, enter the Palestinian village.

At 10:00 a demonstration consisting of about 15 Palestinian villagers, supported by international and Israeli activists, left the village of Al Towani to go through the lands stolen by the illegal settlers out-posts Havat Ma’on. This is an area where local children experience violence and threats on a near daily from settlers while going about their daily lives. The demonstration was mostly women and children from the local village, protesting against the violence they experience and the continued expansion of the settlement. 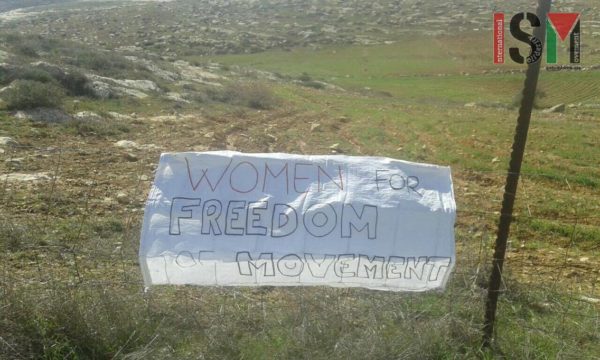 “Banner made by protesters, reading: Women for Freedom of Movement”

Upon arriving in a piece of land that is currently threatened by the illegal extension of this out-posts demonstrators stopped to sing songs, sang, and plant some olive trees. At this point, a settler from the illegal out-posts came down, openly wearing a gun and started to harass people demonstrate, filming all and calls for the Israeli army and police. 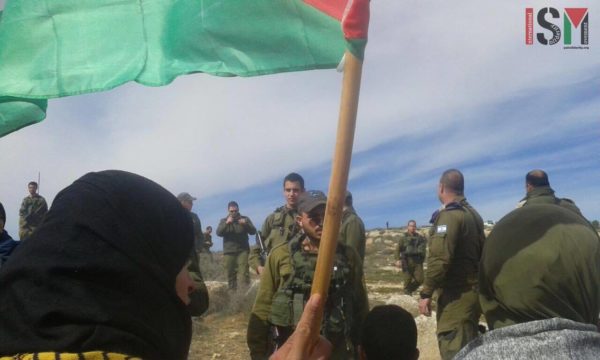 Shortly after a large group of Israeli forces arrived and the demonstration moved to another piece of land, again chanting, singing songs, and plant more olive trees. At this time came around 8 Israeli army vehicles with two Israeli police vehicles. The soldiers and police stood talking to the settlers before they came to the demonstration to declare the country a “closed military zone”. They used this excuse to disperse protesters while the non-military settlers to remain where they were. This order was non-violently resisted as did the military threaten a Palestinian man with arrest – strongly to take him away from the demonstration. At this time began to move, and the man was released. 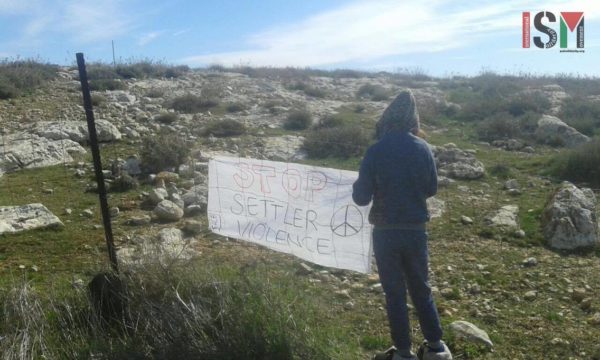 While this was going on a group of about 20 settlers from the illegal out-posts invaded local Palestinian village Al Towani. They were met with strong nonviolent resistance from the community and some of the people at the demonstration who rushed back to confront this illegal intrusion into their country. The Israeli army and police came to protect the settlers – refuses to demand they leave. It was only through the strength of the local community, as the settlers finally left the Palestinian village.

Al Tuwani is a village in the South Hebron Hills, which has experienced many problems from extremist illegal settlements and out-posts built on their land. Children of the village and the nearest face violence and intimidation by settlers and the Israeli army while walking to school which makes shepherds while we are trying to get access to land. The village has for many years been using non-violent resistance to resist the occupation.