Israeli forces are solidifying their grip on Hebron

On February the 3rd 2017, a new permanent stone checkpoint in front of the Ibrahimi mosque in occupied Hebron, was brought into use.

The checkpoint, which has been under construction since July 2016, was thus inaugurated just one month before the 23rd anniversary of the Ibrahimi mosque massacre, where 29 praying Palestinian Muslims lost their lives in a terrorist attack by Jewish settler Baruch Goldstein. It was this attack which caused the mosque to fall under the tight control of Israeli military and surveillance in the first place.

Before the opening of the new checkpoint on 3rd February Israeli forces had already installed checkpoints at all the main roads leading into the mosque. The presence of military and police at the entrance to the mosque therefore, has been a continuous fact since 1994. What is new however is the permanent nature of this new construction. For this new stone and steel construction is directly built into the mosque wall clearly signaling that Israel has no intentions of retreating from the scene. 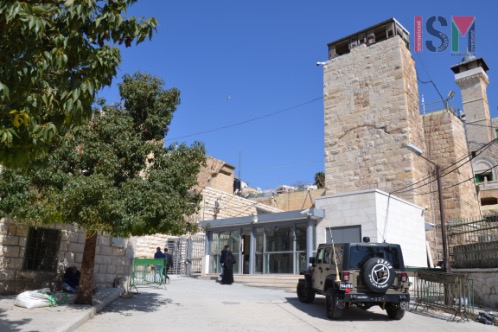 The new checkpoint at the al-Ibrahimi mosque

And the expansion at the Ibrahimi mosque checkpoint is just one among many expansions recently. As noted in an earlier ISM report [https://palsolidarity.org/2016/12/%C2%ADnew-checkpoints-access-control-buildings-and-street-signs-in-the-historical-center-of-hebron/], the Israeli forces in Hebron have been remarkably active in replacing temporary checkpoints by more extended permanent ones, along with “installing military streetlights, security cameras on all streets, raising more gates, concrete walls, barbed-wire and other barriers, and putting new Hebrew-English street signs in the ethnically cleaned streets and in Palestinian neighborhoods, as if they are in fact Israeli neighborhoods with some remaining Palestinian residents.”

One might have thought that the new checkpoint at the mosque was simply a replacement for previous ones. But since its opening, Palestinians are in fact forced to pass through two checkpoints only few metres apart, with further delays for Palestinians seeking to practice their religion, which you can see in the photo below, taken at Friday prayers. 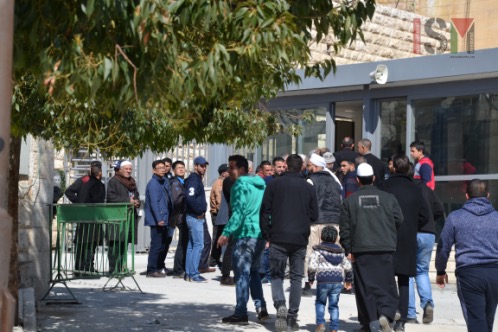 And while you might think that two security checks would suffice to determine whether an individual is a security threat or not, Israeli forces continued the practice of detaining men and confiscating IDs for the duration of Friday prayer.

But this did not hinder the male population from praying, so this Friday, a long line of men prayed outside in the sunshine, while military personnel chattered in the background. 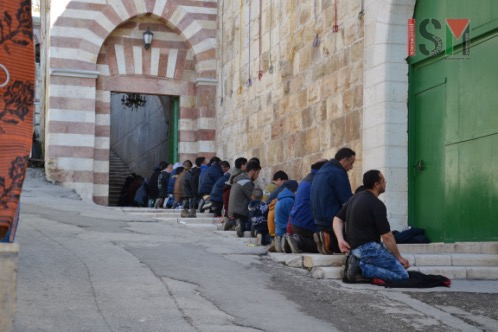