The Old City of al-Quds (Jerusalem) in the last few weeks has witnessed an explosion of Israeli forces’ presence, supposedly for ‘security reasons’. But having a closer look at – or just opening your eyes for – the multitude of restrictions, hindrances and fears aroused by this, proves that all of this has nothing to do with ‘security’ – but everything with instilling fear in the Palestinians still resisting the manifold ways the Israeli forces are trying to expel them not only from the Old City of Jerusalem, but all of Jerusalem in general.

Just two days ago, on Thursday 14th of October, Israeli forces shot and killed a 20-year old Palestinian youth. Immediately after he was shot, bystanders were forced to move back by Israeli forces, while the young man was lying on the ground bleeding to death, with no-one administering first aid. Whereas Israeli settlers from settlements within East Jerusalem, illegal under international law, where allowed to get closer to take trophy-photos of yet another killed Palestinian, Israeli forces suddenly stormed towards a group of Palestinians, threatening to beat them with their rifles and batons. Palestinians, thus, were between a rock and a hard place: run and risk being shot multiple times with live ammunition for the simple act of running away from a heavily armed trigger-happy militarised force that just killed another Palestinian, or walk away slowly and be attacked by the same army. Being forced away, Palestinians held on to their phones in their hands – prevented to take photos of the Israeli forces’ crimes – with fear high that if someone reaches into a trouser-pocket or bag to take out anything, including a phone, they would receive multiple fatal gun-shot wounds by the Israeli forces closely watching every movement of the Palestinian bystanders. Israeli settlers, on the other hand, were free to approach the body of the youth, who, in the meantime has died without ever receiving any medical attention, to take photos. The Palestinian Red Crescent Ambulance Crew right outside Damascus Gate was physically pushed back to the ambulance and then forced to leave by the Israeli forces. 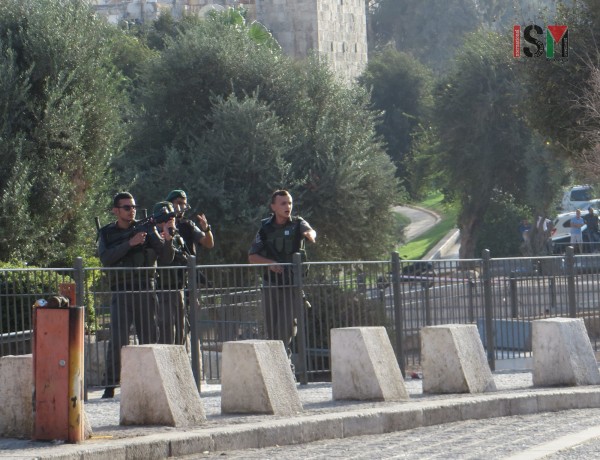 With the recent escalation of killings of Palestinians in al-Quds (Jerusalem) by Israeli forces, this is hardly an exception. This in itself, is already a message: when the killing of a Palestinian youth is no longer something ordinary, but something that just happens, something that will not be investigated under any circumstances, something that enjoys wide acceptance and often even provokes cheering by Israeli bystanders, – is it something that became ‘normal’? Various news networks have decided that instead of bringing their equipment over and over again, it’ll be easier to leave it at Damascus Gate all the time. Sanitation workers were ordered by the Israeli forces to clean off the blood of the Palestinian youth from the ground to erase every spot of the crime just committed. Police barriers are kept outside Damascus Gate, ready to close off the entrance at any time. 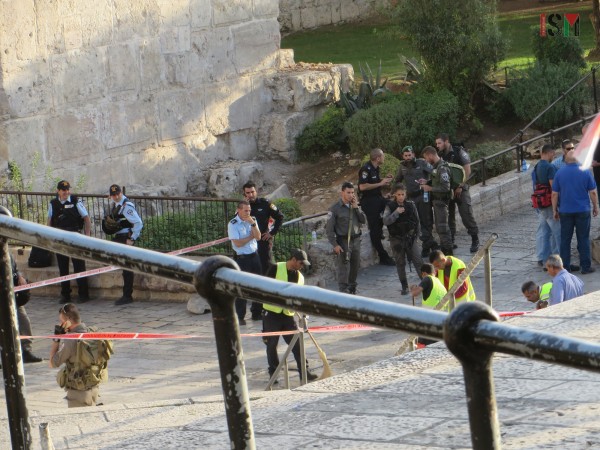 Sanitation workers ordered to clean off the blood from the ground

The Old City of al-Quds (Jersualem) is ‘fortified’, at least two, or groups of four to ten Israeli forces, are at every corner or alleyway. Every-day life for Palestinians was forced to a halt, while Israeli forces are comfortably occupying plastic chairs kept outside of shops for tourists to rest, languishing on porches where people used to play cards, or sit in front of locked shops closed in fear of the constantly rising threat of settler and police violence against Palestinians. The omnipresence of Israeli forces and restrictions, though, seem to be geared only towards Palestinians. The persons asked to pass through the metal detectors set up in the Old City are always Palestinians, ordered to lift up their shirts and trousers, take off their shoes and empty their bags even after passing through, from time to time with their children looking on in horror, children’s faces distorted by fear. For Palestinian children, there’s no place to be a child and play, with an occupying army, waiting just around every corner, shouting at children for accidentally exploding a balloon they were playing with in their parents’ shop. Parents try to keep an eye on their children at all times, simple tasks like sending them out to buy bread might result in them going missing and a frantic search – just to find out that the Israeli police arrested minor children and did not even bother to inform their parents. There is no regard for Palestinians basic human rights, or even respect for them as human beings. Whereas Israelis and tourists are free to roam the streets of the Old City, Palestinian residents are often stopped at any or even various of the checkpoints, forcing to explain again and again that they are residents, arguing for being allowed to do the most normal thing in life: trying to go back home.