VIDEO: One month for schoolchildren in Hebron: stun grenades, tear gas, and detentions

For children in al-Khalil (Hebron), the journey to school can be filled with fear, fear of Israeli soldiers, of military weapons, detentions, and arrests. The violence is all too real in this city, and it is unfortunately not an uncommon experience for children, some as young as four-years-old.

International activists try to monitor the checkpoints the children are forced to pass through on their way to school, both to document the events and to stand with the children.

ISM activists monitor checkpoint 29 each school day morning and afternoon. Over the last month, this is what the ISM activists have witnessed:

May 7th: A group of four Israeli soldiers tried to enter in the boys school and detained two young children. However, the teachers of the school were able to convince the soldiers to release both boys. After the soldiers ended the detention, they ran up the street and threw one tear gas grenade and two stun grenades at other schoolchildren. In cases like this it is clear how important the job of the teachers is in this area, and how difficult it is to is educate under military occupation.

13th May: In the morning one 12-year-old boy was stopped and searched by Israeli forces at the checkpoint, he was forced to empty his school bag before the soldiers would release him. After school ended, a 7-year-old boy was detained for 10 minutes with the accusation that he threw stones, he was released without charges.

14th May:  Israeli soldiers went through checkpoint 29 in al-Khalil (Hebron), appearing from an alleyway and threw two stun grenades at the children waiting to go to school. No stones were thrown before their weapons were used. Some of the children then threw stones towards the soldiers, who then fired one tear gas grenade. One of the Israeli soldiers repeatedly aimed his gun at both an adult in the area, and the children outside their school.

15th May: One young child threw one stone towards the checkpoint and four Israeli soldiers entered through checkpoint 29. Several children then threw approximately four stones towards the soldiers, one of the Israeli soldiers drew the Star of David (symbol of Judaism) and a crescent moon (possibly symbolizing Islam) on a car window, and then wrote, ‘I want peace’. 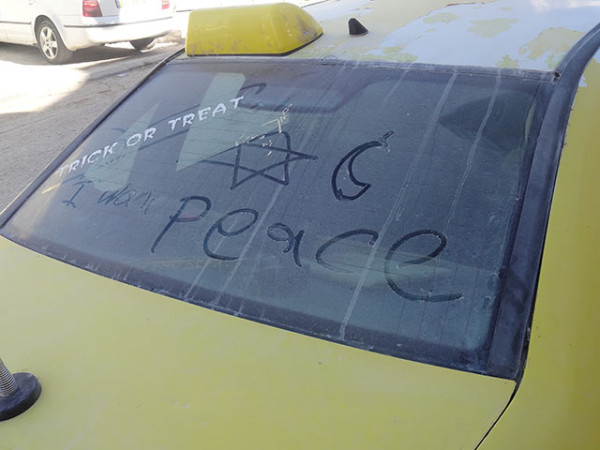 ‘I want peace’ photo by ISM

The same soldier who wrote ‘I want peace’, then threw a stun grenade at the children as they gathered to go to school.

19th May: Nine Israeli soldiers entered through checkpoint 29, several of the children then began to throw stones towards the soldiers. The soldiers then threw three stun grenades towards the children and fired one tear gas grenade. The second tear gas grenade was fired directly into Khadeagah Elementary School. An ISMer present said: “Today the children are writing one of their final year exams, it’s a terrible way to start the day and many of the kids were really afraid of both the soldiers and their weapons. This sort of aggression in the morning is common in Hebron, the soldiers don’t seem to care that they’re terrifying and tear gassing children, some as young as four-years-old”.

21st May: Several children threw stones towards checkpoint 29 on their way to school. At approximately 07:40, 13 Israeli soldiers and border police officers entered through the checkpoint and fired four tear gas grenades and four stun grenades at the children.

When the exams finished in the late morning and the teachers and school children were on their way home, the harassment began again. The Israeli military detained seven teachers for 20 minutes. One of the teachers spoke to an ISMer present: “We are used to this kind of violence and disturbance, the harassment is continuous and often twice a day”. 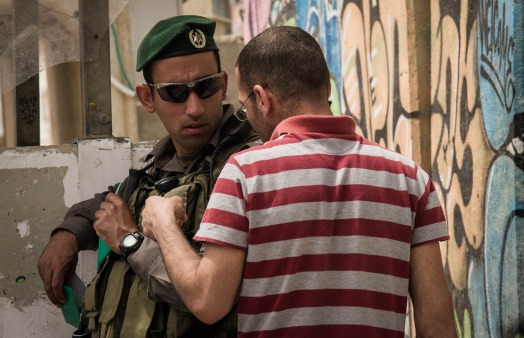 27th May: In the afternoon as the children were leaving school, one Palestinian youth was detained for 20 minutes and five teachers, from the local schools, were detained for 15 minutes. No explanation was given for the detentions.

1st June: Several children threw stones towards checkpoint 29. Israeli forces then fired one tear gas grenade, dangerously close to several children standing to the side of the road.