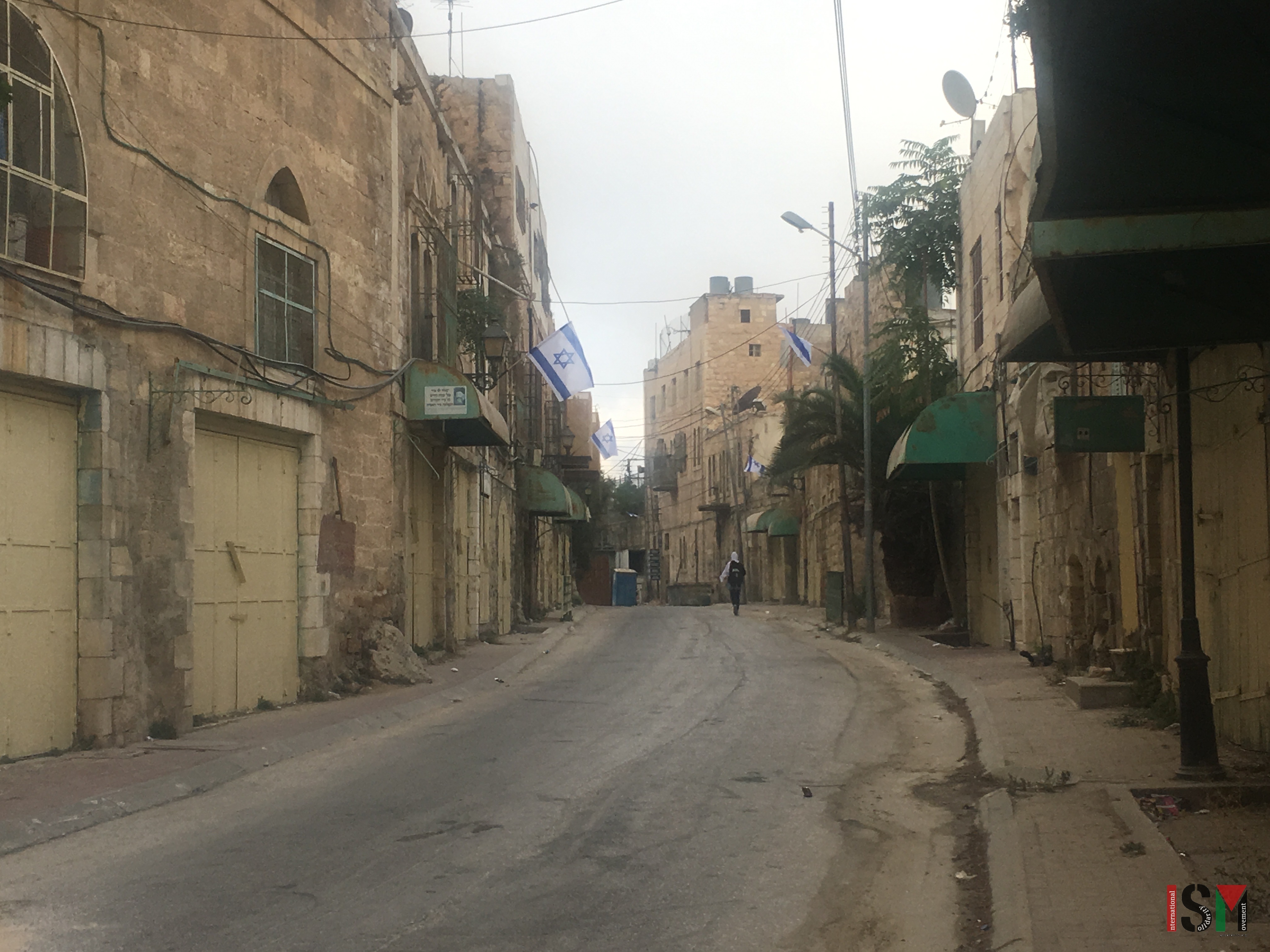 Ash-Shuhada street in al-Khalil full of Israeli flags welcoming Netanyahu. Less welcome are the Palestinians living there: they are not even allowed to access their houses through their main entrances.

I was somewhere between excited and afraid the night before the visit of the Israeli Prime Minister Benjamin Netanyahu to al-Khalil (Hebron) on September 4 this year as part of his re-election campaign and timed with a ceremony commemorating the 1929 Hebron massacre, a central element of the justification narrative employed by the Israeli settlers in al-Khalil. I was afraid that the Israeli military and police would use excessive violence against the Palestinian residents during the occasion. The last few days had already been marked by extra army patrols through the streets, more frequent ID checks, night raids and arrests of political activists. However, there was also a feeling of excitement that the controversial visit could draw attention to the various human rights violations inflicted on Palestinians and the specific border(zone) management that made them possible. Serious restrictions of movement and different forms of violence have been part of Palestinian Khalilis’ everyday lives for decades. The latter include settlers attacking their houses and assaulting them in the streets; families getting woken up in the middle of the night by soldiers smashing down their front doors to search their homes and arrest fathers and sons (no matter their age); children getting teargassed on their way from school and sometimes even while sitting in their classrooms. I could go on. As shocking as this may all sound, for Palestinians living in the Israeli controlled part of al-Khalil, called H2, this is normality. And for everyone coming from outside it quickly becomes it too. This summer, I spent a month in the West Bank, occupied Palestinian territories, to volunteer with the International Solidarity Movement (ISM). And I had to realise that even the events surrounding Netanyahu’s visit just became another dat – part of al-Khalili normality.

Al-Khalil – the occupation in a nutshell

Al-Khalil is the Israeli occupation in a nutshell. The West Bank has been occupied by Israel since 1967 and gradually transformed into a disintegrated territory dotted by Israeli settlements which are deemed illegal under international law. The order chosen by the Israeli regime to handle the presence of two different populations – Israeli settlers and Palestinians – in the same territory is based on borders. Borders essentially regulate who is able to move freely where, when and under which circumstances. As the two groups inhabit the same space, bordering results in a system of segregation that traces through society instead of geographical fixed points. This manifests itself in a segregated road system throughout the West Bank and – less visible by eye but even more far-reaching – in two different legal systems leading to drastically unequal treatment for Israelis and Palestinians. While Israeli civil law is applied to the settlers, Palestinians are subjected to military law. In the old city centre of al-Khalil this order reaches its peak.

Al-Khalil is divided into two areas: H1 which comprises 80% of the city and is formally under control of the Palestinian Authority (PA) and H2 in which Israel retains responsibility for security matters. Al-Khalil’s old city is part of the latter and through the restrictions imposed on it over the last 20 years it has transformed from a bustling market area into a ghost town. These restrictions are part of the security measures taken by the Israeli military in order to ensure the protection of about 700 settlers living amidst approximately 7,000 Palestinians. For the latter, lives have transformed into one big restricted zone (see grey area on the map). 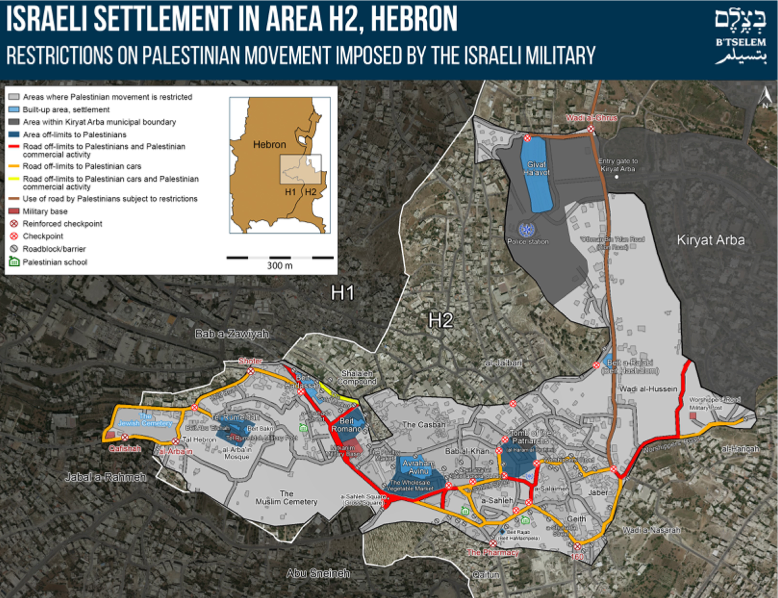 In the grey-coloured area of H2 Palestinian movement is restricted by checkpoints and various road blocks. To some roads (indicated in red) Palestinians are completely denied access.

OCHA counts 121 obstacles (walls, slabs, fences and barriers) limiting free movement in this area including 20 checkpoints, 6 of which are fortified, equipped with face-recognition technology and metal detectors. For the Palestinian residents this means that going about any simple daily activity can become a lengthy and uncertain process. The Israeli security policies in al-Khalil do not only restrict their access to health, education, housing and work but also deeply affect their family lives and social fabric. As a result of the difficult living conditions in H2 the number of Palestinian residents has considerably dropped over the years. The existence of a restricted area is based on the Hebron protocol from 1997 that lead to the division of the city and called for a buffer zone between H1 and H2. However, the function of this buffer zone doesn’t correspond to its initial idea. Rather than preventing violence between Palestinians and Israeli settlers it has become a tool for the Israeli military to exercise violence against the local Palestinian population and effect their forcible transfer. Israel thus uses the buffer zone to solidify its colonial practices under the guise of security concerns.

Another example of who draws the borders around Khalil

Back to Netanyahu’s visit: After mid-day, H2 was under near complete lockdown. There was a massive police and army presence in the streets, several of them stationed on the roofs of Palestinian houses. 3 of the major checkpoints accessing the restricted area of H2 were closed for the whole afternoon. Whoever happened to be out at the wrong time, would spend their afternoon waiting in front of a closed gate. 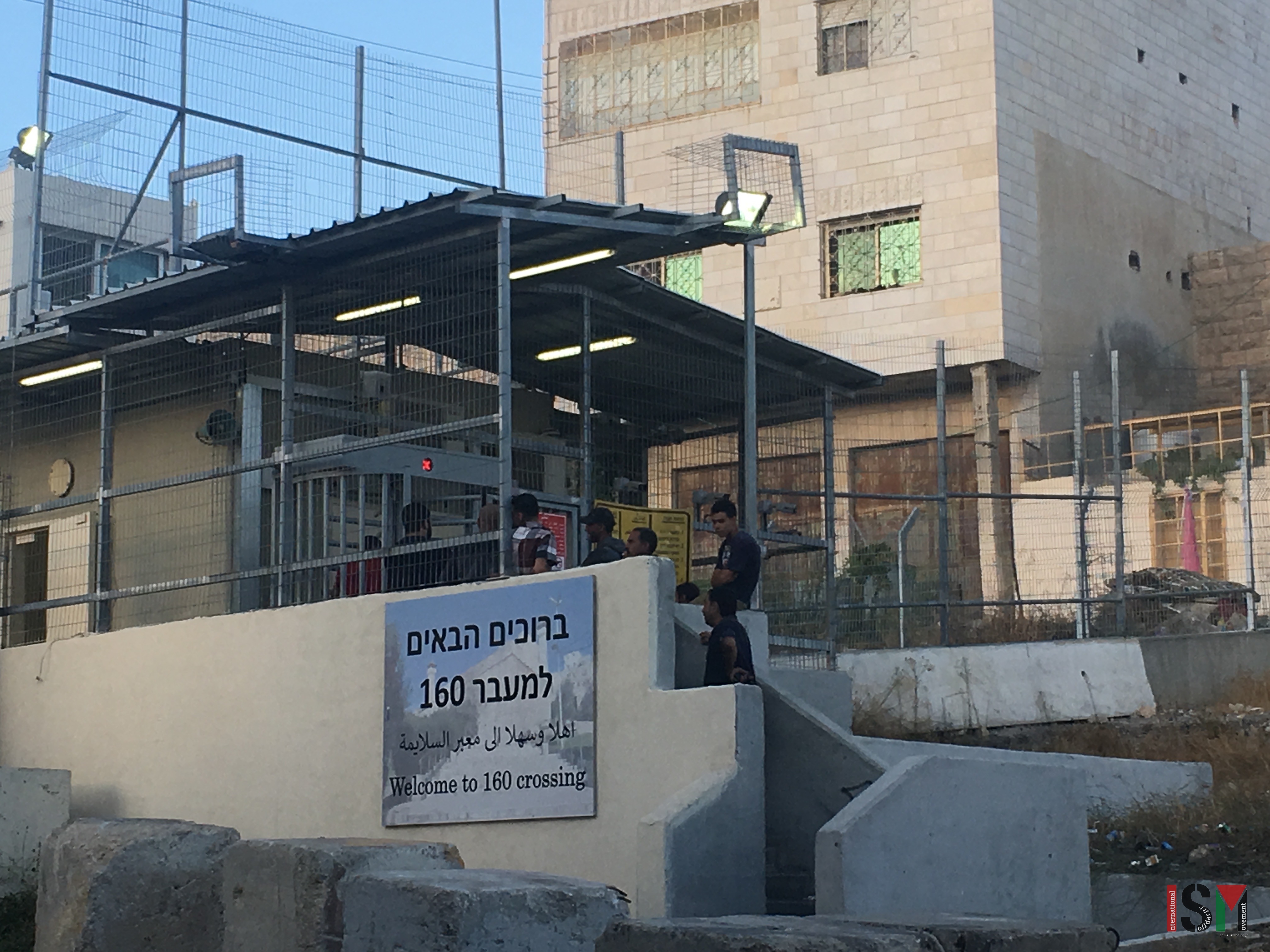 And life stands still – Palestinians waiting in front of a checkpoint that stayed closed for more than 6 hours the day Netanyahu visited al-Khalil.

In the neighbourhood where the memorial ceremony took place, the Palestinian residents were put under curfew. A small demonstration took place close to the restricted area but within H1, which is formally under Palestinian control. The Israeli military didn’t hesitate to enter the area though as well as use cars and their Palestinian occupants as shields for their operations. Two demonstrators were arrested. In the evening, I thought to myself: “It could have been a lot worse.” It took me some time to realise how normalised the situation in al-Khalil had become for me in order to come to such a conclusion. Night raids, closed check-points, curfews and arrests. All of this has been happening for decades and so the 4th of September 2019 was nothing new. It was just another example showing who draws and manages the borders around the lives of Khalilis. Whom those borders protect, and whom they hurt.