On the 7th of January in Qusra, two farmers working on their land were threatened by settlers carrying guns. Villagers helped them to chase the invaders away before being violently repressed by the army.

On Friday, at 10:30 a.m., two Palestinian farmers were working their land around the village of Qusra when they were ordered by two armed settlers to stop their work and leave the area. The two farmers refused to obey, and called members of the municipality. Soon, about 50 villagers reached the scene, immediately followed by seven Israeli military vehicles, most of them from the border police. They demanded all the Palestinians to leave the area within five minutes.

When the villagers refused to leave, the army began firing tear gas, rubber-coated steel bullets and stun grenades. The attack lasted until 3:00 p.m. Seven Palestinians were injured; four of them were less than eighteen years old.

The two settlers responsible for the attack are from the illegal colonial outpost Raheir, totaling less than ten permanent residents.

Friday’s events mark the 65th recorded attack on the village of Qusra in the past two years. Since the beginning of January, 88 olive trees have been destroyed by the settlers and one young man suffered a severe head injury. In the year 2013, 870 olive trees were destroyed and 30 people were injured, five of them severely. 3,11 dunums of land were annexed and  access to 500 more was declared forbidden for Palestinians for “security reasons .” 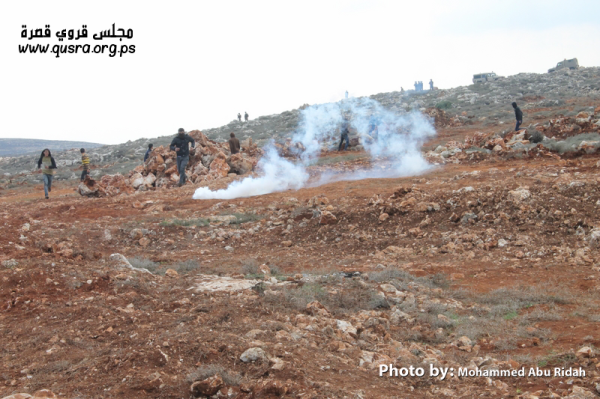