A long, bloody January in Gaza 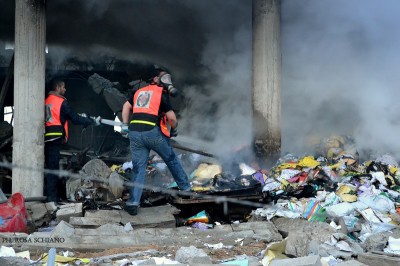 Civil Defense crews work to clear the rubble left by an Israeli airstrike on 31 January. (Photo by Rosa Schiano)

It was a bloody beginning of the new year for the Palestinians of Gaza who, in addition to suffer from more and more difficult socioeconomic conditions, continued to face Israeli military violence.

During the month of January, there have been many attacks in the areas along the separation barrier surrounding the Gaza Strip, several incursions of Israeli military vehicles into Palestinian territory, precision air strikes, and almost constant attacks by the Israeli navy against  fishermen.

The “bloody Fridays,” attacks against the youths of the popular resistance

Recently popular resistance has grown in the Gaza Strip. Every Friday hundreds of young Palestinians gather near the al-Shuhada cemetery, east of Jabaliya, in the northern Gaza Strip. Sometimes they throw stones at Israeli  soldiers and try to place Palestinian flags on the fence that separates the Gaza Strip from the land occupied by Israel in 1948. Israeli forces open fire indiscriminately at these unarmed young people, sometimes injuring or killing them. In January, two young Palestinians, included a child, were killed during the popular demonstrations. And at least 14 young Palestinians were wounded by gunfire in the course of these events. In the majority of cases, injuries to their lower limbs were reported.

On 2 January, Adnan Jamil Shehda Abu Khater, age 17, went to the al-Shuhada cemetery with some friends after school. The youths were about 500 meters from the fence. Israeli forces opened fire and Abu Khater was wounded by a bullet in the pelvic area. He died the following day. 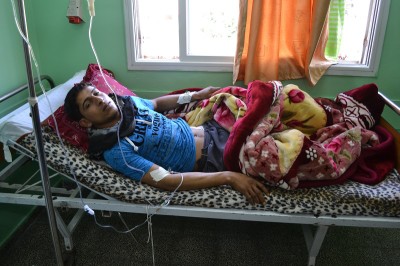 On 3 January, in the same area, Israeli forces opened fire at a group of youths about 200 meters from the fence. Khaled Ibrahim Ouda, age 21, was injured by a bullet in the right leg. The same day, Thaer Mohammed Rab’a, age 25, was injured by a bullet in his left side while he was 300 meters from the fence. “They were competing in getting closer to the fence,” one of Thaer’s relatives said. 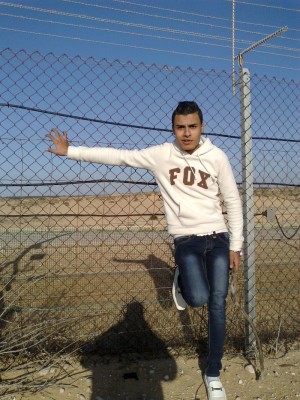 Belal Samir Ahmed ‘Aweidah, shortly before he was shot and killed by an Israeli military sniper. (Photo by Akram ‘Aweidah)

In the same day, a group of young Palestinians was gathering in an area north of Beit Lahia. They approached the border and throw some stones at the soldiers. Belal Samir Ahmed ‘Aweidah, age 19, from Beit Lahia, was killed instantly with a bullet to his chest. His mother described how her son was killed.

“We had lunch,” she said. “It was our last lunch. Then he dressed. I asked him: ‘Where are you going?’ ‘I will do a tour with some friends’, he said.”

Belal, along with other youths, was spending Friday afternoon taking photos near the fence and “looking at our occupied lands on the other side of the barrier,” his cousin Akram said. A sniper fired a bullet into his chest.

Akram showed us photos he had taken of Belal before he was killed.

On 31 January, the last Friday of the month, about six youths were injured close to the cemetery east of Jabalyia. Two of the wounded were hospitalized at Kamal Odwan hospital in Beit Lahia. Moaz Al Tlalqa, age 21, was wounded in the right thigh. The bullet caused a comminuted fracture.

“We want the end of the siege and we want to live like the other people in the rest of the world,” he said later. The second injured Palestinian, Mahmoud Muharram, age 24, had tried to reach the body of another wounded young man who was lying 20 meters from the fence. The soldiers told him to go away and to leave the body of the young man. Mahmoud refused. A soldier fired a bullet at his left leg.

“The soldiers took the Palestinian flag that we placed on the fence and stepped on it,” Mahoud said. Then he added: “This land was wet with blood more than water.”

In the courtyard of the hospital, several youths present Friday at the demonstration, included a young man injured the previous week, had gathered.

“Next Friday, I’m going to place the Palestinian flag over the fence,” one of them said.

“Whatever is written in the sky, we will face it,” the young man replied.

In January, the Israeli air force carried out two attacks on agricultural and empty lands. Three attacks targeted Palestinian resistance sites. In one, a three-year-old child was injured by shards from the broken window of her house in Nuseirat. Two UNRWA schools and more than 20 houses were damaged in the same attack.

On 9 January, an Israeli warplane fired a missile at a motorcycle rickshaw, or “tuk-tuk,” driven by two members of the military resistance east of Khan Younis. The two men were wounded and windows of the adjacent houses were damaged. A three-year-old child, Heba Abdullah al-Ghalban, was injured by shards of glass.

On 19 January, an Israeli drone fired a missile at a motorcycle driven by an activist of the al-Quds Brigades, the armed wing of the Palestinian Islamic Jihad movement, in al-Saftawi street in the town of Jabaliya. The activist was seriously injured and a an eleven-year-old child was injured by shrapnel.

On 22 January, in another extrajudicial execution attempt, an Israeli drone fired a missile at  a civilian car in Beit Hanoun, in the northern Gaza Strip. Both passengers, Ahmed Mohamed Khalil al-Za’anin, age 21, a member of the resistance, and his cousin Mohammed Yousif Ahmed al-Za’anin, age 22, were killed. 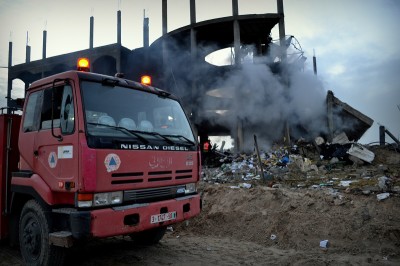 On 31 January, at about 2:40 am, Israeli warplanes carried out airstrikes in Rafah Safena, north of Gaza City, and on a building near Sheikh Zayed, in the north of Gaza Strip. In the latter case, many animals bred in the bombed structure were killed. During the same period, Palestinian armed resistance groups have launched several rockets toward Israeli territory, and the Israeli Defense minister threatened a new military offensive if the Palestinian government in Gaza does not prevent the launch of rockets.

In January, the Israeli navy carried out at least 13 attacks against Palestinian fishermen during which fishermen were forced to leave their work. All the attacks occurred within three nautical miles, except for one within six nautical miles. Most  of the attacks took place in waters off the northern part of the Gaza Strip.

Three fishermen were captured, included a child. During the detentions, the fishermen were interrogated, asked for their personal information and about places and people in Gaza. Their boats were confiscated.

Israeli military vehicles carried out several incursions and “leveling” operations on  Palestinian agricultural lands. In several cases the army opened fire at farmers and other civilians in Khan Younis and Beit Hanoun, forcing them to leave the area. In one incident, a civilian was wounded in Beit Hanoun 300 meters from the fence.