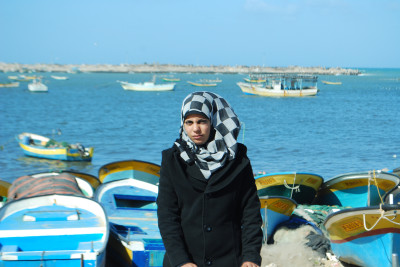 I have seen her standing there more then once, at the edge of the port, looking out over the boats in the harbor and then towards the horizon. And for a short second, I have seen myself, when as a child I took my bicycle down to the harbor just to stand at the pier and gaze, for a long, long time,  at the boats that disappeared beyond the horizon, and wonder what was beyond that line. And I have briefly asked myself if she does the same. But she is not a child, she is a young, adult woman. A strong woman.

I asked a good friend to arrange a meeting with Madleen Kolab, 19 years old and Gaza’s only fisherwoman, for an interview. Later, she would reveal this was only to tell me face to face tell me that she does not give interviews. For almost two years,  she has declined all requests from journalists because they, as she says, only writes for their careers. But she decided to make an exception when she recognized me and knew that I was involved in the rebuilding of Gaza’s Ark, and thus in work for Palestine. Her firm look told me that she was serious and I felt honored, but also a little embarrassed, and was grateful that I could lower my eyes towards my notepad.

When she was six years old, she already accompanied her father when he was fishing, and she knew early what her coming profession would be. She loves her work. It gives her a sense of freedom to be on the sea, and she was careful to point out that nobody forced her to become a fisherman. Her rapt answers to my questions, that she never needed any consideration, unwavering eyes and lack of hesitation left no doubt or room for me to think otherwise. I could not doubt her word when she said that the other fishermen respect her as an equal colleague. It was only after I stressed that women all over the world find it difficult to break into an extremely male-dominated industry like fishing that she confessed she too has been fighting for her rights, and has been treated with prejudice, but that has now changed.

Madleen is the eldest of four siblings. She fishes with the younger of her two brothers on a hasaka, a small open boat, with an outboard motor. Earlier she had a type of boat she needed to paddle. Now she has the opportunity to go to deeper water and get somewhat better catches. Besides, it is safer. But she has been attacked by Israeli patrol boats, and she says it has been common for bullets to whiz around the boat. Once she feared she would be arrested, but when the Israeli soldiers discovered there was a woman on board the boat, they ordered her to instead head back to the harbor, obviously unsure of how they would deal with the unfamiliar situation. Madleen knows that will not save her forever, and she avoids the edge of the group of boats that go out, preferring to fight over the catch with others than try to get a bigger share for herself in more open water. But she also knows that when the Israeli military has decided to take a particular boat, it will also be the one they separate from the others. 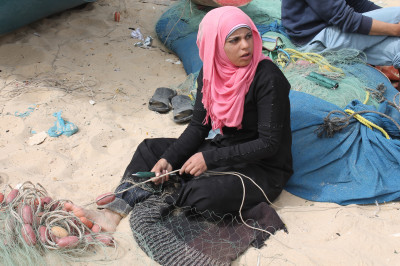 I asked her about the escalation of violence. In January, thirteen attacks on fishermen were carried out, one at the six nautical-mile limit and the others three or less than three nautical miles from the coast. She knows from experience that if it is allowed to go out six miles, the Israeli navy keeps them within five miles, and when they were officially allowed to go only three miles, it was in reality only two. But Madleen believes they now attack so close to land because it is a high season and Israel wants to make it difficult for Palestinian fishermen to support themselves. This view is consistent with those of fishermen I have talked to after they were temporarily arrested and had their boats and gear confiscated. And the Israeli military know they can continue their abuses, since the world is not protesting.

But what would she do if there was no blockade? Would she leave Gaza? Madleen did not hesitate. She would stay. Palestine is her home. But she would fish further out, away from the overfished and shallow waters. And she wish that global society could make Israel stop the illegal and inhumane blockade. Fishermen themselves cannot. And as Madleen rightly points out, they have the right to fish in their own water. Right now, everything is like a dark dream, she continues; the future seems bleak. Still she hopes that one day they will be free from the blockade. And to hope is the only thing they can do.

Her phone rang. Someone wondered where she was. Madleen had never meant to be away for any length of time, and she asked me if I had any more questions. I took a few photographs of her and thanked her for her time. Before she left, she offered her help to launch Gaza’s Ark back into water. But I think I will see her again, standing there at the edge of the port. And it strikes me that I never asked that question, what she thinks about when she gazes towards the horizon.