Clashes between Israeli forces and Palestinian youth erupted yesterday after settlers attacked villagers from Qusra on their fields. Palestinians captured a group of settlers on their way to Qaryut after they had destroyed a number of olive trees.

In the morning of the 7th January 2014, several farmers from Qusra, a village south of Nablus, entered their fields close to the illegal outpost of Ashe Kodesh. At approximately 10am two illegal settlers, accompanied by three Israeli soldiers, entered the fields in order to destroy the olive trees. Palestinians witnessed one settler carrying a metal stick which he then used to beat a farmer, while the soldiers watched on refusing to intervene. The farmer received injures to his head and to his knee.

Villagers from Qusra heard of the attack and went to the fields to assist the farmers. While the farmers brought the injured man to the ambulance, clashes erupted between Israeli forces and Palestinian youth. Many Israeli soldiers and border police shot tear gas canisters at the protesters and moved to protect the illegal settlers. More settlers arrived at the fields in order to watch the clashes, while Israeli forces were extremely violently and shot tear gas canisters directly at Palestinian youth and journalists.

After approximately one hour the settlers ran towards the village of Qaryut, destroying more olive trees on the way, closely followed by Palestinian and international activists. The villagers of Jalud heard about the settler attack and witnessed them running in the fields. The villagers decided to surround the settlers and hold them accountable for the attack. The Palestinians beat the settlers and brought one by one to a shelter between Jalud and Qaryut, where they controlled their movement and stopped them from running away. After they succeeded catching several settlers, the others hid behind trees and stones close by. Four Israeli soldiers arrived at the shelter and were overwhelmed with the situation.

After approximately 30 minutes many journalists and members of the press arrived to document the incident. The injured settlers refused help from the Palestinian Red Crescent. After a short period of time, the Palestinian DCO arrived and handed over 17 settlers to the Israeli army, which by then had increased to around 40 soldiers. Further information about the settlers is unknown.

Qusra is a Palestinian village in Nablus, of approximately 4,500 people, that is hundreds if not thousands of years old. The village is no stranger to settler violence and harassment. The most infamous incidents of settler violence in Qusra occurred in September 2011, when a mosque in Qusra was vandalized and targeted for arson by extremist Israeli settlers, gaining international attention. Later the same month, a group of settlers invaded the village and when they met resistance, Israeli soldiers intervened, shooting and killing Essam Badran, a 35-year-old Palestinian man. 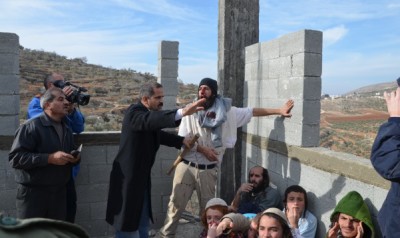