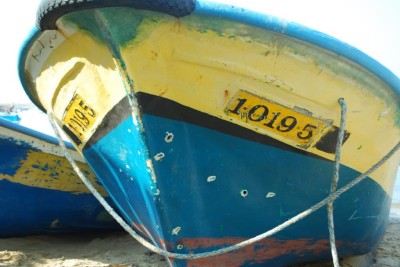 On Saturday, 4th January, the Israeli navby shot at five fishermen and their boat, a hasaka,  three nautical miles from the shore of Gaza, well within the highly-restricted part of Palestine waters in which the occupation forces officially allow them to fish. Despite damage to the boat, and water that flooded it, Majed Baker, age 55, and his four relatives managed to return to port and get the boat onto shore. A total of nine bullet holes were counted, some below the waterline.

Previously, according to the Palestinian Ministry of Information in Gaza, the Israeli military had restricted waters in the north. It thereby expanded the nautical “buffer zone” by Israeli waters through military force, and without declaring its intentions in advance. Nor has it made any statement in retrospect. The restriction of the fishing waters in the north is confirmed by the affected fishermen. The same pattern can be discerned in the rest of the increasingly narrowed zone. According to Zakaria Baker, coordinator of the Union of Agricultural Workers Committees (UAWC)’s fishermen’s committee, all boats that tried to sail further than four miles from the coast have been attacked since the beginning of the year, and the “buffer zone” in the south, by Egyptian waters, has been curtailed drastically. This means boats in Rafah must sail north along the coast for some distance before they can venture into fishing grounds.

These restrictions affect the fishing industry severely, especially now, during the peak season. As a result of Israeli aggression, the total catch has fallen by 42% since 2000, and the number of registered fishermen has declined from about 5,000 in the 1980s to less than 3,000 today, according to the United Nations’ Office for the Coordination of Humanitarian Affairs. Attacks and shootings against Palestinian fishermen, sometimes resulting in fatal and other injuries, arrests and seizures of boats, and destruction of fishing gear, are common and documented by the Palestinian Center for Human Rights. Since neither the Palestinian fishing industry nor fishermen themselves endanger the State of Israel, these abuses cannot be understood as anything other than collective punishment, which violates the fourth Geneva Convention, Article 33.

Behind all the numbers and statistics lurk people. When an occupying power, in this case Israel, is allowed to continue to violate international conventions by the world community, it allows other nations to do the same. This erosion of established conventions is a threat to the people they are meant to protect, and can eventually affect relations between states. The attack on the five fishermen is therefore a concern for the entire international community, and not an internal matter between Israel and those living under its occupation.