Illegal settlers burn two cars in the village of Madama

Today, the 8th January 2014, at approximately 3am settlers entered the Palestinian village of Madama, south of Nablus and set fire to two cars. The cars were parked in the village center beside the home of the car owners.

A villager from Madama and owner of one car, Dr. Rami Nassar, heard noises outside his home, when he went out outside he witnessed the settlers setting fire to the two cars. The four illegal settlers left the area as soon as they started the fire. Dr Nassar saw them leave in a blue car with an Israeli plate driving away towards the main road.

Other Palestinians arrived at the scene to help put out the fire on the cars. In the morning other villagers discovered graffiti in Hebrew on a wall close to the parking area where the cars stand. It says ‘revenge – Ashe Kodesh’.

Just yesterday Palestinians from the villages Qusra, Jalud and Qaryut defended themselves against attacking settlers. The settlers were beaten and held until the Palestinian DCO handed them over to the Israeli army. The villagers of Madama believe that it was revenge action from a group of angry settlers.

Madama is a village of about 644 hectares and a population of 2500 people. Madama is located next to the illegal settlement of Yizhar, and had been the frequent target of attacks by the settlement, including cutting down hundreds of trees and beating farmers. Settlers have fired upon villagers and, since 2011, three people have been killed. As is common throughout the West Bank, the settlement has seized lands from nearby villages, up to 100 hectares, and continues to do so. One of the most horrific events arising recently from the village of Madama is that of the Nasser family, who are being forced off their land due to their close location to Yizhar. 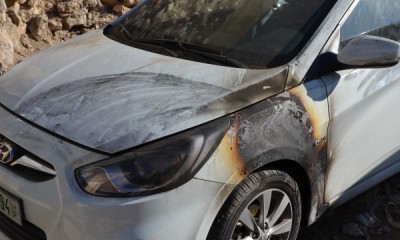 One of the burnt cars (photo by ISM). 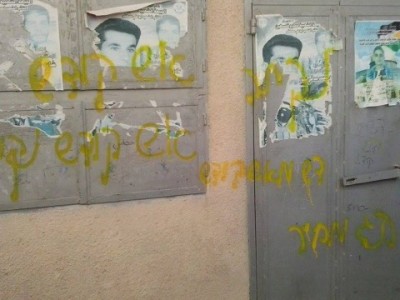 The settler graffiti (photo by ISM).