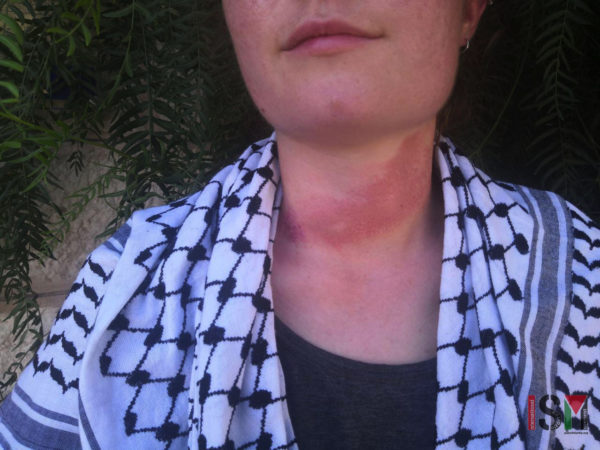 Two Palestinian families lost their homes yesterday in unprecedented mass demolitions in East Jerusalem carried out by 900 Israeli soldiers who hospitalized Palestinians and ISMers in a sadistic and brutal eviction operation.

During the invasion of the two occupied buildings Israeli border police shot Palestinians at close range with rubber-coated steel bullets and kicked them down flights of stairs. ISMers were stamped on, dragged across the floor by the hair, strangled with a scarf and pepper sprayed by Israeli border police.

The International Solidarity Movement activists, Bethany Rielly, 25, Beatrice-Lily Richardson, 27, Chris Lorigan, 30, and Gabriella Jones, 20, were carrying out a non-violent action by sitting in the house of Palestinian Ismail Obeide with 30 locals in the Wadi al-Hummus neighbourhood of Sur Baher, in an attempt to delay the demolition.

12 Palestinians were also hospitalized after being kicked in the back down flights of stairs and two were illegally shot at close range with rubber-coated steel bullets.

At around 3am yesterday morning 900 hundred Israeli soldiers were bussed to the area with trucks of demolition equipment to bulldoze three Palestinian apartment blocks, including an unfinished block which they spent 15 hours rigging with dynamite.

At around 5am they smashed down the door of Mr Obeide’s house. He was standing in the doorway holding his hands out in disbelief when dozens of soldiers invaded his home immediately pepper spraying him in the face.

They used excessive force, seemingly with enjoyment, whilst firing tear gas into the enclosed space and brutalising Palestinians and international activists.

The four British nationals were sitting in a small unventilated bathroom with the door closed when a soldier opened the door and threw in a tear gas canister.

Chris said: “When the soldiers found us in the bathroom, they threw multiple tear gas canisters and shut the door. As we started to suffocate in the smallest room in the house, soldiers burst in and dragged us violently, pulling at every possible part, regardless of safety or policy.

“I was dragged by my feet and lifted up, kicked in the stomach, then one soldier in particular stamped on my head four times, at full force, then standing on my head and pulling at my hair, he then stamped on my throat and others started punching my torso. It was a sadistic display of violence by the border police.”

After he told the soldiers he would leave, they continued to beat him, throwing him through a table. At one point they also tried to pull his trousers off. He suffered a fractured rib, and severe bruising to his chest, legs and face. 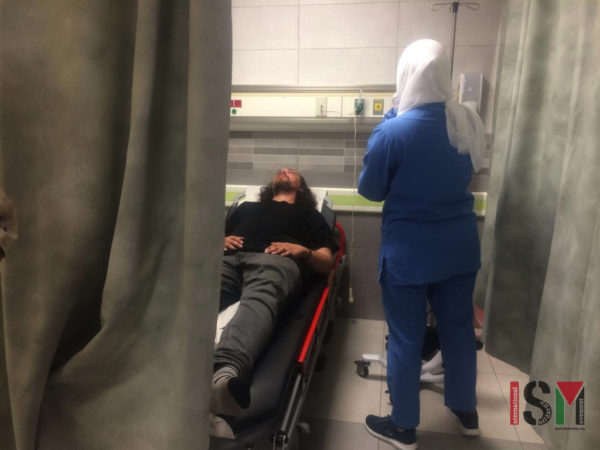 ISMer in hospital being treated for a fractured rib 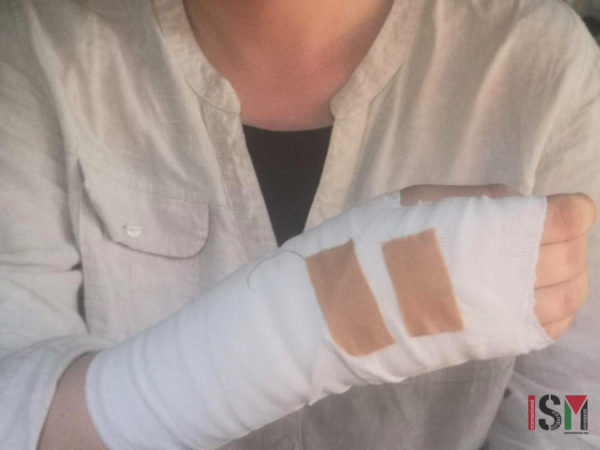 Beatrice was also dragged out and her hands crushed so badly that she suffered severe tissue damage to her right hand which will be permanently misshapen unless she gets cosmetic surgery and a fractured knuckle on her left hand. She was bruises across her arms, hips and inner thighs.

Gaby was severely pepper sprayed in the face and hands and soldiers ripped her shirt revealing her bra, leaving large bruises on her right arm.
Bethany was dragged by her Keffiyeh around her neck out of the bathroom. Soldiers then pulled her out of the room by her hair. She said: “A soldier dragged me by my keffiyeh across the floor strangling me until I screamed when he then crushed my neck under his knee. I couldn’t believe the pure aggression they were using against us. I was in such a state of shock the whole time that I couldn’t open my eyes. As they dragged me by my hair as I choked from being strangled and the tear gas I heard them laughing at me. We were unarmed civilians using peaceful means to try and delay them destroying Ismail and his family’s home that they worked so hard to build. Hundreds of soldiers were bussed in to do this. Is a house demolition a military operation anywhere else in the world? This is the reality of life for Palestinians living under Israeli occupation.” 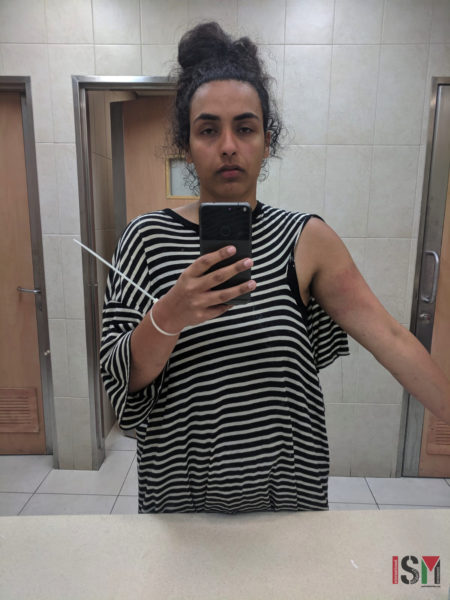 The four activists were all admitted to Makassed Hospital in East Jerusalem where they were treated for their injuries.

Three international activists, from Britain, the US and France were locked in a different room in the same house with around 15 Palestinians. Soldiers threw sound grenades into the room and continued to throw two more even after the Palestinians said they would leave.

A US national who did not want to be named said: “The Palestinian men began saying ‘hallas’, saying they were done, ‘open the door.’ They held hands up and then again, a soldier threw a sound grenade in and closed the door, and then again. And this was after everyone had stopped resisting, but the brutality kept going. Then one by one they very roughly, very aggressively, unnecessarily rough, as these men were holding their arms up in the air, grabbed the men and shoved them out of the door. They grabbed people fingers, it appeared as though they intended to break them. Then we got to the stairs and they were kicking us down the stairs in the lower back and several of the Palestinian boys they kicked so hard that they tumbled down the stairs and this was when there was no resistance at all going on.” A video of the moment when soldiers burst in is shown below (taken by US ISMer).

ISM activists from Britain, Spain and Austria were in another house which was also demolished.

Nine Israeli and international activists were in the house of Ghaleb Abu Hadwan, with his 4 daughters, son and grandfather.

Edmond Sichrovsky, an Austrian activist of Jewish origin, who was in the house said: “Border police broke into the house and dragged out the Palestinians, knocking the grandfather to the floor in front of his crying and screaming grandchildren. Everyone with a cellphone was forcibly removed from the house. Once there was no one filming present, they attacked me and 4 other activists. I was repeatedly kicked and kneed, which left a bloody nose and multiple cuts, as well breaking my glasses from a knee in the face. Once outside, they slammed me against a car while shouting verbal insults at me and women activists, calling them whores (Sharmuta).” 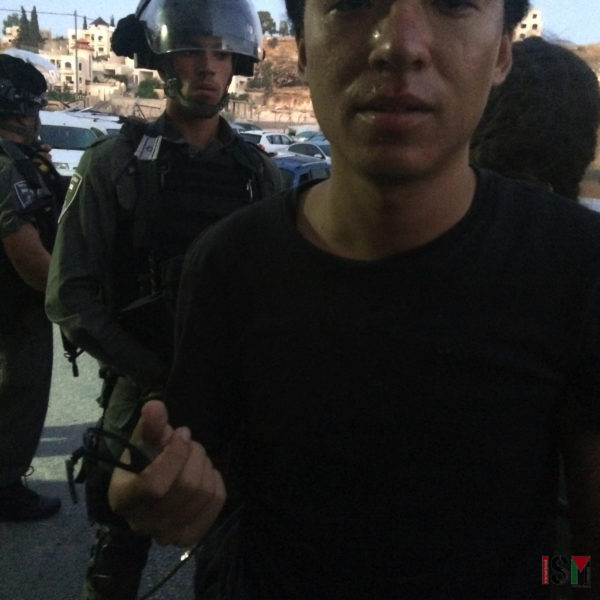 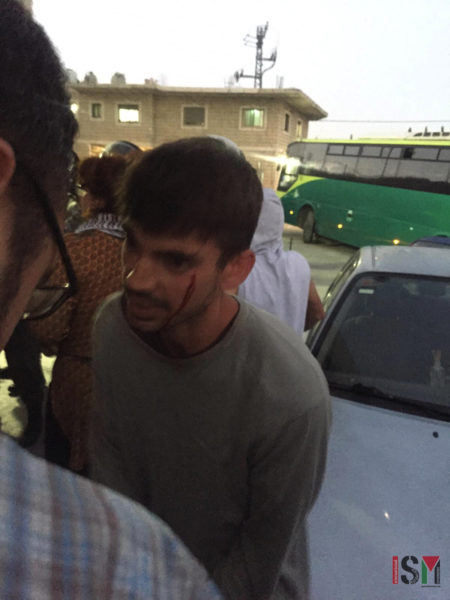 A US activist was kicked in the stomach and Spanish activist Ivan Rivera was hit in the head with the but of a gun.

Yesterday’s demolition of Wadi al-Hummus has made national news but due to the lack of media presence inside the family homes the extent of the violence and sadism perpetrated by IOF on Palestinian citizens and international activists has remained largely unreported. ISM activists are sharing their personal accounts of yesterday morning’s events including being brutally beaten, tear gassed, pepper sprayed, strangled and laughed at in the process of non violent resistance even after compliance, but urge the international community to recognise the fact that the treatment of Palestinians is incomparable.

After everyone was evicted from the two occupied buildings, Israeli forces proceeded to destroy them while continuing to put dynamite on every floor of the unfinished building. The three buidlings, which are in Area A under full Palestinians Authority control, were destroyed yesterday for ‘security reasons’ using an Israeli 2011 military order that states any house within 250m of the apartheid fence could be demolished. The Wadi al-Hummus neighbourhood is on both sides of the fence, which is illegal under international law. 17 people including Mr Obedi, his wife and their six children are now homeless (a video of the demolition of their home is shown below) as well as the family of Mr Hadwan. And the 350 people who were to live in the unfinished block now have lost their future homes. A video was posted of Israeli soldiers laughing and cheering as the unfinished block was demolished by thousands of explosives. Evidence of the ongoing ethnic cleansing of Palestine is more apparent than ever in efforts like the destruction of these three blocks in Wadi al-Hummus, and hundreds more demolition orders, by the Israeli government. 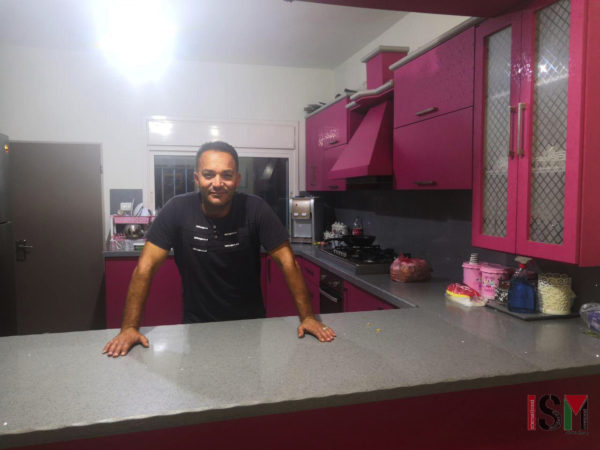