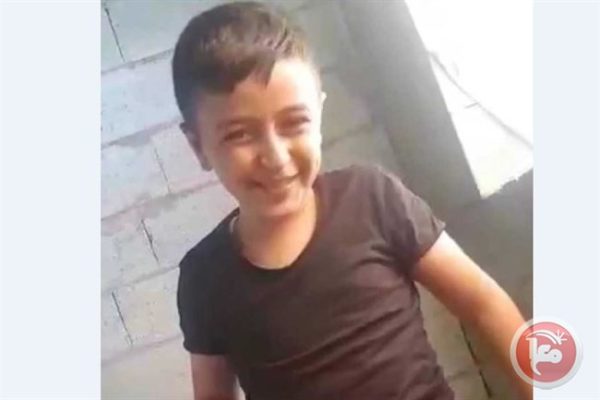 An Israeli human rights group has proved that live fire was used by soldiers against the 9-year-old child who was shot in the head last Friday in Kafr Qaddum, exposing Israeli Military lies that none was used.

The report by B’Tselem, published yesterday, says that Abdul Rahman Shteiwi was shot with live ammunition during a protest in the West Bank town on July 12 “while sitting at the entrance of one of the homes on the edge of the village playing with a piece of wood.”

It reads: “Now hospitalised in critical condition, he is the latest victim of the reckless open-fire policy that allows soldiers to use live fire even when neither they nor anyone else is in any danger.”

Many people turned out for the weekly protest in Kafr Qaddum today, which has been held every Friday for the past 8 years, to call for justice for Abdul who is fighting for his life in Sheba Hospital near Tel Aviv. 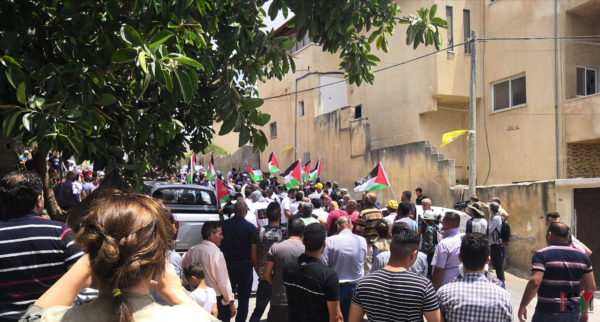 At the demonstration, which was attended by leaders of the PLO, international observers and local and international media, Israeli soldiers bombarded protesters with rubber-coated steel bullets and tear gas canisters.

Paramedics from the Red Crescent told ISM that 40 protesters were treated for various injuries, 22 for rubber-coated steel bullet wounds and 18 for tear gas inhalation. 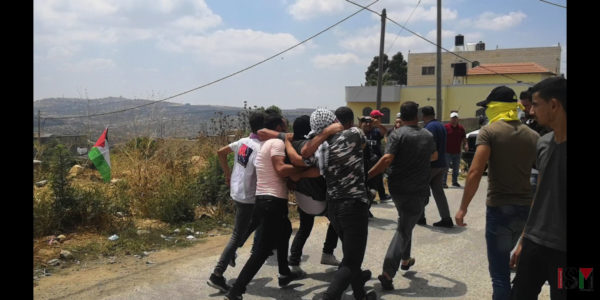 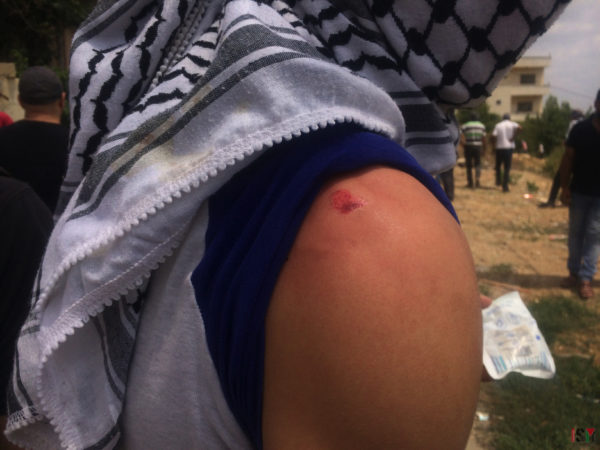 Ahead of today’s protest, a number of Palestinian politicians including PLO minister Walid Assaf declared that they will bring the case to the International Criminal Court (ICC). “The blood of our children is not cheap!” he said. “We will follow Netanyahu and the Israeli war minister in the ICC.”

The Israeli Military still insists that no live ammunition was used last week, despite the mounds of evidence stacking up against their hollow claims.

Kafr Qaddum resident, Riyad Shtaiwi, was sitting under an olive tree with his two children when he witnessed the shooting of Abdul last Friday.

He told ISM through an interpreter that he saw soldiers at the top of the mountain, “taking the position of sniping by lying on the ground,” just before Abdul was hit.

“When I saw the soldiers on the top of a mountain aiming and taking the position of sniping and shooting by lying himself on the ground towards us, I feel real danger,” he said. “I decided to move away from this place and to speak with the child who was opposite me, to take him away from this danger. Before I reach the child, one of the soldiers, the one who was taking the position of shooting, he shot one live ammunition. At this moment I look around myself at my children and then I saw the child on the ground and the blood.”

Mr Shtaiwi ran towards Abdul to pick him up. While he carried the unconscious boy in his arms, soldiers fired 3 or 4 more rounds of live bullets towards them which hit a metal gate just behind.

B’Tselem claims that Abdul’s severe injury is the “direct result of the open-fire policy implemented by the military in the Occupied Territories.”

“This policy illegally and without any justification permits the use of live fire against Palestinians who are not endangering anyone,” the report continues. “The policy remains in force despite the fact that it has resulted in hundreds of Palestinian deaths and thousands of injuries.”

This was not the first time the military has fired live ammunition at protesters in Kafr Qaddum in an attempt to suppress the popular struggle of the town’s residents. In January alone, five protesters were hit with live bullets including a child in the neck who was in a critical condition.

For eight years, the residents have protested against the closure of the town’s main road to Nablus by the military in the early 2000s. The blocked road is now exclusively used by illegal settlers, forcing Palestinians to take the longer road which has impacted their economy.