The events of Tuesday the 18th of October began to unravel as my friend and I accompanied school children through an Israeli checkpoint (Salaymeh) as they made their way home that afternoon. On our return journey from the school we noticed a car stopped next to a number of school children, its passengers yelling loudly at them, prompting us to film the confrontation. When the driver became aware of our filming the car began to move slowly towards us. As it neared, the car accelerated slightly, forcing us to move quickly to avoid it. Some of the passengers immediately jumped from the car and began to hurl insults at us, calling us “Nazis” and “Jew killers”. They continued in this fashion, pushing and shouting at us to “leave their land” until we were forced through the checkpoint to relative safety. The soldiers present did little to stifle their aggression towards us and even offered one of these men a friendly pat on the back as we left.

After passing through the checkpoint we noticed an armored bulldozer parked outside the gate and so we decided to wait a while. Before long the checkpoint gate opened and the bulldozer began to move through the street towards another checkpoint (Qeitun), accompanied by three armed Israeli soldiers. We followed it to Qeitun where it began to fashion a roadblock from rubble, large stone blocks and rubbish that was piled up in the street. As we got closer the soldiers began shouting aggressively at us to stop, preventing us from properly observing what they were doing. In the commotion a number of people came out from their homes and businesses, and children, whose homeward journey was blocked due to the soldiers activity, began to congregate at a nearby junction. With this, the soldiers began pointing their weapons threateningly into the crowd. One soldier regularly lifted a stun grenade from his jacket pocket, seemingly eager to use it. As the bulldozer returned to Salaymeh, soldiers continued to fixate their rifles on young children and people passing by. One soldier aimed his rifle at children moving through a near by field, laughing out loud as they ran, terrified that he might fire at them. As the bulldozer passed through Salaymeh, a single stone was thrown from the crowd of school children who had congregated at that junction, landing harmlessly on the ground at the soldier’s feet. In response, the soldier ran towards the congregated school children, throwing a stun grenade into the middle of the crowd causing it to scatter in a frenzied panic. Again he laughed at this triumph. 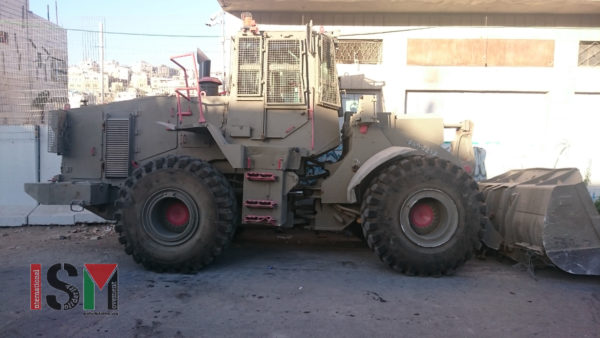 An armored bulldozer rolls out of the Salaymeh checkpoint through the Palestinian neighborhood to create a roadblock off of a narrow side street. 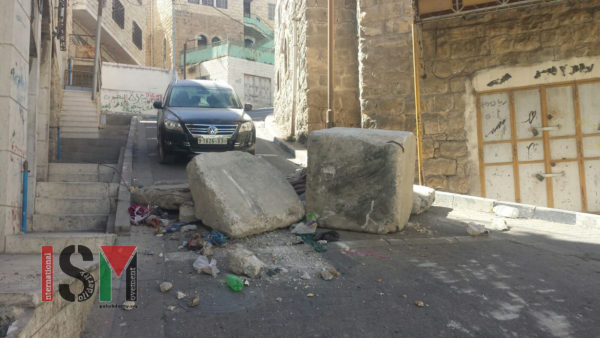 Roadblock built from large stones and rotting garbage blocking off a Palestinian side street near the Qeitun checkpoint.

It was clear that these children, ranging in age between 5-15, posed no real threat to these soldiers and most were simply waiting to go home. Many of the adults among them, some of whom were presumably teachers, tried tirelessly to keep the children out of harms way. Despite this the soldiers enjoyed taunting the crowd and frightening them with violent intimidation and excessive use of force.

To the Palestinian residents of Hebron such incidents are a familiar occurrence, but these operations increase in regularity during the Jewish holiday of Sukkot, which draws hundreds of Jewish holidaymakers to the fully Israeli controlled H2 part of the city to celebrate the “Feast of the Tabernacles”. Under the auspice of “security”, Israeli military presence similarly escalates during this period, as the number of roadblocks, closures and checkpoints increases dramatically.  A number of Palestinian-owned businesses are even forced to close during this time and many residents are prevented from entering or leaving their homes as Jewish tourists parade freely through the so-called Palestinian controlled H1 part of the city, accompanied by soldiers armed heavily with rifles and a variety of other weaponry. Armed guards frequently humiliate and harass Palestinian residents, young and old, with an upsurge in the frequency and ferocity of body searches. Barricades are erected to separate passing Palestinians from Jewish tourists, further reinforcing the apartheid system already enforced by the illegal Israeli occupation of Hebron.

An atmosphere of trepidation consumes the Palestinian residents of Hebron during Sukkot for fear that this military escalation will be used to further the Israeli agenda of “ethnic cleansing” of Palestinians from the city. Violence, eviction and destruction of property at the hands of settlers and the Israeli forces has become commonplace for the Palestinian population of Hebron who, despite it all, remain admirably resolute and resilient throughout. 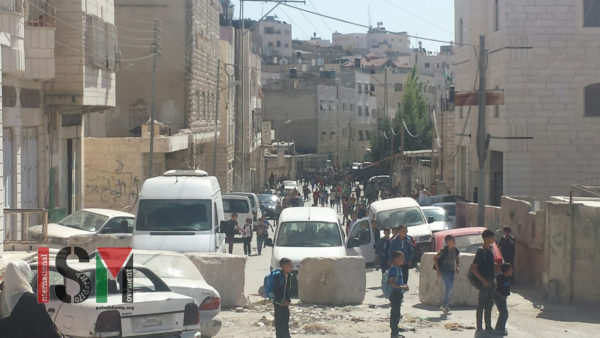 School children prevented from returning home due to this activity by the Israeli forces.