Olive harvest next to the illegal settlements in Bruqin

On October 21st, an ISM-team joined farmers in the village of Bruqin, Salfit district, for the olive harvest. The family’s fields are occupied by an illegal Israeli settlement and they are denied access to their land by the Israeli military except during the olive harvest.

A team of solidarity activists went to meet the farmers and set out to the olive fields together. The crop this year was very small as the access restriction prevents the farmers from caring for their trees during the year. The wild condition of the field made the harvest more difficult and less fruitful. Neither settlers nor military appeared during the harvest day.

In 1999, the illegal Israeli settlement Burchin was established near the village of Bruqin. The establishment of this illegal settlement led to local farmers being denied access to land which has belonged to their families for generations. In 2011, the settlement structure was expanded by several baracks, confiscating even more land. The illegal settlers have repeatedly harrassed the local farmers verbally, phyiscally and by also cutting down olive trees in their fields. Moreover, the local farmers are harrassed by the Israeli military every year, trying to deny them access to their land even on the day of the harvest. On one of the local family’s fields, the access restriction and harressment by settlers and military has led to a huge decrease in gain from the harvest from formerly 1000 kg of olives per season to now 30 kg of olives per season.

Apart from the harrassment and land restrictions, the nearby illegal industrial settlement Barkan streams its toxic waste water down into the village of Bruqin. This poses also an environmental threat to the olive harvest and the peoples’ health in the village in general. 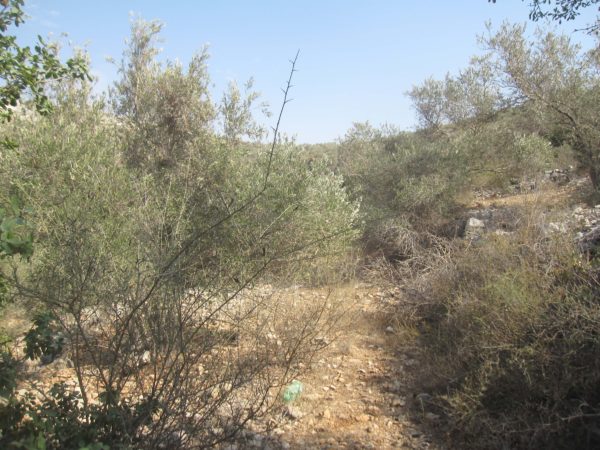