Deir Istyia, in Salfit district, is a village of 4000 inhabitants who mostly live on agriculture. The Salfit district has 19 villages and 24 settlements. Land confiscation is ongoing in the area and many of the settlements are growing, as the road that connects them is widening. 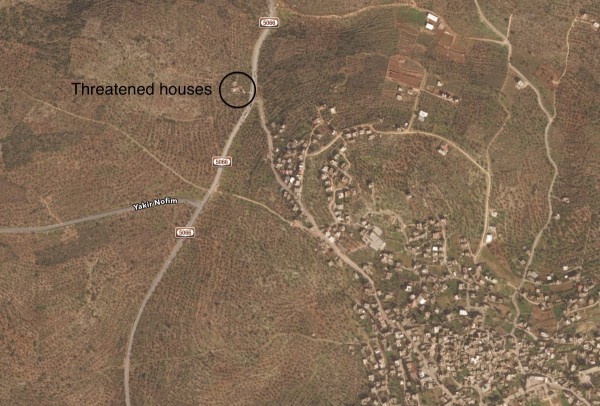 The 3 families are now the only Palestinians living on the west side of the road.

Now three families, living in the outskirts of Deir Istyia (see photo), are under daily threats and harassment from the Israeli forces. They don’t know if the goal is to take over their land or just to try to make their lives so unbearable that they will themselves decide to move from the land on which they have been living peacefully for many generations.

It started in the beginning of october this year, where the soldiers started to come to the houses and harass the families, mainly at daytime. Often the women are alone with the children during the day while the men are working. Israeli forces have chosen this time to come to the houses and scare the families.  One of the women explained to us that the soldiers hit her, told her that the house wasn’t hers and that she soon would have to move away. They also told her that she was a terrorist, and that the soldiers would soon come back and shoot her.

Over the last 4 days the Israeli forces have been there day and night, telling the families that they have permission to stay on the roof of one of the houses. One night, they stayed all night and slept on the roof. They claim to have to watch the road and the surroundings, because of stone throwers, even though there hasn’t been any stone throwing in that area. Last Saturday, when the soldiers were there, they took pictures of the house and the yard.

Now, the children are very insecure, and their mothers don’t leave the houses as they are afraid of leaving them alone, a situation that makes them feel, as they describe it, as in prison. They can hear the soldiers walking around outside their houses and standing on the olive hill behind them at night.

Volunteers from International Solidarity Movement and International Women’s Peace Service will follow up on the situation of these families.