Hamze Marwan Abdomousa is asking for your support!

So far, supporters have donated 105 dollars – thank you so much. However, we still need 918 dollars to pay his fine to release him. Please, keep donating – every contribution matters!

The International Solidarity Movement has received a call to support a political prisoner. His name is Hamze Marwan Abdomousa, and he is 22 years old. Here is his story:

On the 5th of February, 2015, Hamze was arrested by the Israeli army in his home in the Amari refugee camp, Ramallah. The military court accused him of throwing stones and of trading military equipment, and even though he refused these claims, he had to accept this accusation according to his lawyer’s plea bargain in order to get a 1 year sentence – instead of a sentence that could last three years or even longer. 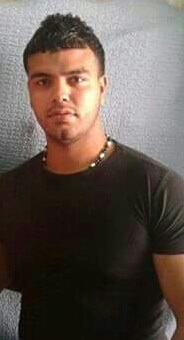 But despite the fact that Hamze obtained this 1 year sentence, the court also ruled he must pay a fine of 4.000 shekels (or USD $1.023) before the end of December, in order to be freed by January 2016. This, in turn, has caused further distress on his family, not only because they are very poor, but because if he does not pay the fine, the Israeli army will keep him in prison for another 4 months.

‘This fine goes beyond the financial means of my circle of family and friends,’ Hamze explains. ‘My financial situation is very difficult, and has worsened by the fact that I have been unemployed for the past 2 years. I was forced to leave school at grade 9 to begin working and help my family. My family still depends on me for financial support, and my imprisonment has exerted an enormous burden on them. I ask all people who understand me to support me and my family.’

Hamze further says all he wants is to continue a life with dignity and build a family of his own.

The ISM is calling the international community to see Hamze’s situation and support him with donations. If you can’t make a donation, please share his story with your friends and family, in your social media and with all the people who care!

If you want to make a donation, please do so here, and write us an e-mail to palreports@gmail.com adding ‘Support Hamze’ in the subject, detailing your name and the amount you donated.

Any amount you donate will be greatly appreciated: if we all put our efforts together we can fulfill Hamze’s desire and right to freedom!