Around 08:00 pm, more than 50 settlers from the illegal settlements within al-Khalil, most of them children and teenagers, accompanied by a few adults, marched around the Palestinian neighbourhood of Tel Rumeida, chanting insults and hate-speech, calling for the death of Arabs. The group was not only chanting racist abuse, but also demonstrated a high level of violence and aggression towards the Palestinian residents of the neighbourhood.

After marching through the streets loudly chanting, they attacked Palestinians right outside a shop, running towards them and beating them, and hurling rocks at Palestinian youth and internationals documenting these violent assaults. Instead of intervening, Israeli forces watched these attacks happen at first just to point their loaded guns at Palestinians that just a few seconds before were standing in a hail of stones, threatening to shoot. Two persons were injured with stones thrown by the settlers, a Palestinian youth in his hand and an international in his chest. In the meantime, the settlers openly picked up more stones and rocks from the ground, attacking families that opened their main gates to find out what the shouting was about. Again, instead of preventing or stopping attacks by the settlers, the army violently pushed Palestinians to move back into their homes, yelling at them. All complaints made by Palestinians against the attacks by the settlers were ignored by the soldiers. But not only the settlers, also the Israeli soldiers violently attacked several Palestinians and beat them.

Many families rushed into their homes upon hearing the yelling, locked their doors and then had to watch the settlers chanting abuse at them from behind their windows – protected only by the metal grids installed in the past due to frequent settler attacks. Soldiers, in the best case, are standing idly by. Last night, they were pointing their guns at children and women watching in fear from the roof of their houses – the one place farthest away from the settlers down on the street; and soldiers were banging on the door of Palestinian family homes, while the group of settlers are aggressively chanting and threatening the familieswhile standing right behind the soldiers. 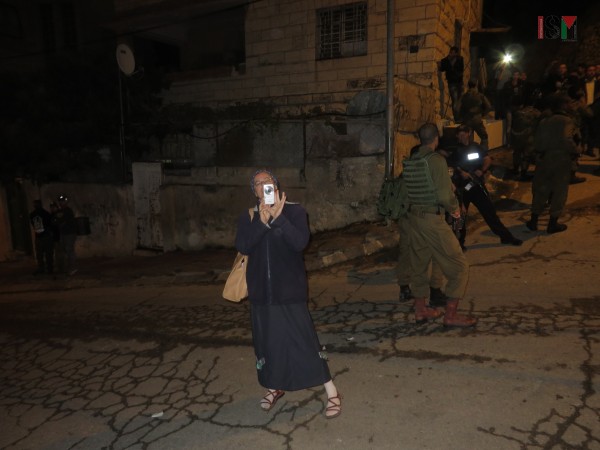 When the march proceeded down the hill towards Shuhada checkpoint, where over two weeks ago the Israeli army ruthlessly gunned down and killed the Palestinian student Hadeel al-Hashlamoun, more than two dozen activists from Youth Against Settlement arrived to document the racist abuse and attacks against Palestinians. Israeli forces that by then finally arrived, immediately stopped the Palestinians and isolated them in an alley, preventing them from going anywhere. The group of settlers on the other hand was allowed to keep on chanting racist abuse and burned Palestinian flags, cheering and clapping. Israeli soldiers were getting their guns ready, facing the Palestinians that were clearly upset when their flags were being burned, but did not do anything to stop the flag-burning.

In order to allow for the greatest possible space for the settlers to move around and keep on chanting, Israeli forces pushed back the Palestinians, with one soldier threatening an international that he would ‘break his face’ if he didn’t move right away. Settler children and women also attempted to break cameras of internationals, blocking them from documenting the events and spit at them.

Infamous, aggressive settler Anat Cohen repeatedly attacked an international observer while she was standing right in front of a police car with two policemen inside, that did not even bother to get off the car and instead just kept watching from inside. Soldiers did at no point try to prevent Anat Cohen’s attacks and instead ordered the internationals to go back up the hill, which at that point was not safe with settlers still roaming the streets. The settler woman both tried to grab the international observer’s camera and attempt to punch her in the face without soldiers intervening. When the international observer was ordered by soldiers to move towards the Palestinians detained on the other side of the road, Anat Cohen pushed her as she was passing in front of the police car, and her daughter kicked the her in the stomach. Soldiers still did not intervene and refused to take a complaint about this attack, forcing her and another international to leave.

Last evening, most Palestinian families, did not go to sleep, staying up late scared of what might happen during the night. Unfortunately, this incident in al-Khalil is only a case in point in a long record of settler attacks, that recently have been escalating not only in al-Khalil, but throughout the occupied West Bank.

Watch a video of the events: