As a part of the recent surge in violence, there has been an escalation in random ID checks and detentions across occupied al-Khalil,(Hebron)  In the full Israeli military controlled H-2 section of al-Khalil this afternoon, several young Palestinian men were detained, interrogated and one was beaten during nearly five hours of interrogation.

At the Shuhada Street checkpoint at around 2:oo pm, a 17 year old Palestinian man was put into a small metal box where Israeli forces placed a large stone against the door to trap him inside.  There is very little ventilation in the small space where he was contained and the sweltering afternoon sun only exacerbated the issue. 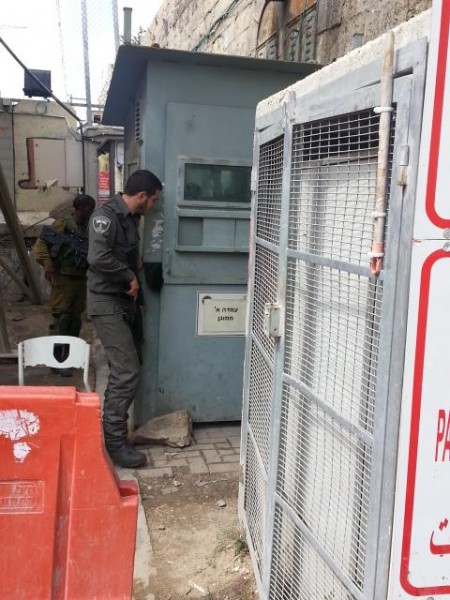 Israeli forces detained a young Palestinian man in a small metal box and trapped him inside by placing a stone against the door.

After approximately 30 minutes, an Israeli military jeep arrived at the checkpoint and half a dozen Israeli soldiers and border police surrounded the box and two went inside, presumably questioning the young man while one studied a laminated poster depicting Israeli forces captured photos of dozens of young Palestinians they wish to arrest before the teenager was finally released. 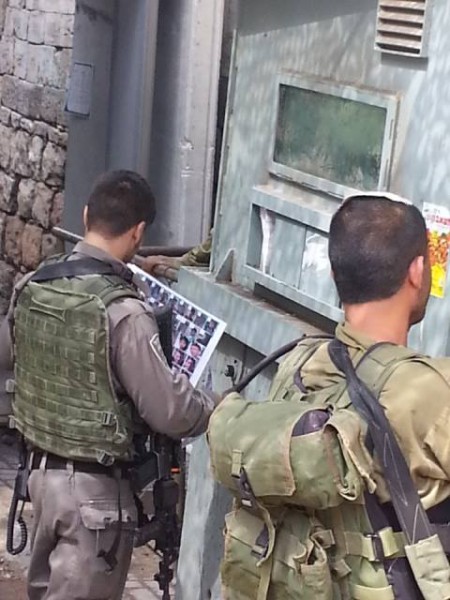 Israeli forces look over a poster of photos of young Palestinians they wish to arrest while detaining young man in metal box.

Detention of Palestinians occurred several times throughout the day.  At around 3pm, also at the Shuhada Street checkpoint, Israeli forces detained, and subsequently marched to the Shuhada Street military base for interrogation, a 19 year old Palestinian man from the Abu Eisheh family.  The young man was given the ambiguous explanation that he was being taken for questioning regarding an issue with settlers.

His father, an advocate for Palestinian’s arrested in H-2 Israeli military controlled al-Khalil, came as close as Shuhada Street segregation allowed to speak to Israeli forces across from the military base about his son’s arrest.  The elder, who is helpful in communications during Israeli military detention of Palestinians due to his fluency in Hebrew, was told by the soldiers that they “knew him” and asked if he “thought he was the boss or the big king of al-Khalil” due to his concerned interventions during criminal detentions.  Israeli forces were heard saying to ignore him because he “is an Arab,” and Israeli police completely disregarded him and international solidarity activists requesting information on the status of his son.

Nearly five hours later, the young man was released and spoke with ISM international human rights monitors about the violent treatment he received during his interrogation, which after five hours ended in his dismissal, another pointless instance of harassment and incursion into the daily lives of the occupied Palestinian people.  “The soldiers blindfolded and handcuffed me during the entire five hours they held me.  They kicked me again and again and hit me in my face.”  Several bruises were visible on the young man who wished only to have his raw and cut wrists photographed. 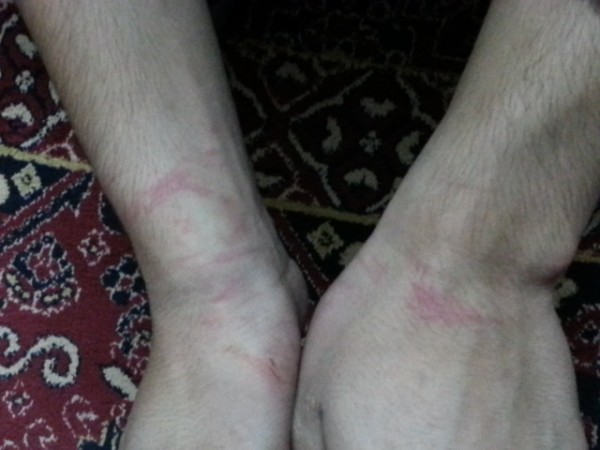 19 year old Palestinian man detained, handcuffed and blindfolded for five hours shows the injuries to his wrists during Israeli military detention in al-Khalil

Violence continues to sweep like wild fire across the occupied Palestinian territories.  Many Palestinians were injured today in demonstrations and confrontations with Israeli forces.