This is what conversations in Gaza consist of: I asked, “When they are shooting, what’s the best thing to do?”

“Get down on the ground,” he answered, “and move away quick as you can.”

It was a stupid question; I knew the answer. I guess I was hoping for a response that would ensure 100% safety for the farmers, and for myself, but of course no such answer exists.

I am not an expert bullet dodger, if such a thing even exists. If you are a farmer here in Gaza, it is a good idea to become one, as the Israeli military is always shooting. Yet how do you actually avoid bullets? The truth is, you cannot. You just hope for the best.

On Saturday, March 28, the Israeli forces shot a lot at the farmers in Khuza’a. No one could know exactly where the shots were coming from; no one knew where they were aiming, or whether anyone would be hit. Thankfully, that day no one was hurt.

The Israeli military jeeps are clear to be seen, but many soldiers were also hiding in the watch towers and shooting from there. Israeli forces fired at least 25 to 30 shots in a span of two hours.

When the first shots were fired, the farmers moved back as much as possible; as soon the shooting stopped, they returned to the lands where they were working. Then you get used to it, and continue. Where in the world do you have to get used to being shot at while farming?

There were three of us: Miguel, Valeria, and myself. It is not enough. In twenty days, full farming season will begin in Gaza, and we will need to go out every morning. The farmers need more than just three internationals to document the violations committed by the Israeli occupation military at the borders.

We were 50 meters away from the border when they shot at us that morning. The Israeli military can clearly see everything that is happening – farming, and nothing more. So why do they still shoot? 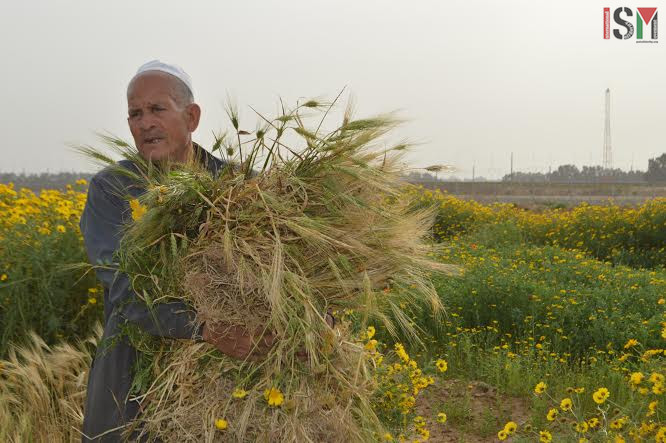 Does the man in this photo look like he is doing anything but farming?

The following morning, the farmers will return.