On the 28th of March 2015, close to 200 protesters from all over the West Bank gathered in Nabi Saleh to protest the occupation in commemoration of Land Day. The protest was met with extreme violence as the Army and Border Police fired large amounts of tear gas and rubber-coated metal bullets as well as several rounds of M16 live ammunition at the protesters.

Video by Anarchists Against the Wall

On March 30th 1976 a general strike and marches were arranged all over Palestinian cities within present-day Israel from the Naqab to the Galilee. The actions were a response to the Israeli Government’s expropriation of thousands of dunums of Palestinian land. During the actions six unarmed Palestinian citizens of Israel were killed, 100 wounded and hundreds more arrested. It was the first time since 1948 that the Palestinians within the borders Israel declared 1948 organised as a Palestinian national collective and the date is commemorated yearly with a series of protest all over Palestine. This year the West Bank village of Nabi Saleh marked Land Day on Saturday, the 28th of March.

Around 12 pm on Saturday, protesters from all over the West Bank, from Hebron to Kafr Qaddum, gathered in the village of Nabi Saleh. The demonstration was a local protest in commemoration of Land Day and of the two villagers Mustafa Tamimi and Rushdi Tamimi, who were murdered by the Israeli occupation soldiers. 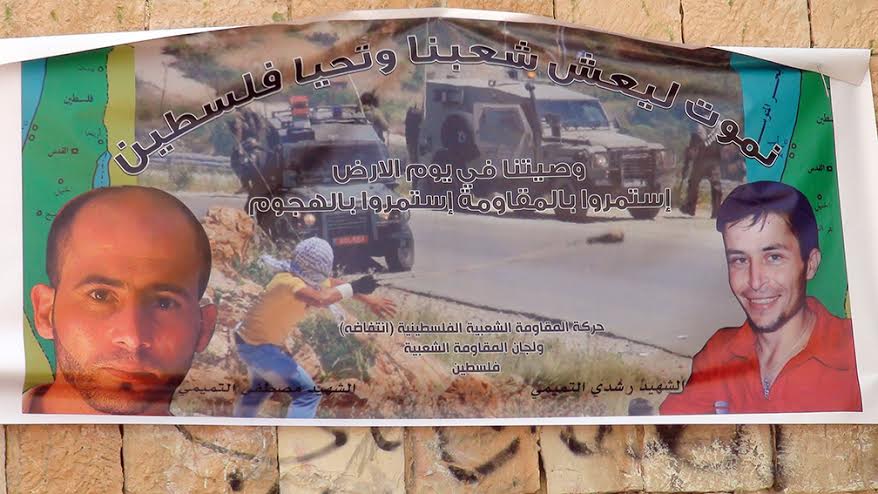 Poster displayed at the rally before the march, showing the two residents of Nabi Saleh who have been killed by Israeli forces since protests in the village began – photo by Tamimi Press https://www.facebook.com/Tamimipresspage

After midday prayer protesters made their way down a main road of Nabi Saleh chanting and singing. On the outskirts of the village nine army and border police jeeps was gathered and as the demonstrators approached the road the about 60 soldiers and police rained tear gas on the unarmed protesters. Several people suffered from severe tear gas inhalation as the military pushed them back into the village. 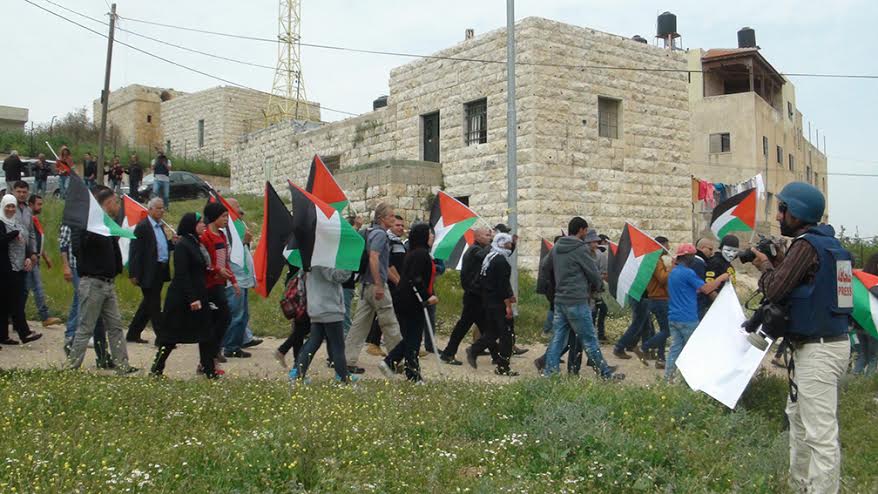 Protesters chanting slogans against the occupation and marching down the road in Nabi Saleh, before the Israeli military opened fire with tear gas – photo by Tamimi Press

Undeterred by the initial choking barrage of tear gas, protesters marched towards the military once again, this time cutting across the farmland and fields outside the village. Many youths remaining on the hillside and threw stones and tear gas back towards the military. 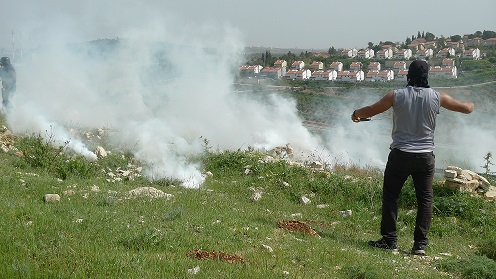 Palestinian youth standing behind a wall of tear gas in Nabi Saleh. The illegal Israeli settlement of Hallamish is visible beyond the tear gas – photo by ISM

As the protest continued in the hills around Nabi Saleh protesters gathered again and threw back a large number of the tear gas canisters still being rained down on them by the army and border police. By resisting the tear gas and throwing the canisters back towards the military themselves the protesters managed to push the soldiers and police back down the hills towards the village gate. Here they took cover behind their jeeps, unable to disperse the demonstration. 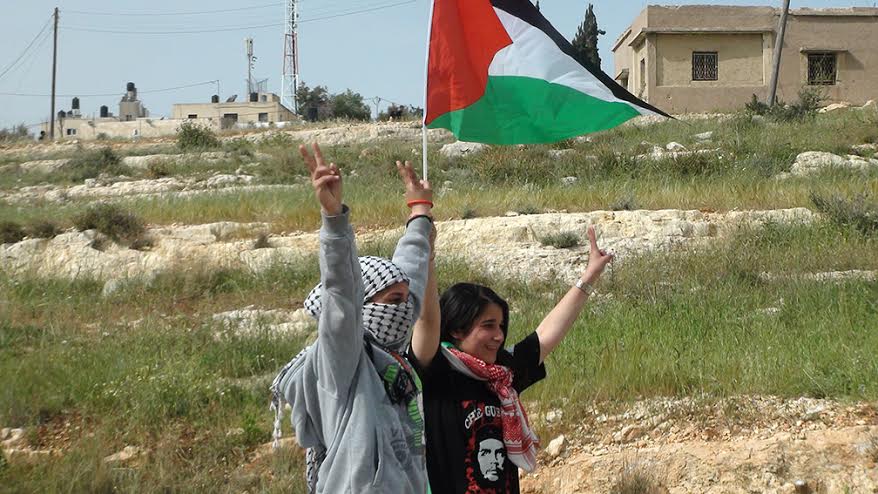 As the protest continued the soldiers began firing rubber coated metal bullets at the protesters who took cover behind stones and trees as the bullets jumped off the road between them. The bullets came repeatedly and several protesters were hit and carried from the scene.

As demonstrators ducked from the rubber coated steel bullets the sound of M16’s began to fill the air as soldiers fired towards Palestinian protesters, children, internationals and journalists on the hill with live ammunition. However, the protest continued for about half an our longer until the military got back in their jeeps and moved back towards the checkpoint at the outskirts of the village.

After most of the demonstrators had returned to the village, some gathered and continued the protest on a hillside in Nabi Saleh, above the valley where several soldiers had stood watching the protest. The Israeli forces once again opened fire with live ammunition. Fifteen M16 bullets ricocheted of the stones on the ground very close to the protesters, landing near children, women and a photographer but fortunately not hitting anyone.

The Land Day protests continue all over the West Bank throughout the week.