The people of Qaryut began weekly demonstrations three weeks ago, due to the Israeli military’s decision to close the main road near to the village.

Yesterday, the 18th April, approximately 300 from the village, of which 100 were children, decided to come to the hill to pray rather than to march. Israeli soldiers arrived immediately, with one soldier yelling: “Go back home!” A resident of Qaryut responded; “Insh’allah [If God wills it], this is our home.”

The prayer began despite the provocative military presence on the hill, during the prayers Israeli soldiers surrounded the gathering, one solider removed a Palestinian flag from its place in the ground.

As prayers finished, one of the villagers declared to the army that it was their intention to leave the area, repeating over and over that they brought “a message of peace”.

However, within a few steps of the people’s return to the village, Israeli soldiers started shooting tear gas at their backs. Due to the rocky terrain, many were unable to get away from the tear gas that the soldiers continued to fire. 15 people had to be treated by paramedics due to several tear gas inhalation, however it was difficult to access those in need because of the difficult conditions underfoot. Stun grenades were also used extensively by the Israeli forces.

Qaryut is surrounded by a number of large illegal settlements, including Eli and Shilo. The road closure could mean losing the part of the hill where prayers took place today. Loss of the road leading to the main route from the village to Ramallah has already caused significant economic hardship and many other problems. 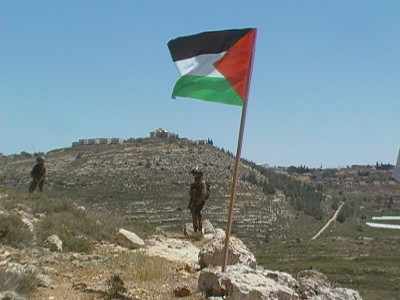