Village of Qaryut without reliable access to vital road

The village of Qaryut, located almost halfway between Nablus and Ramallah, has been waiting for the last year to have a reliable and secure connection to Road 60. This road is essential to connect the village with the city of Ramallah, where most of the population carries out daily activities, such as working and studying.

Currently the people of Qaryut are trying to access this road through a two-kilometer dirt road that finishes directly beside Road 60. Only half of this road is properly paved, the rest of it is uneven and rocky, where vehicles need to slow down to travel safely. This dirt road was recently blocked by an earth mound, recently removed by the people of Qaryut to allow vehicles to get close to Road 60. The local Palestinian population then waits to be picked up at Road 60 by buses or taxis travelling to Ramallah.

According to Raed Muhsen (Local Councilor), this wasn’t always the case. The road was built in 1983 and the people of Qaryut could travel freely. This arrangement ceased in 1991, during the First Intifada, when Israel forces alleged “security measures” to withdraw the permits and close off the road.

Qaryut and Road 60 could be easily connected if Israeli authorities granted the permits that are requested from Palestinian local authorities. According to Mr. Muhsen, the Local Council presented all the necessary documentation to the Israeli authorities three years ago, however the Israeli legal system continues to delay the issue, claiming that there are important “security measures” to be taken into account. The permits necessary to finally establish a connection between the local road of Qaryut and Road 60 need to be granted by the Israeli Ministry of Transport, Ministry of Defence and the Israeli Settlement Security Council.

Given the current situation, the local population of Qaryut has grown impatient with Israeli authorities. Mr. Muhsen states that a non-violent demonstration has begun in the last month to demand a reliable and secure access to Road 60. The last demonstration took place on the 11th of April, when people from Qaryut reached Road 60 on foot and held their ground on the road for approximately one hour. The Israeli army shot tear gas canisters and stun grenades at the demonstrators, despite the non-violent nature of the protest.

The village of Qaryut, with a population of approximately 3,000 people, is surrounded by several illegal Israeli settlements such as Eli and Shilo. Taking into account nearby Palestinian villages, it could be up to 8,000 people that are forced to find a lengthy alternative route to reach Road 60. This could be approximately 20 kilometers in length, compared to the two kilometers between Qaryut and Road 60. Such distances in case of emergencies can have a critical impact on the local population, on top of the obvious economical effects. 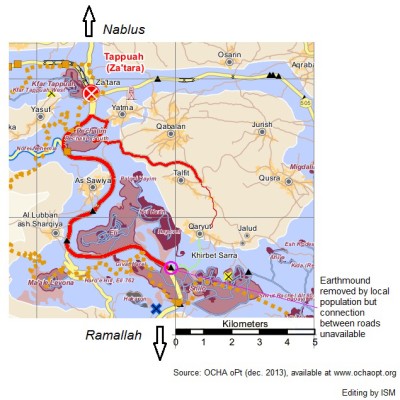