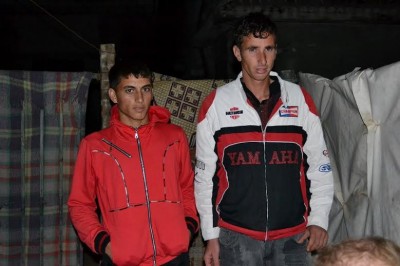 Ammar Asad al-Sultan, age 19, and Mohsen Zayed, age 25, were on a small fishing boat, or hasaka, without an engine, about one mile off the coast of Soudanya in the northern Gaza Strip.

Israeli forces released them about 3:00 am the following day.

Ammar Asad al-Sultan lives in an area called Salatin, in the north of the Gaza Strip.

“We went fishing at 5:00 pm,” he said there Tuesday. “Around 6.30 pm, an Israeli gunboat approached our boat and the Israeli soldiers opened fire into the water. We tried to quickly pull our nets in order to escape, but we could not.”

Without a motor, the two fishermen could not escape. “I’m 25, and I have never experienced something so terrifying in my life,” Moshen said. “I was afraid of losing my life.”

On board, the Israeli soldiers brought the fishermen to the bow of the boat, cuffed their hands and feet, and covered their heads. A soldier asked them their names. The gunboat didn’t go directly to Ashdod, but moved south before doubling back and and reaching the Israeli port of Ashdod.

“In Ashdod, two soldiers took us to a small room,” Mohsen said. “They removed the handcuffs. Then, a military doctor checked our health, blood pressure and temperature. Then we were kept handcuffed again for about 30 minutes in a room, before they separated us and we were questioned individually. They removed the handcuffs and the hood from my head, and asked me about my family, my work, everything about my private life, how many children I had. Then an investigator asked me which political party I support. And he asked me how many brothers I have. ‘Eight,’ I replied. ‘You are a liar,’ he told me. ‘I’m not,’ I said. He insulted me and said, ‘You have nine brothers.’ I told him one of my brothers died when he was five years old, so I had not counted him.'”

After the interrogation, soldiers handcuffed the two fishermen, covered their heads and took them to another room. Ammar said soldier asked him to undress, then he checked his body with an explosive detector alarm able to detect weapons and even gunpowder. “The investigator, whose the name was Jamal, asked me why I was fishing in the forbidden area,” Ammar said. “Then he showed me a printed map and told me to mark my home. He asked me about my brothers and their work, and if I knew someone who works for Hamas. He said, ‘One of your brothers works for Hamas. We follow his steps every day.’ I told him that I don’t know anyone and my brother is not working for Hamas. The investigator told me, ‘I know everything happens in Gaza. We are watching at you. We could attach you, because your brother works with a terrorist organization.’ Then he told me to tell my brother to stay away from certain people because the whole family will be in danger if he is not be far away from them. The investigator repeated the same things 10 times. Then the soldiers handcuffed me.” 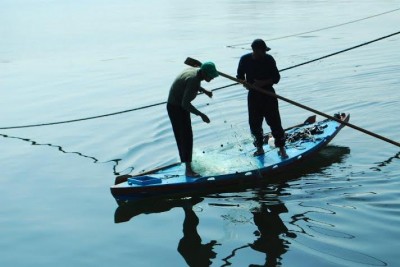 Israeli forces took the two fishermen to the Erez checkpoint before releasing them.

Their families depend on their fishing, they said. Without their boat, they don’t have any other means of subsistence.

Ammar’s father said this is the third time he lost his fishing nets. Israeli soldiers confiscated them, along with other boats. He went into debt to afford them.

“I call on the international community to allow us to live like people in the rest of the world outside Gaza,” he said. “I appeal the world to stop these crimes and help the fishermen of Gaza, especially the fishermen of the north of the Gaza Strip. Our children need clothes and shoes. Children do not know our problems. They do not understand why cannot have what they need. Now the winter is coming and I have no money to buy them new clothes.”

This is the second Israeli attack on Palestinian fishermen in only a week, as well as the second consecutive attack against fishermen on a boat without an engine one to two nautical miles off the northern coast of the Gaza Strip. Israeli forcesseem determined to prevent fishermen from accessing waters in the northern Gaza Strip. The actual limit imposed by Israel on waters north of Gaza is not six nautical miles, but one to two.

Under the ceasefire agreement reached by Israel and the Palestinian resistance after the Israeli military offensive “Operation Pillar of Defense” (November 2012),  Israel agreed that Palestinian fishermen could again sail six nautical miles from the coast. Despite these agreements, the Israeli navy has not stopped its attacks on fishermen, even within this limit. In March 2013, Israel once again imposed a limit of three nautical miles from the coast. On 22 May, Israeli military authorities announced a decision to extend the limit to six nautical miles again.