Demonstration in Ya’bad is violently repressed by Israeli forces

Yesterday in the village of Ya’bad, a peaceful protest was violently repressed by Israeli forces through the use of tear gas canisters, stun grenades and rubber-coated steel bullets. Demonstrators were directly targeted by Israeli soldiers, five Palestinians were injured and two were arrested.

Yesterday morning at approximately 10:00, six international activists from several solidarity organisations joined around 100 inhabitants of Ya’bad village in a peaceful march on a restricted road at the edge of the village. The event had been organized to protest against settler and soldier harassment. Illegal settlers recently cut down 67 olive trees in front of Israeli soldiers who did nothing to prevent their actions. Soldiers then later forbid Ya’bad residents access to the road that links Tulkarm to Jenin with no justification. Moreover, according to a source from the local municipality, the Israeli army often uses the village itself as a training ground for military maneuvers during the night.

The protest march started quietly, with a few speeches from the demonstrators to the media, in front of the ruined olive trees. Less than ten minutes later the first military jeep arrived, immediately giving the order that the protesters should leave the forbidden road. The demonstrators refused and continued their march.

Shortly after this, two other military jeeps and a larger military vehicle entered the village. After several minutes of the peaceful protest continuing, filmed by local media, the first stun grenades were thrown in the middle of the gathering, immediately followed by shots of tear gas canisters and rubber-coated steal bullets. Israeli forces were extremely aggressive in their attack, five Palestinians were injured after being shot with tear gas canisters and rubber-coated steel bullets, three of whom required hospital treatment.

While the demonstrators were taking care of the injured people, the Israeli soldiers took the opportunity to arrest two protesters with absolutely no legal justification.

Israeli forces continued their attack, forcing the demonstration back in to the village. As the villagers were returning to Ya’bad, the soldiers broke into a Palestinian home and took up position on the rooftop where they remained for a number of hours.

Despite the arrests and injuries from this this action, a Palestinian source confirmed the village deemed it a success, the demonstrators openly refused a direct order from the Israeli army and stayed peaceful in the face of violent aggression. 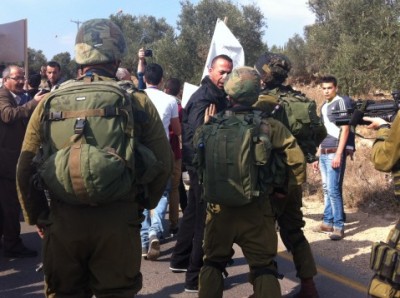