Yesterday, Wednesday the 23rd October, a Palestinian farmer and his family were olive picking in Kafr Qalil together with international activists. Close to the fields is the illegal settlement of Bracha and one settler aggressively intimidated the farmer until he left the area. Later during the day the farmer was able to access the olive trees, but only with close Israeli army and border police surveillance.

At around 7am yesterday morning a farmer, his family and several international activists were trying to pick olives in an area very close to the settlement of Bracha. The land of the farmer is separated by a street that leads to the illegal settlement. Before the group was able to cross this road, one settler arrived in his vehicle. He was aggressive and as the farmer and his family had been attacked in the past, they decided to leave and pick in a safer area. The farmer, his family and the international activists later returned, no settlers arrived and they were monitored by Israeli forces. The Israeli army followed the group and stood on the street observing the olive harvest, though they did not disturb the olive picking any further.

Several years ago illegal settlers destroyed a great number of olive trees to build a garden for their illegal settlement. This year, as well as last year, the farmers in Kafr Qalil have to deal with settler attacks and harassment by the Israeli army and border police. Some of the olive trees close to the settlement were burned and were therefore carrying very few olives this year. 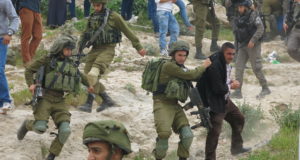 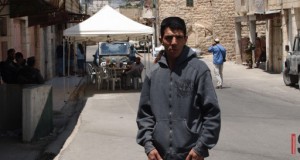 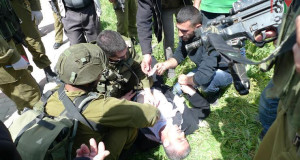 Peaceful tree planting attacked by settlers and soldiers, two hospitalised and one arrested