24th June 2015 | International Solidarity Movement, Al Khalil Team | Al Khalil, Occupied Palestine
Around 8:30 this morning on Shuhada street in Hebron, Israeli settlers, soldiers, and border police arrived and put up a breakfast tent right outside of two shops owned by a Palestinian man. The settlers remained in front of his shops for around three and a half hours under Israeli police and army protection.
The owner of the shops, which will be used to grind wheat into flour, is Ghassan Azzedine Abu Hadid. HRC has been working with him to facilitate the restoration of his two shops. Because of the presence of the settlers, he has been prevented from working on his shops in order to make them ready for opening.
International Solidarity Movement activists were present and asked Ghassan for a statement on what was happening to which he replied “I cannot say anything, I just want to open my shops and continue my work.”

Ghassan Azzedine Abu Hadid standing in front of the settlers and soldiers who are blocking his shops.

ISM’ers approached the Israeli border police whilst the settlers were still present outside Ghassan’s shops and asked if any of them spoke English, to which they replied no and proceeded to call some Israeli soldiers over. An ISM activist asked the soldier “Just wanted to know, why you are allowing this tent to be here in front of this Palestinian man’s shop? Why are the settlers here and why are they being protected by the army and police?” The Israeli soldier replied “This is your opinion. We are just here to protect the settlers.” ISM activist then states “You know that the New York Times is planning on publishing an article that 70 Palestinian shops on Shuhada street are ‘supposed to be opened’, but the reality is this *activist points to the settler tent preventing Palestinian shop from opening* you know that this *points again at the tent* is going to go world-wide, right?” Israeli soldier replied “OK…let me tell you what the Arabs do to us.” ISM activists at this point then noted that the Israeli soldiers across the street were yelling at the soldiers speaking to the activists. ISM activists can only assume that they told the other soldiers not to speak to us, as the conversation then came to an end. 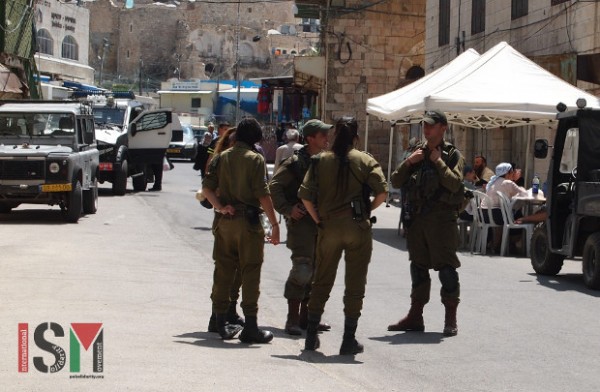 At around 12:00 PM, most of the settlers walked back to the illegal settlement of Beit Hadassah. Only one settler remained behind as the Israeli army helped him to pack the tent and chairs away.
Another Palestinian shop owner, who would like to remain anonymous, told ISM activists: “This is not the first time that Israeli settlers and soldiers have done this, they targeted these two shops specifically because they are getting ready to be opened. The settlers caught wind that this Palestinian man was planning on opening and now they are here with the tent.” He then stated about the recent news of 70 Palestinian shops opening on Shuhada street as “an Israeli publicity stunt.”
It is important to note that without the presence of the Israeli soldiers and border police, the settlers would not have been able to set this tent up in front of Ghassan’s shops. This event was clearly planned by settlers in conjunction with the Israeli forces. 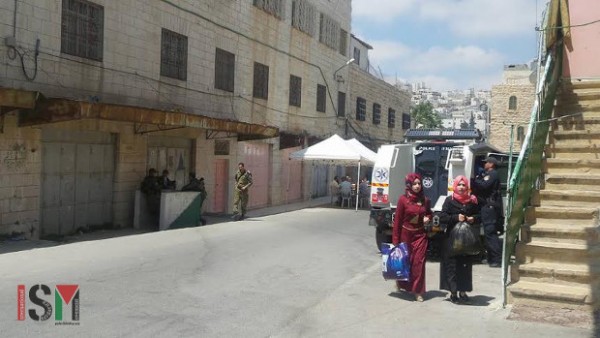 Palestinian women walking past the heavily guarded area around the tent.