Peaceful tree planting attacked by settlers and soldiers, two hospitalised and one arrested

On March 31st around 40 Palestinian children and adults gathered in Hebron near Qurtuba school, a Palestinian school in the H2 neighbourhood of Tel Rumeida, to plant trees in commemoration of Palestine’s Land Day. Israeli extremist settlers from the illegal settlements in Al-Khalil (Hebron) attacked them as Israeli forces stood by, threatening to arrest the Palestinians and international volunteers while doing nothing to stop the settlers’ violence. Settlers pushed a 13-year-old girl down the stairs leading up to the school, and soldiers injured a 48-year-old man with a back condition; both were hospitalised. Israeli soldiers also arrested Jenny, a 24-year-old German solidarity activist, while she was filming the action. 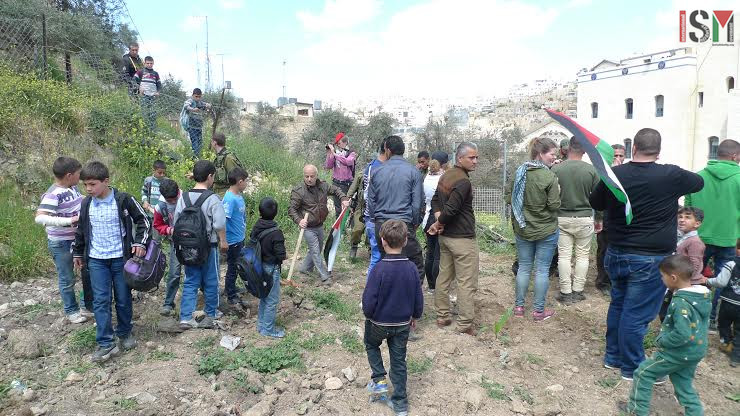 Military harassment began even before activists had reached the planting site. Jenny, the German activist later arrested at the demonstration, recalled the difficulty of getting the trees to the site: “Half of the trees had already gone through the checkpoint when Israeli soldiers decided that, as one officer put it, ‘trees are sensitive items’ and that the children carrying them would not be allowed through.”

“It was a very peaceful action,” she recalled. “Small children were planting trees near the school in Tel Rumeida.  Everything was calm until Anat Cohen (a notoriously violent extremist settler) turned up; she began taking down the Palestinian flags demonstrators had put up on the fence beside the tree planting site, then randomly attacking Palestinians and international volunteers.” 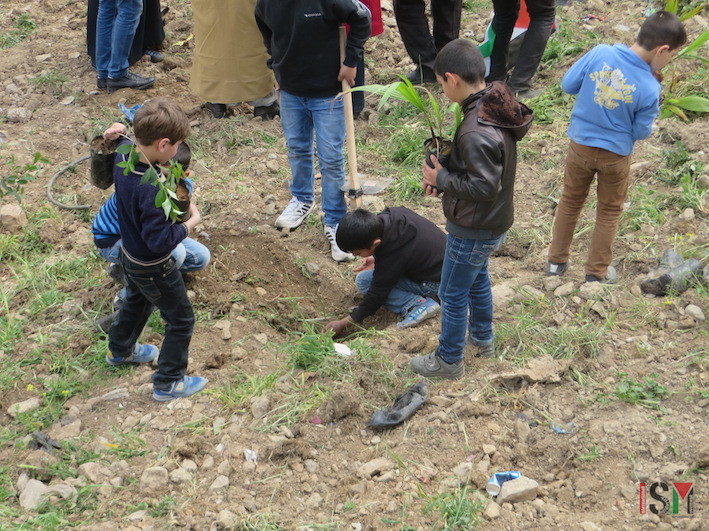 Extremist settlers pushed a 13-year-old Palestinian girl down the stairs close to the tree planting site. She was taken to the hospital half an hour later. Israeli soldiers harassed her friends and told them they were not allowed to sit beside her. A 48-year-old Palestinian man who had just undergone surgery on his spine was pushed violently by Israeli forces, despite the fact that soldiers were told several times that the he suffered from severe damage to his back. When they continued to shove him against a wall, he collapsed and lost consciousness for several minutes, and was taken to a hospital via ambulance. 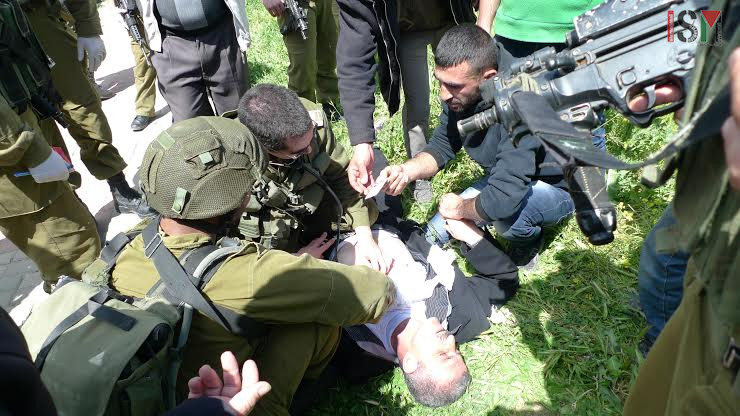 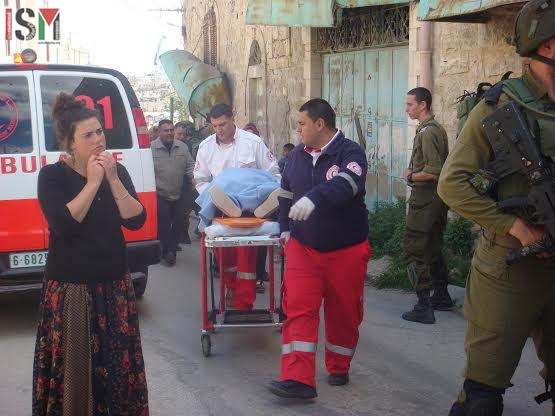 Injured Palestinian being taken via stretcher to the ambulance, as a settler in the foreground watches the scene

Settlers and soldiers continued harassing people; settlers accused many of being nazis, swearing at and insulting the demonstrators. Palestinians looking out from their houses were told to step away from their front door. When internationals tried to document the situation, they were met with yelling and pushing from Israeli soldiers as well as settlers. 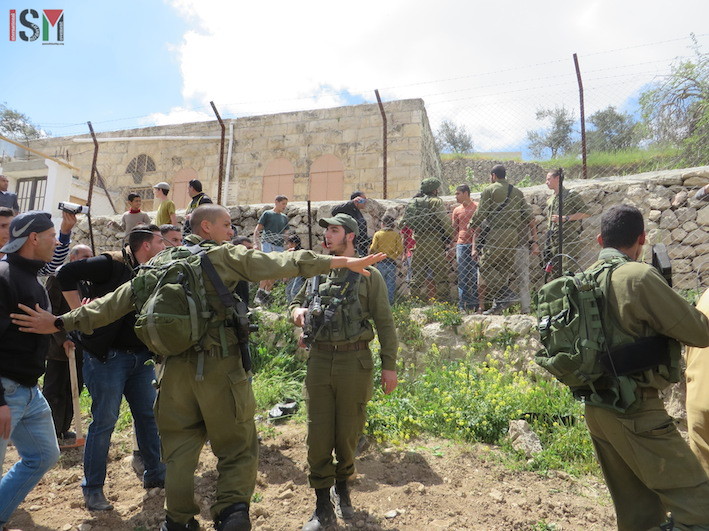 Israeli soldiers at the tree planting demonstration in Hebron

Amanda, an ISM volunteer present at the scene, recalled what she experienced at the hands of settlers and soldiers. “I was being attacked from all sides. A soldier shouted at me, brandishing handcuffs at me and threatening to arrest me even as a settler woman physically assaulted me. She stepped on my feet, kicked at my legs and punched me in the stomach, calling me a nazi and a[n extremely vulgar word for prostitute].”

Jenny spoke of her arrest, based on spurious testimony by the settler woman. “At the police station I was accused of attacking Anat Cohen. While I was filming her and the soldiers earlier as soldiers forced back the Palestinian group, she grabbed my hand and attempted to take my camera. I told soldiers at the time that she attacked me, but they paid no attention. They grabbed me and violently pulled me away from where I was documenting the tree planting.” Israeli soldiers took her to the military base on Shuhada street before transferring her to the Israeli police, who interrogated her and held her at the police station before releasing her early that same evening, after about five hours in custody. She has been temporarily barred from the city of Hebron.

“As people were leaving I saw soldiers trampling all over the area,” an ISM volunteer recalled. “I doubt that the trees survived.” Tuesday’s action was the third time in the last few months that Palestinians gathered near the school to plant trees on their land in Tel Rumeida. Three weeks ago olive trees were planted in the same area, but zionist settlers uprooted and stole them.

Later in the afternoon a Palestinian funeral, in the nearby Muslim cemetery, was disrupted by settler children who taunted the mourners.