It’s Eid al-Adha, the festival commemorating Ibrahim, or Abraham as the Christian part of the world knows him, and his willingness to sacrifice his son. He never had to do it, and none of the three monotheistic religions are associated with human sacrifice, since his son was replaced by a ram. And it’s meat that is central to dining tables during this commemoration. 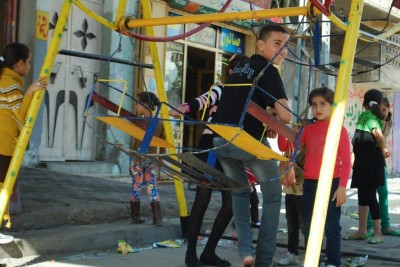 According to custom, the more affluent share their abundance after slaughtering their best animals. One third is given to the poor, one third to relatives, friends and neighbors, and the remaining third remains on dishes at home. Most of the wealthy no longer keep livestock, but rather buy food and then distribute it. It’s not uncommon to see people knocking on doors with bags in their hands. 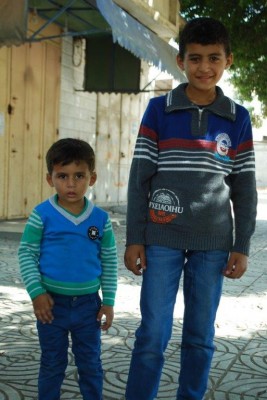 This religious festival is not primarily about meat. But like the Christian part of the world celebrates Christmas, gifts and sweets are obvious feature. And clothes. Wherever you go in the streets you see people in their finest, and preferably new, clothes. Children are shorn and dressed up, and move more cautiously than usual so as not to dirty themselves. When darkness falls, people fill the streets to socialize and enjoy. There is an exhilaration that, to an observer, not even the intensified overflights of F-16s seems to obstruct. 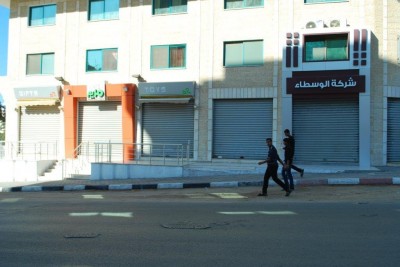 A row of stores closed for the holiday. (Photo by Charlie Andreasson)

But  something casts a shadow over the celebrations. The situation is getting worse in this coastal strip. Now that Egypt has made common cause with Israel, it is precariously difficult for people and goods to cross the border. The destruction of smuggling tunnels, the lifeline for people and businesses, has deepened the crisis. In addition, the media shadow is also falling over Gaza, as its siege has been all but hidden by the crisis in Syria. Last year, charities distributed 400,000 kilograms of livestock and winter clothing for 3,000 children. This year, there was significantly less. And rising unemployment, as a result of the intensifying blockade and warfare by the occupation forces against farmers and fishermen, has put its mark on the celebration of Eid. 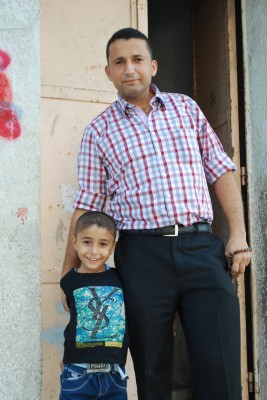 A father and son in their Eid clothes. (Photo by Charlie Andreasson)

A poor society is rarely equal. Although some can manage well, while others seem to do so, the proportion of destitute people constantly increases. For them, Eid is another moment of exclusion from society, when they do not have enough food on the table to invite family and friends over, when they do not have new clothes to show off, when the consequences of the occupation, its heavy shade, prevent them from rejoicing with the diminishing ranks of those who can.

Eid al-Adha occurs the day after pilgrims complete the hajj pilgrimage to Mecca. For many of the people of Gaza, the pilgrimage was an impossibility, and had it been possible, they would have returned to empty plates. The intensifying overflights to mark the occupying power’s presence are hardly necessary. The consequences of its policies are increasingly clear, even without this constant reminder.