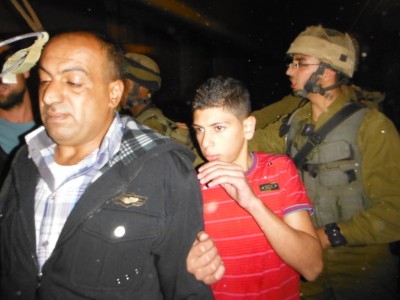 The young teenager and his father with the Israeli soldiers

Yesterday, 15th October, a young teenager visiting his family was detained from inside a Palestinian home after it was forcibly entered and searched by armed Israeli soldiers on the evening of Eid.

A Palestinian family’s home was entered on the evening of the 1st day of the Muslim festival of Eid by at least 8 Israeli soldiers. According to other family members the soldiers were searching for a toy gun. The family of 6 were locked into one room whilst the Israeli soldiers ransacked their home breaking beds, upturning furniture, and throwing clothes and jewelry around the house. International activists asked to enter the house but were forcibly prevented by several armed soldiers.

The Israeli soldiers eventually left the house, detaining the young teenage boy and his father. When the international activists tried to question the soldiers about the detention, they were aggressively and forcibly pushed away and prevented from communicating with the father and son.

The father and his son were marched to a military base where the father was released soon after, leaving the teenager detained alone for several hours.

He was then taken from the military base in a police vehicle and released to his family. He was ordered to report to the police station at 9am this morning. This is the third time in three weeks that the Israeli army has entered this Palestinian home with little or no reason given for these intrusions