The Gaza Strip is closed and more besieged than ever

Israel continues to maintain a full, tight closure by land, sea, and air, on the only coastal enclave left to Palestine. This has become even worse since July, as the Egyptian government closes the Rafah crossing on a regular basis and has destroyed many tunnels through which the inhabitants of Gaza could receive food, medicines, fuel and construction materials that Israel bans from entering or allows in insufficient quantities. 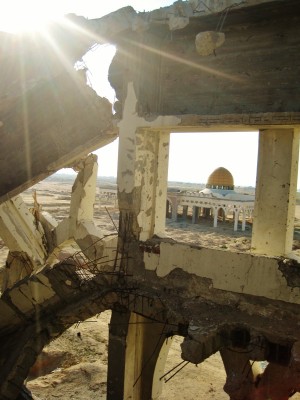 The Rafah border crossing, through which it was possible to get in or out, is now closed whenever Egypt decides, and open for only a few hours. In fact, from my entry on Saturday until Wednesday, it has been closed. It is not known when they will open it again. We are jailed. Patients cannot travel to hospitals abroad, and some of them have already died. Lots of students, registered in foreign universities, are stuck here. Even Palestinians who have been working in foreign countries for many years have lost their jobs after not being allowed to leave.

I have been lucky enough to be able to come back to Gaza. But a trip that should take four hours from Barcelona to Gaza has taken me four days. The Rafah airport, built with foreign funding, operated from 1998 to 2001, when it was bombed and bulldozed by Israeli armed forces. Gaza has been completely besieged by Israel for seven years, and also by Egypt since July of this year.

From Cairo to Rafah there are some 370 kilometers by road, crossing the Sinai Peninsula. The flights from Cairo to el-Arish, about 50 kilometers from Rafah, were already quite expensive, but now, as el-Arish is considered a war zone, there seem to be no flights.

I was lucky not to have chosen 6 October, when a national holiday is celebrated in Egypt, to arrive in Cairo. Because of the clashes there, 51 people died and hundreds were injured and arrested. I did not board any of the flights arriving in Cairo by 2:00 am, either, because there is a curfew after midnight. It was great that two men unexpectedly waiting for me when I got off the plane were really from the Cairo press center. I could not forget that a journalist and a psychiatrist, both Canadian, were arrested by the Egyptian government while going to the Gaza Strip. They were still in prison when I arrived.

As there were no more bus tickets to el-Arish on Friday, I took the bus to Ismailia, some 130 kilometers from Cairo, with the intention of getting the one to el-Arish from there. I could have taken a shared taxi from Cairo, but have always preferred to travel by bus, as I think the danger of being kidnapped is less. Four foreigners had recently been kidnapped while travelling through the Sinai Peninsula. There was news that the Rafah border crossing would be open on Saturday. I could not travel to el-Arish until Friday, as it seemed the military did not want foreigners around, especially if they were journalists. I could stay in el-Arish overnight, since if you take the bus in the morning from Cairo, when you arrive in Rafah via el-Arish, the border will have been closed since 2:00 pm.

But when I arrived in Ismailia, I had to travel on to el-Arish in a shared taxi for seven people. I was the only woman and the only foreigner. The Egyptian student who so kindly and selflessly arranged my trip, and obtained a good price for me, also gave me her telephone number, so that I could call her on my arrival to make sure everything was okay.

I had previously been told that on my arrival to el-Arish, the military would be waiting for us, and that I should show my willingness to make no problems and follow their directions. They were very busy when we arrived there, though, due to some attacks on the zone, and the taxi driver was able todrop me at the hotel. On our way there, we were only asked to show our identity cards and passports twice. Finally, when on Saturday at midday I could cross the Rafah border to the Palestinian side, I couldn’t help shedding tears when I saw a bus full of Palestinians that had just been rejected on the Egyptian side and forced to return to Gaza.

On Monday, the Spanish embassy in Cairo had been unable to reach me. I had not advised them that I had arrived safely, nor told the newspaper for which I am writing, the 3deVuit in Vilafranca del Penedès, Spain. The embassy phoned them, they both kept calling me, and in the end, I could confirm that I had arrived safely to Gaza, to their relief. I am so grateful to them for their concern for me.

In Gaza, I have seen people much more distressed than before. They cannot understand why they have suffered this tight Israeli blockade, now worsened by the Egyptian one, for seven years while the world keeps silent. They feel abandoned by other countries. There are shortages of food, medicines and fuel. There are daily cuts of electricity and Internet for more than 10 hours. Fishermen cannot fish because there is not enough fuel. The Egyptian navy has also fired at them several times. Israeli F-16s hover above our heads, each time lower and lower. Israeli tanks and bulldozers launch incursions into the “buffer zone,” destroying Palestinian land and the work done by Palestinians farmers there, almost every day. But now it is the Muslim festival of Eid al-Adha. and everything possible is done so that children may feel happy. Their mothers have made cakes for them.

This article was first published in Catalan by the 3deVuit newspaper in Vilafranca del Penedès, Spain.