New
Home / Journals / A letter from Nariman Tamimi to the world

A letter from Nariman Tamimi to the world

On 27 September 2011 Palestinian prisoners held in Israeli prisons announced the start of a campaign of disobedience to protest an escalating series of punitive measures taken against them by the Israeli Prison Service. Today marks the 8th day of their hunger strike.

A call for Solidarity actions around the world has been issued for this friday 7/10 where you can find your local initiatives here.

Today outside a sit-in at the Red Cross in Ramallah I met with Nariman Al Tamimi from Al Nabi Saleh village. 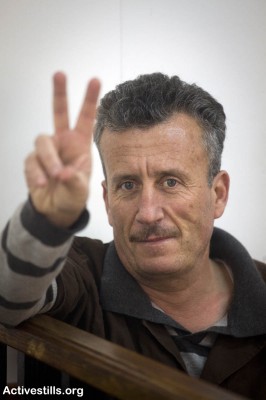 Nariman is an ex-prisoner herself and the wife of the political prisoner Bassem Al Tamimi. As a resident of the village her family has been suffering from the Israeli occupation on a daily basis. In the space of 5 years she has been shot a total of 7 times, while her eldest son Wa’d who is 14 years old has been shot with rubber bullets over 10 times. Furthermore, their house faces the threat of immediate demolition by Israeli forces.
Due to her history Nariman has become a symbol of “somoud”- steadfastness- to many Palestinians. Despite the endless tragedies she is continually facing, she never wavered from demanding for her and her people’s full legitimate rights. Today from the sit-in in Ramallah, Nariman wished to send a message to the world urging them to take solidarity actions with the hunger strikers in Israeli jails.

I want to tell the world about international law and all the human rights resolutions that are meant to protect including the rights of prisoners of war. I would like to ask why these laws are not protecting our prisoners? Why are the human rights activists not doing anything regarding the Israeli violations? Why is the world still silent?

All we want is to be able to see our sons, daughters, husbands, fathers and mothers. We want them to be treated according to International Law. We want to have our rights like anyone else around the world. I am sure most of you heard about the Israeli captured militant ‘Gilad Shalit,’ but I wonder if you heard about the 8000 Gilad Shalits in Israeli jails? Most of the them are civilians, including children and women. I call all human rights organizations and activists to take the side of justice and save our prisoners.

Statistics of Palestinian Political Prisoners:
-340 Palestinian children are being held in Israeli Prisons
-There are well over 120 women in Israeli prisons, 17 of these women are mothers. 2 have given birth in prison. The youngest female currently held is 12 years of age.
-The majority of these detainees are being held in violation of the IV Geneva Convention in prisons outside of the West Bank and Gaza Strip.

Say NO to injustice and take part of the solidarity actions with Palestinian Prisoners. Visit here for more details.