As the world reels from the global COVID-19 pandemic, and the global struggle for racial equality and justice spreads, Palestine once again finds itself at a pivotal moment in the history of its struggle for freedom and human rights.

Covid-19 has caused severe disruptions around the world, and its effects have been extreme in the occupied West Bank and the besieged Gaza Strip. The Israeli Occupation has exacerbated and taken advantage of the global health crisis. In the West Bank, inhumane checkpoints where Palestinians are inhumanely herded have proved major transmission zones for the virus, while illegal settlers increased violent attacks on Palestinians during lockdown. In Gaza, a decade of besiegement that has starved the strip of medical supplies, bombed hospitals, and daily power outages are only some of many problems. All of this has made preparation for the pandemic virtually impossible. Furthermore, the long term issues of overcrowding in refugee camps, water and food shortages, and Israeli bans on importing medical supplies all exacerbate the challenges of social distancing and disease containment. This has led to a rapidly deteriorating situation, termed “A Nightmare Within a Nightmare” by international health experts.

During the current pandemic, the Israeli government is moving to enact the annexation bill – to extend Israeli control across the Jordan Valley and much of the area surrounding the illegal settlements, legalizing their own crimes with self-created laws. Scheduled for July 1st, the annexation of the West Bank will increase violations of Palestinians’ few remaining rights and create new forms of discrimination and apartheid.

Scheduled on the eve of annexation, the International Solidarity Movement will host a webinar and Q&A session, providing a comprehensive overview of the current oppression of the Palestinians and nonviolent resistance to occupation. Our speakers will explore these issues from a legal, journalistic, and political perspective, together with activists on the ground joining us live from Tulkarem, Nabi Saleh and Gaza. 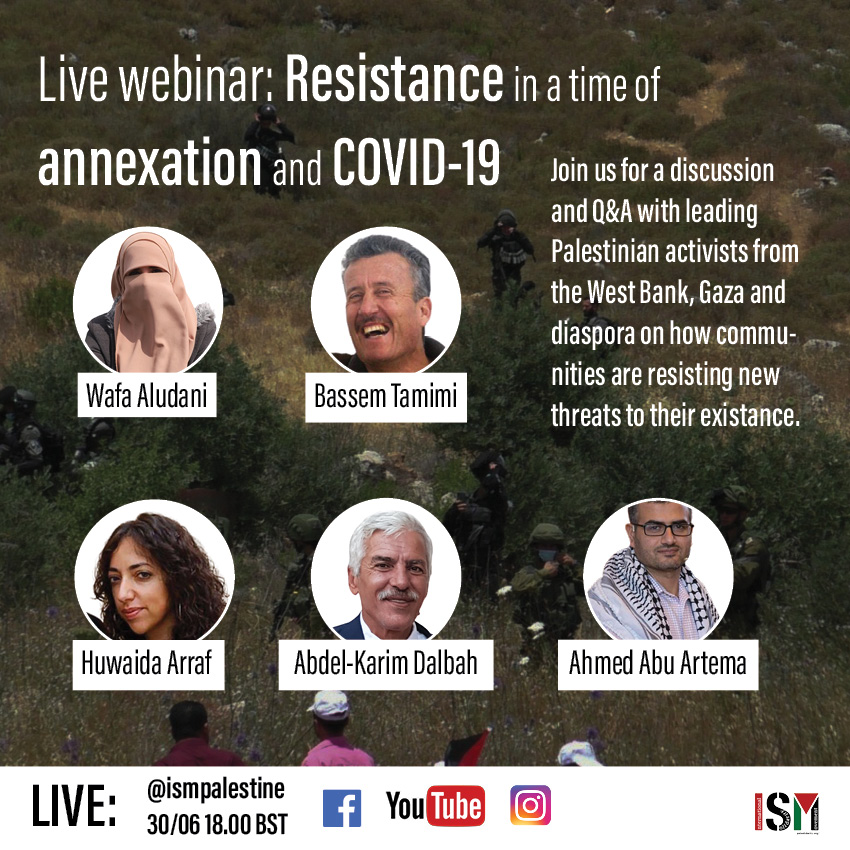 The webinar will be facilitated by Huwaida Arraf, a Palestinian-American joining us from Detroit. A civil rights attorney and human rights activist, Huwaida has conducted research for the Public International Law and Policy Group and is a former chairperson of the Free Gaza movement, part of a long career as a human rights and international law specialist. She is also one of the founding members of the International Solidarity Movement (ISM).

Joining us from the village of Nabi Saleh in the West Bank is Bassem Tamimi. Born ten weeks before the 1967 occupation of Palestine by the Israeli Occupation Forces, Bassem Tamimi has spent his entire life as a grassroots activist. His commitment to non-violent resistance has been recognized by the European Union and Amnesty International. His daughter, Ahed Tamimi, was imprisoned for 8 months as a child for slapping an Israeli soldier after her cousin was shot in the head. He mainly works in Nabi Saleh, a village that has become encircled by Israeli military infrastructure and illegal settlements.

A journalist and coordinator of the Foreign Media Unit in Al-Thorayya, Wafa Aludaini will be joining us from Gaza, where her parents fled during the Nakba. As a journalist she has covered the Israeli siege of Gaza for over a decade, as well as Israeli invasions in 2008 and 2015. More recently, she has reported on the Great March of Return which she attended even as the UN found Israeli snipers had intentionally targeted and killed journalists during the protests.

Palestinian journalist, field researcher and human rights defender. An ISM coordinator for almost two decades and an educator in nonviolent resistance, Abdul Kareem has been campaigning for human rights and Palestinian emancipation since the 70’s. Abed will be be talking about the upcoming annexation and strategies for international solidarity with Palestine, based on his decades of experience, historical perspective, and current activism

Joining from Gaza is a founder of the Great March of Return, Ahmed Abu Artema. Thousands of Palestinians met his call on Facebook in 2018 to take part in a massive peaceful protest towards the barrier fence surrounding them, to demand freedom and the right of return. Ahmed was born in Rafah and is a refugee from Al Ramla village. He works as an independent journalist and author.

The webinar is hosted by ISM. The International Solidarity Movement (ISM) is a Palestinian-led movement committed to resisting the long-entrenched and systematic oppression and dispossession of the Palestinian population, using non-violent, direct-action methods and principles. Founded in August 2001, ISM aims to support and strengthen Palestinian popular resistance with our activists working alongside Palestinians inside the West Bank and Gaza.

The Webinar will take place at 20:00 Ramallah time, EEST (17:00 GMT). It will consist of updates, news, and examples of how internationals can support Palestinians during these times. It will also feature an Q&A session; if you have a question, either for a specific activist, or in general, you are welcome to send it in, to ismtraining@riseup.net. The entire webinar will be streamed live on Facebook, Instagram and Youtube.