As every year during the summer, the water shortage in the Gaza Strip is accentuated. At the same time, the energy shortage caused by the blockade prevents engines and water pumps from pushing it from wells and tanks to houses and farming fields.

We collected several testimonies of people affected by this problem in order to discuss them with the engineer Monther Shoblak, General Director of the Palestinian National Authority Coastal Municipalities Water Utility (CMWU).

The first testimony is that of Azzam Miflah El Sheikh Khalil, who says “the water comes only once every three days, and just for a few hours, which is not enough [to fill the tanks]. People can’t imagine how we are suffering because of the lack of water. In addition, there is no difference between the water from our wells and the sea water… The main problem is that when there is electricity there’s no running water and when there is running water there’s no electricity . The only solution we have is to buy a generator to produce electricity when there’s water, but who can buy it if there is no work?” 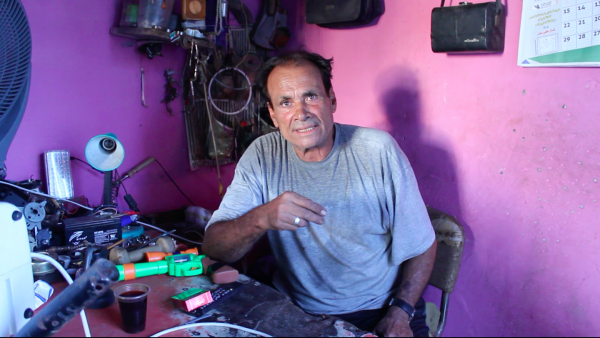 In the next block lives the Mokhtar Kamal Abu Riela, who stressed the same problem, “when there’s water there’s no electricity, and vice versa. Maybe once every four or five days we have water and electricity at the same time for a few hours. Every day we buy gasoline to run the generator the hours when there’s running water, but the economic situation of the people is very precarious and not everyone can spend 20 NIS a day on gas just to have water in the tanks. We spend more on gasoline than in electricity or water itself”.

We asked the Mokhtar if he remembers when that problem began “ten years ago or so, with the blockade”.

Finally Im Majed Miqdad explained the difficulties she and her large family are faced with in their day to day life due to water scarcity “there’s people who build underground tanks [as those can be filled without bombs] or who buy a generator operated with gasoline. But not everyone can afford these things. I’m one of those people who can not pay NIS 20-30 a day in gasoline to run the generator. Today, for example, in my home and in the homes of my four sons and their families we don’t have a drop of water, the four tanks are empty. We are waiting until running water and electricity will coincide in order to fill them. The situation is very hard, we have no water, we have no electricity, we have no work … If water and electricity would coincide at least three hours a day it would be enough to fill the tanks enough to spend the day. People must understand that when there is no water you can not use the bathroom, you can not take a shower, you can not clean the dishes, the house, the clothes … And here the families have five, six, ten members … we are not just two or three people in each house”. 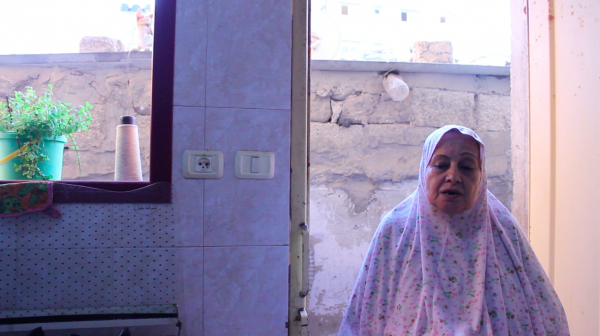 Im Majed Miqdad, who is often left without water supply

Given the frequent complaints of the population the first thing that the engineer Monther Shoblak wants to explain is that the failures in the water supply are due to the power cuts and therefore they can’t control them. “It is impossible for us to match the running water with the electricity, as to carry water from one area to the other, motors and pumps are needed and those can’t operate without electricity. We can’t control it because we don’t know which bomb will fail and when”. 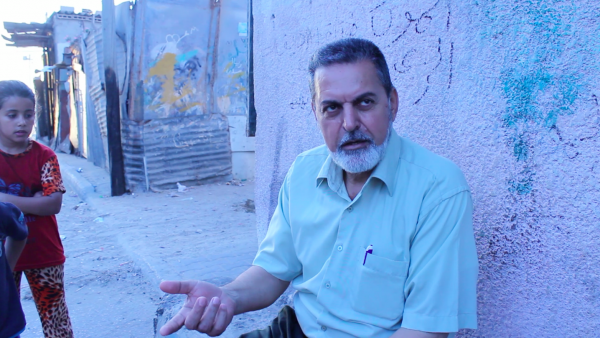 However, he explains, the water problem in the Gaza Strip is more serious than that. “Indeed there is an over-exploitation of the aquifer in the Gaza Strip. This is because the coastal aquifer, which runs from Sinai to Yaffa and that is the only source of water available today in the Gaza Strip, has been nurtured historically by rainwater and by the water from the mountains of Al Khalil (Hebron) and the Naqab. However, for decades our neighbors [the zionists] have been building dams that prevent the water from following its natural course to Gaza, leaving rainwater as the sole source of the coastal aquifer. These dams are illegal, since they involve a violation of the conventional agreements on transboundary water sources. “

This overexploitation is decreasing to an alarming point the level of the aquifer, causing seawater to seep and fill that vacuum, mixing with the fresh water and contaminating the aquifer. Additionally to this chloride contamination caused by seawater seeping into the aquifer, the water is contaminated by nitrates from leaking sewage and fertilizers. “These are more dangerous than chlorides, as they can’t be detected by smell or taste”.

The successive attacks on the Gaza Strip have severely affected the sewage systems and destroyed thousands of septic tanks, causing in many cases wastewater to end up in the acquifer.

In addition, due to the lack of resources of local authorities only 72% of Gaza is ecquiped with sewage systems, the rest depends on septic tanks that are built without supervision. “The occupation never provided the necessary services, such as mandated by international law. They didn’t build enough plants for wastewater treatment in order to protect the environment. If we look at the objective data it seems that their intention was just the opposite. These plants shouldn’t be built in sandy areas, to avoid leaks, and should have an exit to the sea to prevent overflow in case of emergency. However they built the main one in Beit Lahia, the sandiest area in Gaza and without exit to the sea. So when there is an overflow, which is quite common, wastewater inevitably ends up in the acquifer and contaminating farmlands in the area”. 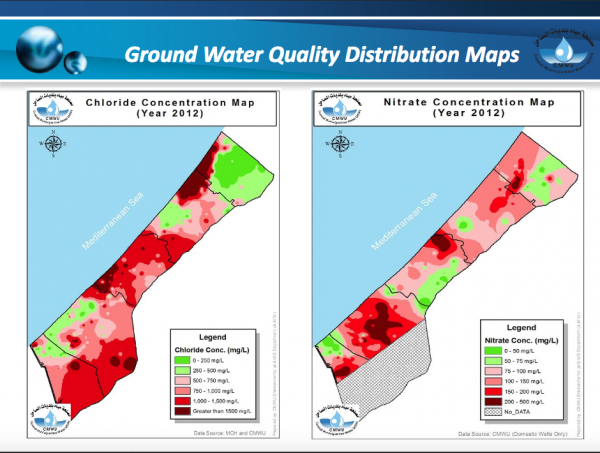 At the same time several cases of viral meningitis arose all along the Gaza Strip, with some mortal cases. Those seem to be caused by wastewater contamination. This situation has forced the local authorities to close many swimingpools and advice the people not to swim in the sea during the next weeks.