In occupied al-Khalil (Hebron), possibilities for Palestinian children to play are scarce. With the help of the Playgrounds for Palestine project, a brand-new playground was installed at Qurtuba school in the Tel Rumeida neighborhood of al-Khalil.

Right to play – can you imagine that as a child, when playing, you’d need to be scared of being attacked, your parents worried whenever you’re out playing, and playing with your friends and enjoying something that is denied to you by a foreign occupying army?

The Tel Rumeida neighborhood is in the H2 area of al-Khalil, under full Israeli military control. After more than six months of collective punishment by the means of a ‘closed military zone’, deliberately designed to affect only the Palestinian population, this measure was officially lifted on 14th May 2016. Despite the lifting of some of the measures intended to forcibly displace the Palestinian population – and thus only a slightly disguised attempt at forced displacement, many of the restrictions applying on Palestinians have remained in place.

A staircase leading to Qurtuba school at the end of the tiny strip of Shuhada Street where Palestinian pedestrians are still allowed to be, is still under a complete closure – for Palestinians, whereas settlers, Israeli forces and anyone resembling a tourist is allowed to pass freely. This apartheid measure severs all the families accessing their homes through these stairs, as well as visitors to the Muslim cemetery and a weekly second-hand market of their main access, forcing them to take long detours. The many restrictions have also forced the project to carry large amounts of the materials through the neighborhood, as Palestinian cars are not allowed in the area. On one day, the workers were prevented from continuing their work on the playground and forced to leave by Israeli forces. 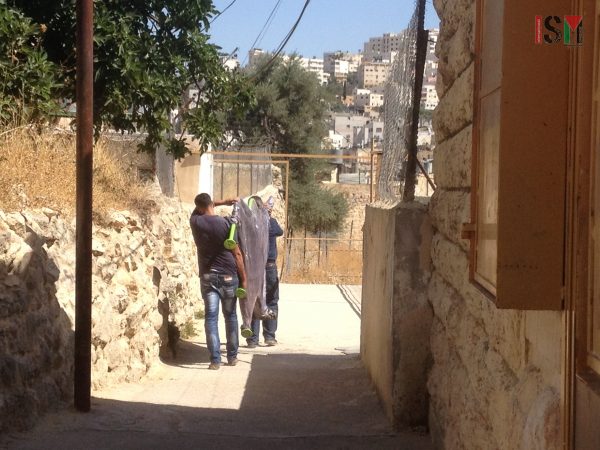 Palestinians carrying materials to the playground

For the children growing up in this area, childhood is short. Child-arrests, even of children less than 12 years and thus illegal even under Israeli military law that is universally applied on the Palestinian population in the Israeli occupied West Bank, are not uncommon, as are humiliations and intimidations by the Israeli forces and settlers under the full protection of the Israeli forces.

The right to play, for Palestinian children, is only a theoretical concept, that often lacks any practical meaning, when growing up next to illegal settlements under a foreign military occupation. Playing on the streets of their neighborhood for most children is dangerous, as settlers do not even restrain from attacking children. In a nearby Palestinian kindergarten, Israeli settlers overnight stole a large role of artificial grass intended to be part of the play-area for the children attending the kindergarten. With no institution to address this, the artificial grass is merely lost and missing in the play-area.

The installation of the playground at Qurtuba school, thus, is a sign of hope for the Palestinian children. An opportunity for the children to be exactly that: children. To play with their friends and enjoy their childhood, have fun and laugh.