Mufeed Sharabati, 50-years, Shuahda Street resident compares living in the closed military zone (CMZ) with prison – just worse: “Life here is even worse than being in jail. A prisoner knows when his sentence is over. A prisoner knows when he can have visits. No-one knows that here. We are caught between checkpoints and soldiers with no idea when it is going to end.”

From his various experiences at Shuhada checkpoint, that he crosses about four times a day, he recounts: “One day my daughter was on her way home from school. She had to go through Shuhada checkpoint, but when she entered the box, they closed the door behind her and locked both the doors in the interrogation box. This was at a time when many people were shot and had knives put next to them. I was afraid of loosing her, and she was terrified of the checkpoint after that. The soldiers checked her bag and eventually let her pass, but the fear and humiliation does not go away.”

8-year old Haitham Abu Aisha explains that life in the Tel Rumeida neighbourhood inside the closed military zone for him is difficult, and they get a lot of harassment from settlers. Sometimes they would park their car in the only entrance for the family to reach their house, blocking the entrance and preventing them from reaching their home. “They beat me, once they threw a stone at my head”.

Not only the way to his house is full of obstacles and dangers, also the way to school is difficult for him. When going to school, he has to pass a military post on Shuhada Street and go up stairs that only the school-children are allowed to pass, but sometimes the soldiers would not let them pass. Just like on the 10th of May, when they arbitrarily decided that the girls were allowed to go up, but not the boys. After about 15 minutes of the teachers discussing with the soldiers, they were finally allowed to go up the stairs and start their school-day. He recounts how one day on his way home from school he was followed by a settler that had a knife.

When asked for his wishes and hopes for the future, he says: “ I want the settlers to leave and not see any checkpoints anymore.

When the checkpoints are open, Sundus and many others often have trouble going in and out of them. “It is sometimes difficult to pass the checkpoint because of some specific soldiers. They search me, search my bag and sometimes shout at me. Also the Palestinians living in the area have been giving numbers by the Israeli military, which makes us able to get in. Anyone without a number is not allowed.” For Sundus’ family and the other families in the CMZ, this means that they can not have family and friends visit them.

There is not any logic to who are stopped or when there are delays “it depends on the mood of the soliders”, explains Arwa. “Last month we were left in the rain for hours”, recounts Sundus.

Another resident in the Tel Rumeida neighbourhood within the closed military zone is 7-year old Yara. For her, both her home and the way to school is difficult, mainly because of settlers, but also the soldiers. “I feel scared of the settlers, once a soldier pointed a gun at my father”.

On the way to school, all the children gather to go to the school as a group with the teachers. “When I am with my teacher at a checkpoint, I’m not scared, but when I am alone, I am”. For Yara, on her way to school, she has to pass at least three checkpoints daily each way.

But even her home is not safe from harassment by Israeli forces. “Once when we were not at home, soldiers broke our door and got in the house”, she recounts. When they got back home, soldiers had not only broken the door, but also their wardrobe. In the H2-area of Hebron, that is under full Israeli control, both soldiers and settlers enjoy complete impunity for their deeds and there’s no way for Palestinians to address any of these crimes.

An old man trying to get through a checkpoint to his home.

Headmistress of Qurtuba school, Nora Nassar, about the hardships of having to navigate through a closed military zone and past settlements on the way to and from school and the basic human right to education of every Palestinian child.

On a personal level, the implementation of the closed military zone affected 22-year old Sundus a lot. Sundus explains: “At first it 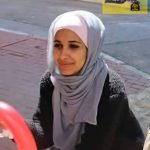 had a really bad effect on me and also on others living in the area. I felt really scared walking in the streets because of the increased amount of Israeli soldiers and the many settlers in the area. Sometimes, I even stayed at home from university, because of the fright from the closed military zone and the chance of the checkpoint being closed going back home. I do not feel free living in here.”
On her way to university, where she studies to become an English-teacher, she has to pass both through Gilbert checkpoint and Shuhada checkpoint. After the closed military zone was implemented, Israeli forces have started shutting down checkpoints on a regular basis. This leaves people in a situation, where they have to use alternative ways. These often include climbing over walls and walking through agricultural land.

Marwan is a 12 year old boy who describes very precise, how the closed military zone deprives him from his childhood, being exposed to violence at any time

Ramzi, 21, talks about being a student and young man living inside the closed miltary zone on Shuhada street 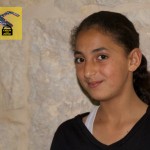 Children under 16, that do not have an ID, are not assigned a number like their parents and are thus not degraded to a number – but can also not prove that they are ‘registered’ residents in the closed military zone. Instead, if ordered by soldiers, they have to show their birth certificates.
13-year old Marwa explains: “I was once asked to prove that I live in Tel Rumeida. The soldier told me to go home and get my birth-certificate and come back. I never went back, but since then, I always bring it in my back. It does not say where I live, but there is a number on it, that they can check in the computer.”
Since the closed military zone was implemented, Marwa has become more scared of going to school, because of the checkpoint. She does not feel safe and the whole set-up of the checkpoint is frightening, as she is inside a ‘box’ where no-one on the outside can see what is happening to her.

Watch an interview with Marwa: 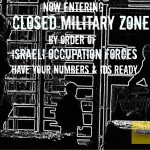 To live under a closed military zone (CMZ) is something extremely stressful, annoying and unpleasant. We are few, yet many families living under this system, which was implemented half a year ago. To live under a CMZ means that you can not obtain your very basic rights, which was a problem even before that; the Palestinians who are living in H2 area in Hebron (under total Israeli control) are suffering from so many restrictions. For instance the Palestinians who are living here can not welcome visitors to their homes, no family members nor friends are allowed to enter the closed military zone unless they are registered as numbers at the checkpoint. The people who are living here can not get plumbers or electricians into their houses for repairs, some families may need to take their fridge out of their house in order to fix it then returning it, but unfortunately they cannot take their house out of the CMZ to fix it.
The CMZ is a crime against humanity, a crime against civilians whose fault is that they were born as Palestinians. Non of these families participated in any kind of violence against the soldiers or the settlers, but their life is miserable because of something that they are not responsible for. It is important that the world wakes up, and stops this crime, as the developed countries are signing their conventions about human rights, they must put pressure on whoever is violating these rights.
– Abd Elrahman Salayme, Shuhada Street resident

10-year old Aisha about her life in the CMZ 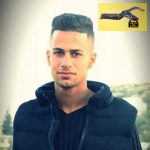 My name is Ahmad Azza, I’m 16 years old and I live in an area called Tel Rumeida, in the H2 area, under full Israeli military control in Hebron. Every time I go to school I have to pass 2 checkpoints. I can’t be free even in my area, I can’t go anywhere because of the soldiers and checkpoints. I live with my family next to Ramat Yishay illegal settlement (or Tel Rumeida settlement). We were attacked by Israeli settlers many times – physically, or they would throw stones, eggs and dirty water. They can easily attack eany Palestinian and soldiers would do nothing about it.
Last month, it was the worst month in 2015/16 in Palestine in general, and in Tel Rumeida and Shuhada Street in Hebron in special, because of the killing of Palestinians by Israeli forces in my area. The army closed the checkpoints, arrested many people without any reason and now the area is a closed military zone (CMZ) – no one can visit us. Only the Palestinians who live in this area can pass the checkpoint with special numbers assigned by the Israeli army and by their ID numbers. Anyone that has not been given a number – even if they live inside the area, is not allowed by the Israeli army to enter inside the area. The situation since the CMZ is getting more and more difficult.

14-year old Mu’awya talks about the fears of living in the closed military zone in Tel Rumeida in Hebron.