Yesterday, 9th May 2016, the Mayor of Hebron and several employees of the municipality of Hebron visited the closed military zone in Shuhada Street and the Tel Rumeida neighbourhood in the framework of the Open The Zone campaign. 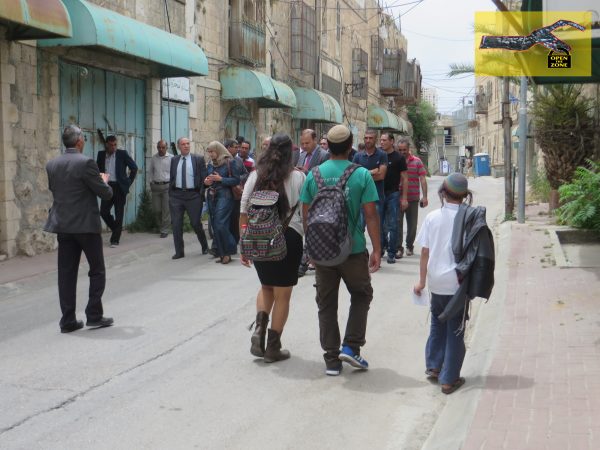 The delegation on Shuhada Street, with Shuada checkpoint in the background and a group of settlers passing them

The delegation from the municipality arrived to the neighbourhood through the Gilbert checkpoint, where they were surprisingly allowed to pass despite not being registered as numbered residents in the area. During their visit, at several points they were denied to continue by Israeli forces. Walking on the tiny strip of Shuhada Street still accessible to Palestinians, they were denied to go up the stairs to Qurtuba school that for more than half a year have been closed for any Palestinian, despite them stating their function as a delegation including the mayor of Hebron. When trying to walk down the same stairs from up near Qurtuba school, they were again denied passage by the Israeli forces. 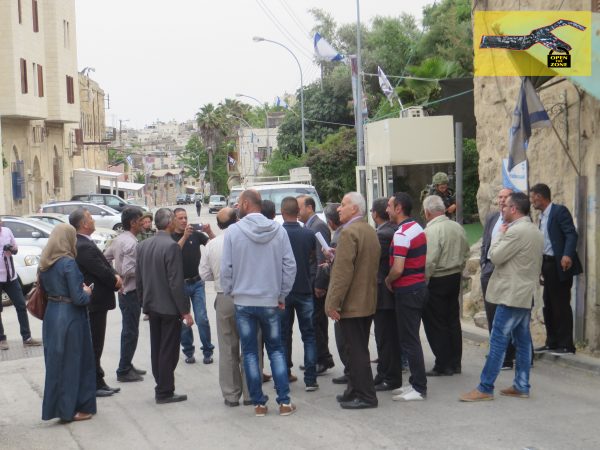 Delegation detained at the stairs leading to Qurtuba school

The delegation visited several families that have been living under closure in the closed military zone (CMZ) since 1st November 2015, and listened to the demands of the families. Additionally to electricity and water-connections for the Shuhada Street kindergarten, this included an ambulance, as recently several Palestinians in need of an ambulance were denied this medical assistance by Israeli forces, at times for ridiculous reasons such as ‘it’s Shabbat’. This problem has been long-running, as in the whole area, even before the CMZ, Palestinian vehicles – thus including ambulances – are not allowed to drive. With the CMZ ambulances are now required to get additional permits – additional to the permits to be driving on this settler-only road – before being allowed to enter the CMZ.