On Friday 25th March, Palestinians, Israeli activists and foreign activists alike took part in the weekly demonstration to oppose the apartheid wall that surrounds the town of Ni’lin and has taken much of the villages land. The demonstration which started peacefully was cut short by large amounts of tear gas being fired upon the demonstrators, along with sponge bullets and rubber coated metal bullets; the standard excessive force that is always used by the Israeli army. 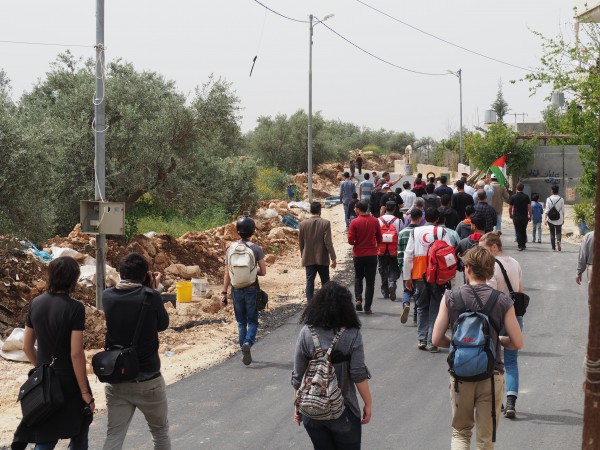 The demonstration began after noon prayer,  with the crowd walking along the local roads, chanting songs of defiance. Within minutes the first rounds of tear gas were fired by the Israeli army who had made their way deep into the Palestinian territory. The first shots were fired high into the sky, landing in front and around the demonstrators, this caused slight pandemonium and the demonstrators were forced to fall back. As the protestors were running, seeking clear air to breath amidst the heavy plumes of tear gas, the army began firing their frequently used and at times deadly high velocity tear gas canisters. These canisters were not fired in the arching fashion in which they should be, instead being fired directly at disbursing activists from all sides. The canister being used are the same type as the ones responsible for the serious wounding of fellow ISM activist Tristan Anderson in Ni’lin who suffered cognitive disfunction and physical injuries after he was shot by the Israeli forces from close range. 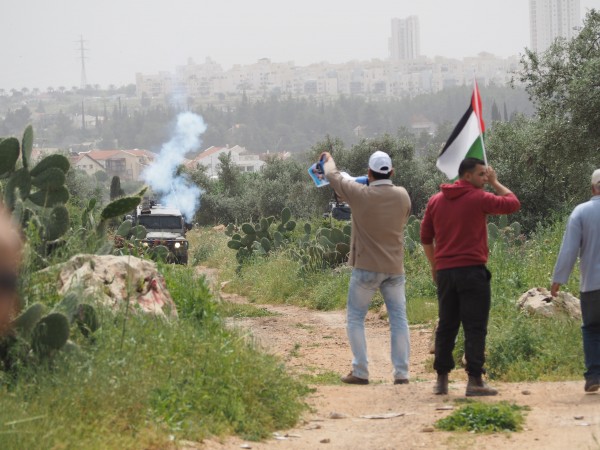 The Israeli forces and peaceful protesters 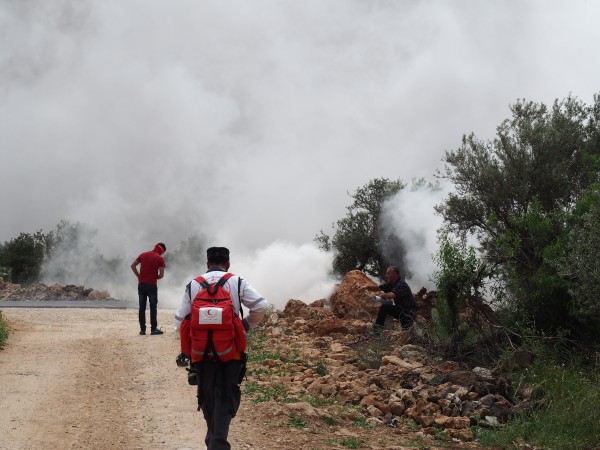 An activist and a medic amidst heavy clouds of tear gas

As demonstrators continued to pull back the Israeli forces continued to fire directly at the crowds rather than upwards, choosing to ignore the correct protocol for use of this deadly weapon. From this point on, some of the local Palestinian youths began to throw stones which prompted Israeli army to begin using sponge and rubber coated steel bullets. 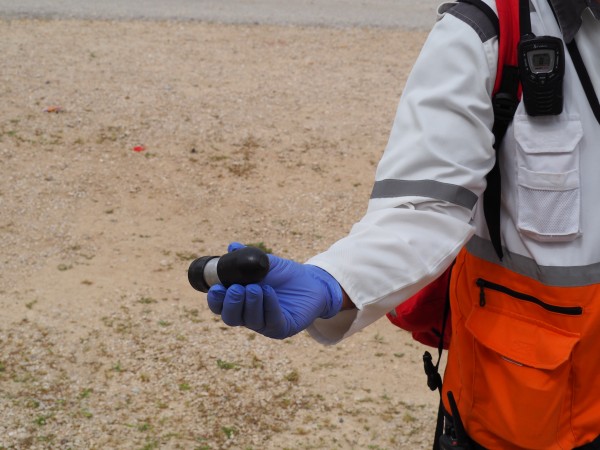 As the activists were driven back, the only remaining resistance was the stone throwing children. While soldiers on the front line fired upon them a different section of the army began systematically firing high velocity tear gas canisters into the surrounding homes of the area.

Two ISM activists at the demonstration were driven into one of the nearby homes amidst the aggression and counted seven tear gas canisters land inside the families property. The Red Crescent ambulance service was also required to evacuate and treat another two Palestinian families due to heavy tear gas inhalation inside their families residencies.

The move by the Israeli army to fire on the houses of the local towns people is a strategy  to create decent amidst activists and the locals, hoping that they will end the demonstrations via a certain style of collective punishment.

One Palestinian was treated for injuries sustained from being shot with a rubber coated steel bullet while seven people, including women and children were treated for severe tear gas inhalation whilst inside their family homes.