The anniversary of Tristan Anderson and the ongoing struggle

On the 13th March 2009 around 4:30pm, Tristan Anderson, an ISM volunteer from the US was critically wounded by the occupying Israeli forces while peacefully demonstrating against the ongoing occupation of the West Bank village of Ni’lin. The wounds he sustained were from a high velocity/long range tear gas canister that was used against him at a distance of around 50-60 meters. 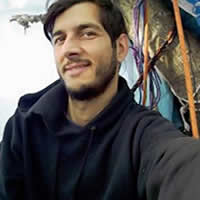 Sunday the 13th of March will mark 7 years since his wounding and represents the ongoing struggle for justice that Tristan, his family & friends and the people of Palestine face against the occupying forces and their tactics to perverse the course of justice.

Tristan was 38 years old in 2009 when he was severely injured. Tristan’s girlfriend, Gabrielle Silverman, an American-Israeli who witnessed the ordeal was quoted as saying:
“We were at a demonstration against the wall, against the Israeli apartheid wall in the West Bank village of Ni’lin, which is about twenty-six kilometers west of Ramallah. I was very close to him when he was shot. I was only a few feet away. The demonstration had been going for several hours. It was wrapping up; it was almost over. Most people had already gone home. We were standing on some grass nearby a village mosque, and Tristan was taking pictures [when] he was shot in the head with the extended range tear gas canister.” 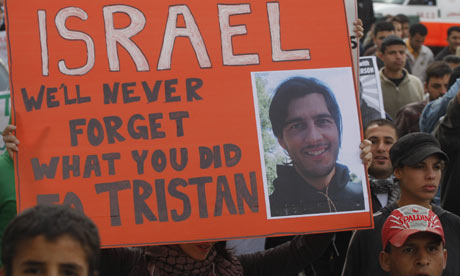 Jonathan Pollack, an Israeli activist with the group “Anarchists against the Wall” who was also at the demonstration in Ni’lin said Tristan was hit at around 4.30pm inside the village, at least 1km from the barrier. However, as is often the case at many of the protests, there had been stone-throwing. He said Tristan had never thrown any stones or taken any violent action towards the soldiers {engaging in any form of violence is strictly forbidden within the codes of conduct for ISM volunteers}.

It is reported that for hours before he was shot, Tristan was nowhere near the annexation wall. The weapon at the time used on Anderson had only recently began being used by Israeli forces against West Bank demonstrators. It comes in a black canister labelled in Hebrew “40mm bullet special/long range”, and is silent when fired, according to demonstrators. The instructions of use for tear-gas is to be fired in a bow above – and not directly at – protestors.  It is reported that Anderson was hit from a distance of around 60 meters, well short of the parameters for ‘long range’, which has the capacity to be fired around 400 meters. 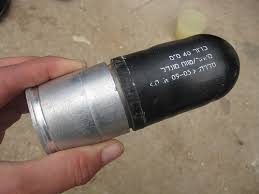 The type of canister used on Tristan 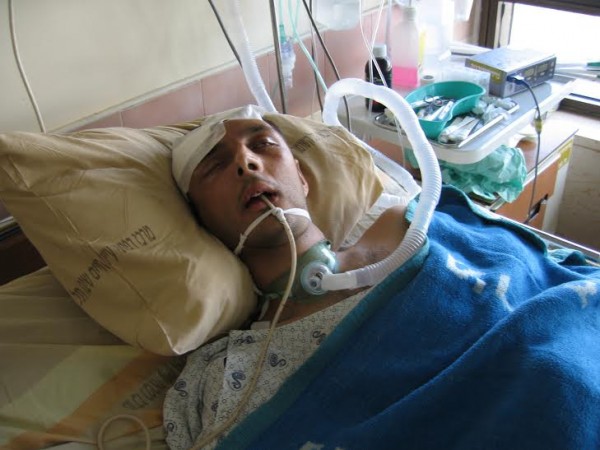 Tristan in hospital after his shooting

Years later Tristan continues to require around the clock care because of cognitive impairment and physical disability. He is also paralyzed on half his body and uses a wheelchair.

Whilst initially there were no charges laid against Israeli military, new evidence emerged showing the officer responsible for incident. “Sergeant Jackie” is named as the border patrol officer who shot Anderson in the clip filmed by a Palestinian activist from Ni’lin. An Israeli state attorney was then able to identify Jackie, whose face is not clear in the clip, by applying facial recognition software.

Just as important as identifying Anderson’s shooter, the video also shows that the border patrol unit Sgt. Jackie was at a distance much less than the distance stated in the testimony given during the military investigation. The video also displays a clear example, showing how far the Israeli military is willing to go to lie, cover up and try to protect their story.

The Israeli military described the protest as a “violent riot”, saying that “approximately 400 rioters threw a massive number of rocks at security forces”.

“Israel regrets that the Israeli and foreign nationals co-operate with violent rioters against the building of the security fence, whose purpose is saving the lives of Israeli citizens,” it said. “As such, any Israeli, Palestinian, or foreign national who illegally participates in a violent demonstration takes upon himself the risk of personal harm during the dispersal of these disturbances.”

Supporters of Anderson hope the new evidence will be instrumental to both his current civil suit, as well as re-opening a criminal investigation against the Israeli military. “Both sides,” said Silverman (Anderson’s girlfriend), “have a political point to make in the courtroom,” explaining the case is in part about negligence, and in part about Israeli’s systematic use of violence against Palestinians.

Just one month after the shooting of Tristan Anderson, 30 year old Bassem Abu Rahme was killed from a tear gas canister that was shot directly at his chest at close range by an Israeli soldier. The Israeli military insists on not indicting the security officer who killed Bassem Abu Rahmen, despite being provided with enough details to find him.

The silence that ensues the actions and lack of justice brought upon the Israeli forces, the so called ‘most moral army in the world’, is defeaning. One must question the international communities role in negligence and ponder why the excessive use of force, the continuous cover ups and the criminal actions of the Israeli military’s actions remain unquestioned on an international level and are being allowed to continue without serious investigation or global condemnation.